“Wildlife is thriving in lakes contaminated by the 1986 Chernobyl disaster, with both overall numbers and species diversity holding up well. Any harmful effects from radiation appear to be negated by the benefit of the absence of humans.”
From New Scientist, Apr 30/11.

“In 1348 the medical school at the Sorbonne decided that warm water opens the pores and allows disease to enter. And from then on, for about four to five centuries – depending on where you lived … [b]aths were looked upon as things to be taken only as desperate remedies: a medical necessity prescribed by doctors.

“During this long bath-phobic period of human history, people who were fastidious in their personal hygiene habits were thought be particularly odd and noteworthy. The well-known 19th-century dandy Beau Brummel scraped himself all over with a brush every day and took baths in milk. … Although he was considered to be exceedingly strange, Brummel was well connected in the upper echelons of society, and his new ideas came to have considerable influence. It was he who started the trend of tailored suits and ties for men that continues to this day, and by the time he died, it was much more fashionable to be clean.” From Slow Death by Rubber Duck: How the Toxic Chemistry of Everyday Life Affects Our Health, by Rick Smith and Bruce Lourie (Vintage Canada, 2010).

“If peahens (Pavo cristatus) tally eye-spots on their suitors’ tail feathers, they do a sloppy job. As long as the male displays about 140 spots in his gaudy train, extras do not improve his chance of mating. … Researchers confirmed that, among feral peafowl in North America, snipping out 20 spots wrecked males’ prospects for mating. But few peacocks were naturally so plain. Most displayed 144 to 169 eyespots – and within that acceptable range, hens relied on some other cue (still unknown to science) to rank their suitors. From American Scientist, Jul-Aug/ 2011.

“Ever since he was discovered in the Italian Alps in 1991, Ötzi, the 5200-year-old Iceman, has been dishing out information about Neolithic life. Researchers … sequenced the DNA of animal fibres in the Iceman’s stomach to reveal his last meal: the meat of an Alpine ibex.” From Science, Jun 24/11.

Chesapeake Bay “…now yields about 1 per cent of the 15 million bushels it did annually around 1885. The phenomenon is not limited to the bay. Worldwide, 85 per cent of natural oyster reefs are gone. Those that remain are about 10 per cent as productive as they were during their historic peaks.” From Shucking open a tale, by Michael Anft, in Johns Hopkins Magazine, Summer/11.

“While exploring Australia’s Great Barrier Reef, professional diver Scott Gardner snapped the first photographs of a wild fish using a tool. Gardner found a foot-long blackspot tuskfish (Choerodon schoenleinii) holding a clam in its mouth and whacking it against a rock. The shell gave way, and the fish gobbled up the bivalve, spat out the shell fragments, and swam off.” From Science, Jul 15/11.

“The truth of the matter is that lawns are giant pesticide guzzlers. They consume 90 million pounds of pesticides and herbicides each year in the United States. In a strange coincidence this is also the amount of chicken wings consumed on Super Bowl weekend…” From Smith and Lourie, op. cit.

“Grim warnings about climate change may prompt more skepticism than action, simply because they seem unjust. Portraying children as innocent victims, for instance, conflicts with common assumptions that the world is fair – a clash that might trigger doubt and inaction. Indeed, a recent survey showed that that the stronger one’s belief in a just world, the greater one’s skepticism after reading a grim global warming article (but not an optimistic one that also presented solutions).” From American Scientist, Mar-Apr/11. 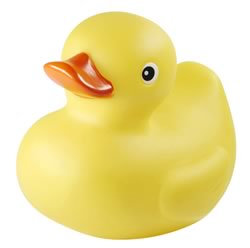 “Speaking of the Federal Government, it’s been busy passing rigid new standards surpassing those recently adopted in the United States to get lead and phthalates out of children’s toys. Not everyone is happy about this progress. The National Post, for instance, has launched a new award in our honour. The ‘Rubber Duck Award’ will now be given out annually to recognize the scientists, environmentalists, politicians and journalists who each year advance the principles of so-called junk science. We predicted a response like this and are delighted to report that having spawned the ‘Rubber Duckies,’ we are the first recipients of the prize.” From Smith and Lourie, op. cit.

“During their heyday, alchemists may not have successfully spun gold, but they created cosmetics, dyes, liquors, pharmaceuticals, and pigments. They analyzed metals, created artificial fertilizers, and tested hypotheses that proved pivotal in the development of science.

“Crystallization, distillation, sublimation – all techniques for working with substances that are still in use today – were developed by practitioners of the alchemical arts, who plied their trade from 300 bc, when they emerged in Greek-speaking Egypt, until they were discredited and given the existential stage hook by scientific academies in the early 1700s.” From Johns Hopkins Magazine, Summer/11.

Best Day of Your Life?

“It was a night.”
Brigitte Bardot.