Letters published in the WINTER 2011 edition of In The Hills magazine. 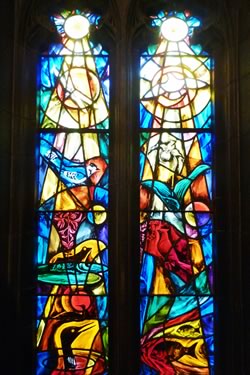 As you enter this tiny, non-denominational chapel, her strikingly beautiful window is directly before you. I occasionally give tours of the university to relatives, friends and students, and Rosemary’s window (shown right) is one of my favourite stops.

The article Worms in the Woods by Chris Wedeles (Autumn 2011) was really interesting, but it raised a lot of questions.

1) If North American worms were wiped out by the glaciers, presumably there’d be a “worm line” 100 km or so north of the southernmost point of glaciation. South of that, you’d have American worms (and plants that have co-evolved with them); north of that, not. Is that actually the case?

2) Surely a lot of these trees in Canada are identical to, or close relatives of, tree species that have evolved in the presence of worms?

3) Trees in Europe seem to manage in the presence of earthworms. How does that work? Duff layers seem to exist in European forests. What’s different in North America?

If you can point to a paper or papers on these topics, I’d be very interested.

Yes, there is a “worm line” at the southern glaciation line. To see a map, and for more information, go to Great Lakes Worm Watch: nrri.umn.edu/worms/. The key point is that northern forest communities did not evolve with the same worm community with which they now exist. As is often the case with exotic species, they do not exist “in balance” (a phrase I don’t really like, but is illustrative in this case) with the ecosystems in which they are introduced. Impacts become exaggerated. So while native earthworms do consume organic material, their numbers and impacts are not devastating.

Forests and other ecosystems have had thousands of years to “adjust” to native earthworms. No such adjustment has happened in the mere ecological span of 200 years since introduction of exotic worms began. Conservation biologists consider the two most severe ecological issues to be loss of habitat and introduced species. Sadly, I suspect the long-term impacts will be more severe than those we have witnessed so far. 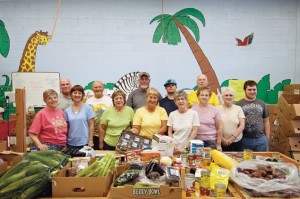 Thanks for opening my eyes a little more about the people living in their vehicles (Empty Plates, autumn 2011). That’s reality. I know people who have had to do that to survive. The cost of rental is extremely high and I cringe every time I have to go into the grocery store. If items are not on sale, I usually can’t afford to buy them anymore. Being a full-time student, my household bills keep getting behind. I’m 44 years old, with a whole lot of work experience. It is very difficult to get a job in Orangeville. It is expected that you will work at the employer’s insistence, all the shifts. This causes so much havoc with single parents, daycare issues and those with medical issues. They don’t seem to care. What happened to being hired for the same eight-hour shifts so that the employee could organize family time, health and rest, and feel accomplishment. Instead, they are considered to have a job, but don’t know if they will get enough hours to put a meal on the table, apart from the other necessities. This leads to depression in the community. I feel the way to help solve some of this issue is to go back to the old work hours.

In his letter to the editor (autumn 2011), Dave Frantz stated, “Thanks to this article [spring 2010], we were able to identify, without doubt, the American bittern sitting in our tree.” Unfortunately, the bird he photographed was a green heron. The rust and white striped breast, yellow eye and yellow under the lower mandible are far more distinctive characteristics for this bird than the straw and brown striped breast of an American bittern. I’ll bet the past article was a good one regardless.

The picture of the bird sent by your letter writer in the autumn issue, I believe, is a green heron, not an American bittern. To start with, it is unusual, although not unheard of, for bitterns to roost in trees. Second, the markings and colours match a green heron.

Compare the pictures above. Notice the distinctive cinnamon colour on the neck of the green heron (which is clearly visible in the picture in the magazine), and the white stripe running from the throat.

This has been a good year for green herons and I have been lucky to spot many in several different locations within Caledon. Bitterns are more elusive and I have only seen one or two this year.

I love In The Hills and look forward to each issue.

It was a bittern pill for us to swallow, but thanks to the many avid readers and birders who took the time to set us straight.

More on the Mega quarry 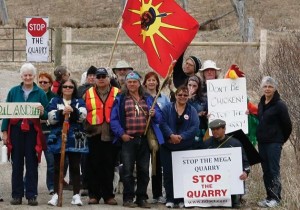 The Walk to Stop the Quarry. Photo Jason Van Bruggen

I enjoyed Tim Shuff’s article Birth of A Protest (summer 2011) very much. It was both thought-provoking and a bit frightening. Are we really prepared to accept the damage to the area, the known and unknown risks associated with such a project? I hope not.

One of the most typical justifications for such an undertaking is that the province of Ontario needs this material for buildings, roads, etc. There is some merit to this argument, if the materials are solely for consumption within the province, perhaps Canada. However, I was disappointed that the article does not emphasize that The Highland Companies are in the process of purchasing a railroad to Owen Sound. Does this not lead to the conclusion they will be destroying our land, water and environment only to ship material abroad? This being the case, how does this project really benefit the people of Ontario?

I’m extremely grateful and appreciative of the work Tim Shuff and others are doing in regard to the Melancthon mega quarry. We certainly are getting an education on the provincial aggregate industry. Somehow or other the establish-ment of the Melancthon mega-quarry must be prevented. It is a recipe for disaster and would dev-astate the area if it went ahead. We have to put the opposition to it on a war footing.

The Highland Companies should stick with “taters” and not get approval to proceed with the highly risky business of “craters,” nor attempt to manage and control the large volume of water on a daily basis that will be required during the quarry’s operation. Also the real threat of water contamina-tion that could affect many, many people and all life forms cannot be contemplated.

I read with misgiving the letter from your correspondent, Nick Cox, published in your autumn issue. He bitterly criticized the article about the proposed Melancthon quarry because it presented data in a format unacceptable to him, and he stated that he discontinued reading the article at that point.

We all, of course, have the right not to read authors of whose style we disapprove, but Mr. Cox seems to be implying that because the format is, in his view, incorrect, ergo he can learn nothing from the article.

To believe that one cannot learn from a writer who presents information in a form different from one’s expectations is, it seems to me, evidence of a closed mind; and I hope that in using the article to display to his students an instance of incorrect format that he will also impart his prejudice.

Perhaps if Mr. Cox had taken thought that he was reading a magazine of general interest to the average country dweller, and not a scientific journal publishing hypotheses intended to promote debate among learned experts, he would not have been so censorious?

For more reader response to Tim Shuff’s articles, Birth of a Protest, Mega Quarry by the Numbers, and Can Gravel Be Green, see the comments section at the end of each article

Our apologies to carriage driver and trainer Kirsten Brunner, and anyone who tried to call her, for the error in the phone number for Beaverwood Farm in our autumn issue (Good Sport: Putting the Cart after the Horse). The correct phone number is 519-833-7169. For more information, see beaverwoodfarm.on.ca.