The Florence Nightingale of Newfoundland

Nurse Myra Bennett travelled by foot, horse, dogsled and boat, she provided isolated communities with their only source of medical assistance. 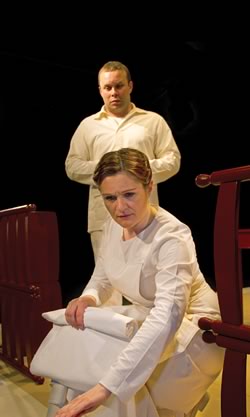 House calls. Not too many decades back, doctors spent half the day in their “surgery” or clinic and the rest of the day travelling rural roads, often battling inclement weather to make house calls to those who could not or would not come to them.

Those days are long gone, but Tempting Providence, a play that will be presented in Orangeville by Theatre Newfoundland Labrador in February, offers a glimpse back at one remarkable woman who devoted her life to the ultimate in house calls.

Tempting Providence is the true story of nurse Myra Bennett. Dubbed “The Florence Nightingale of Newfoundland,” she patrolled 320 kilometres along the rugged coastline of the Great Northern Peninsula. Travelling by foot, horse, dogsled and boat, she provided isolated communities from Sally’s Cove to Port aux Choix with their only source of medical assistance.

Born in 1890 in London, England, single, 30-year-old nurse Myra Grimsley had originally planned to emigrate to Saskatchewan. However, she was persuaded to come to Newfoundland by the picture of dire need there, as described to her personally by the wife of the colony’s governor. Her original two-year contract paid $75 a month. She married ex-merchant marine Angus Bennett within a year and settled in the remote coastal village of Daniel’s Harbour, which became her base for the rest of her life.

“This is a play about a stranger in a strange land,” says Robert Chafe, the St. John’s playwright commissioned by TNL to write the piece, “so my approach all along was that we get to see the land, and all the challenges that come with it – the weather, the distances – through Myra’s eyes, to have her tell us what she is seeing, to paint that picture in our mind’s eye.”

According to artistic director David Nairn, this presentation is a first for Theatre Orangeville. “We co-produce with a lot of theatre companies in Ontario, but this is the first time we have partnered with a theatre outside the province.”

One of Theatre Orangeville’s long-range goals is to take its own uniquely local productions and showcase them further afield – provincially, nationally and possibly internationally. TNL already tours extensively, so Nairn looks on this artistic partnership as an opportunity for Theatre Orangeville to learn the tricks of efficient touring.

Since the premiere of Tempting Providence in Newfoundland in 2002, TNL has presented 460 performances to more than 70,000 people across Canada and internationally in Ireland, England, Scotland, Tasmania, Australia and the U.S.

David Nairn saw the show last year at the Gros Morne Theatre Festival in Cow Head, not far from Myra Bennett’s home, and fell in love with it.

“I thought it was spectacular and knew that our audiences would love it,” he says. “When we announced that we were bringing it to Orangeville, people in the community came forward to say they were from Newfoundland and they were thrilled we were doing a story set in the province.”

Indeed, Orangeville and environs seems to attract Newfoundlanders. One such transplant is Barb Hartley, manager of the local Scotiabank, who has made Orangeville her home since 2007. Barb hails from Long Harbour, on Placentia Bay. Having spent the majority of her life in Newfoundland, she acknowledges that life there is challenging.

“Although the weather is often horrible, on a beautiful day there is no nicer place to live. But now that I live in Orangeville, I could never move back – I’m getting used to four seasons!” she says.

Barb grew up in the 1950s and ’60s hearing stories of courageous local pioneers like Myra Bennett and says she can’t wait to see the play. She recalls the isolation of living in a small outport where nearby communities were accessible only by boat. The “cottage hospitals” were more like health clinics than actual hospitals. She also remembers the “Christmas Seal,” an American torpedo boat purchased in 1944 by the Newfoundland Tuberculosis Association and converted to a floating tuberculosis clinic for the coastal communities of Newfoundland and Labrador. The Christmas Seal, which operated until 1971, derived its name from the sale of Christmas seals for fundraising. 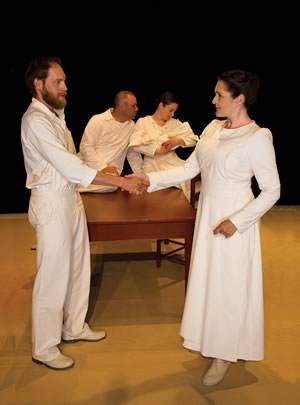 Nurse Bennett’s home in Daniel’s Harbour and the rugged coastline district she served were no doubt similar to those isolated communities Barb recalls. Lacking roads or railway to the outside world, their single connection was a coastal steamer that operated only in good weather. With the nearest hospital several hundred miles to the north, it fell to “The Nurse,” as she was known, to deal with all but the most critical situations. Myra Bennett estimated she delivered 750 babies, extracted 5,000 teeth and, in one of her greatest medical feats, reattached the nearly severed foot of her brother-in-law, saving his limb.

“Bennett was an incredibly private woman,” playwright Robert Chafe says. Although she kept journals and diaries, they reveal little about her emotions as she fulfilled her often arduous tasks, but Chafe found a conversation with her son Trevor enlightening. “Trevor told me that the only time he ever saw her upset was when she lost a child while tending to a birth. As for everything else, her loneliness, her frustration, I took great artistic liberties in extrapolating and filling in the gaps.”

However, a well-wrought script and compelling subject matter can still fail to come alive without inspired direction. That magic touch has been brought to Tempting Providence by director Jillian Keiley, who joined Chafe early in the creative process and conceptualized the production’s austere staging.

“With Jill Keiley’s clean and brilliant direction, a description of a storm and nothing but an overturned table and chairs becomes as telling and evocative as film footage,” Chafe says.

Myra Bennett died in 1990 at the age of 100. During her life she received many awards for her work, including an honorary doctorate from Memorial University and Member of the Order of Canada. When not tending the sick and injured, she found time to raise three of her own children, four foster children, be involved in the church, make her own bread, tend garden, milk the cows and make clothing. Her house in Daniel’s Harbour, built by her husband, along with the 1942 addition of a clinic, was designated as a heritage site in 1991.

It may be no wonder that Newfoundlanders feel such pride and enthusiasm in the retelling of Myra Bennett’s story. But why has the story of a modest rural nurse been such a success worldwide?

Jillian Keiley has witnessed audience reactions first-hand and offers this response: There is something in the story of a person facing the challenge presented by true isolation that resonates with regions of the world that have their own version of remoteness. Rural Ireland and Tasmania, and many parts of Canada especially, understand the fortitude it would take to manage such an impossible job. Many people also relate to this story of an immigrant who finds herself in her own brand of isolation in her new community. Myra’s strength and courage is pretty inspirational, no matter where you are from. 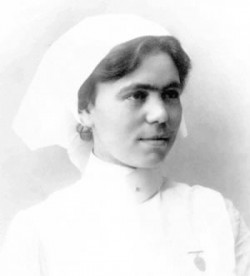 “We left on April 13th, 1921 – Friday the thirteenth. It was a grey day over Liverpool and nobody seemed to be happy. The transport workers were threatening a strike and this had moved the shipping fi rm to schedule their departure date one day earlier in order to avoid a work stoppage. The men who were stowing the freight were being rushed a bit to get the ship ready for sailing, and they did not like it. One, a doleful Irishman, was even predicting disaster for them. “It’s tempting Providence, it is!”

—From Myra Bennett’s diary, on her voyage from England to Newfoundland

Tempting Providence will be performed at the Town Hall Opera House from February 23 to March 11, 2012. For times and ticket orders, 519-942-3423; theatreorangeville.ca

Michele Green is a freelance writer who lives near Belfountain.
Show 5 Comments

She delivered 750 babies, extracted 5,000 teeth and, in one of her greatest medical feats, reattached the nearly severed foot of her brother-in-law, saving his limb.