The Food of Love

Bridgitte says chocolate is also great brain food. It can shift your consciousness, making you feel better. “But,” she warns, “brain-activating chemicals are very heat sensitive.” 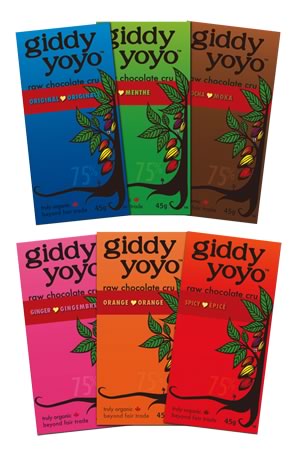 Joan Sewell’s 2007 book, I’d Rather Eat Chocolate: Learning to Love My Low Libido, caused controversy of orgasmic proportions. But while Sewell may prefer chocolate, studies indicate that, at best, women are drawn equally to the two elixirs. A 2010 survey of 1,000 women (by Neff, Saatchi Wellness and Time Inc.) discovered most (73 per cent) would opt for great sex once a week for five years over free chocolate every week for the same period.

But that statistic hasn’t stopped Bridgitte Longshore and her partner Mark Handy from launching Giddy Yoyo, a line of handmade raw and organic chocolate bars they make in the certified “little factory” attached to their Mono home. They began retailing the chocolate bars in April this year, piggybacking them on the line of sprouts (grown in a greenhouse also attached to their house) and superfoods they’ve been selling since 2009 (under the company’s former name, M & B Alchemy). “Chocolate is the most pharmacologically complex food,” Bridgitte explains, then ponders, “Is it a food or a drug?”

The newly constructed “little factory” is 2,000 square feet of dedicated space complete with a stainless steel kitchen, state-of-the art equipment, office, sales room, storage area and even a dumb waiter to move product from one floor to the other. The set-up could churn out 2,000 bars a day. Although they don’t yet produce that volume, they’re on the way with recent orders totalling 12,000 bars from an American-based company.

Oscar Franco, one of the study’s authors, said, “[There are] antioxidants, flavonoids … many chemicals that come together, interact with each other, so they can produce a beneficial effect.” The authors did not specify the amount of chocolate a person should consume, but Franco warned, “Moderation is key. Everything in excess will have a deleterious effect on your health.”

Superfoods, a term coined in the 1990s, denote foods that are packed with health-giving compounds, especially antioxidants, which are believed to fight cancer. Chocolate is a relative newcomer to a list which includes spinach, blueberries, broccoli, garlic, salmon and more. Bridgitte says chocolate is also great brain food. It can shift your consciousness, making you feel better. “But,” she warns, “brain-activating chemicals are very heat sensitive.”

That explains the lengths Bridgitte and Mark go to make their “raw” chocolate bars. Their cacao, from which chocolate is derived, comes from Ecuador. It is heirloom Criollo Arriba Nacional cacao grown at high altitudes in volcanic soil. The product is “beyond fair trade,” according to Giddy Yoyo’s extensive website, and is produced by their partner Robert Williams.

An American expat who lives in Ecuador, Williams has the cacao picked from wild trees, carried down the mountainside by donkey, and then transported to his factory near the port city of Guayaquil. There the beans are fermented, sun dried and crushed into cacao nibs, which are then transformed into a hardened paste for export to Canada. This unprocessed chocolate, along with cocoa butter and raw cane juice crystals, are the only ingredients in Giddy Yoyo’s 75-per-cent chocolate bars. Along with their traditional bar, they make five others, flavoured with essential oils: ginger, mocha-cardamom, orange, mint and spicy (warm cinnamon and cayenne).

But before chocolate can be poured into moulds and packaged up, it is warmed to 114°f. For a food to be called “raw,” it can be heated up to 115°f. People involved in the growing raw-food market claim heat obliter-ates much of what makes our food good for us, and chocolate is no exception. Chocolate made with roasted cacao has health benefits, but not nearly as many as Giddy Yoyo’s raw chocolate, according to Bridgitte. She cautions, though, that because heat kills the bacteria and fungus that cacao is prone to, buyers should only purchase raw chocolate with a reliable brand.

On their website, Bridgitte and Mark point out many misconceptions and misinformation about chocolate. It “is often held wrongly responsible for or contributing towards cavities, obesity, acne, migraines, allergies and diabetes. In almost all cases refined sugar is the true culprit.”

Giddy Yoyo chocolate bars are available across the Greater Toronto Area and a growing number of locations across Canada and the USA. Bridgitte, who looks after sales, says they are targeting the “yoga market,” because it is largely made up of health-conscious people who will pay about $5, the typical amount charged for a 45-gram bar.

The price doesn’t deter customers who frequent Euphoria Café on Broadway in Orangeville. Owner Kim Webb says she has people who come in to specifically buy them. Kristina McLean, an Orangeville resident with a fitness consulting business called Fuel Up Fitness & Nutrition, suffers from myriad food allergies. She’s addicted to Giddy Yoyo’s products. “I eat a half bar or more every day. I feel that people can eat them guilt-free and they taste great,” she explains, not long after crossing the finish line of Orangeville’s annual Terry Fox Run.

But Bridgitte and Mark, vegetarians both, are likely the best advertisement going for Giddy Yoyo. Despite having six kids between them, aged 4 to 16, they exude energy. I’d give my eye teeth for Bridgitte’s flawless complexion, clear blue eyes and cascading blonde hair. But she wasn’t always the community-oriented, fair-trade-abiding citizen she is today. “I used to live a life where I would go anywhere, do anything,” she explains. “I consumed a lot. It left me feeling very empty.” But that’s all changed. The duo now walks the talk.

Kim Webb says, “I buy their product not just because it’s a great product, but also because of who they are. They live and speak a healthy lifestyle.”

Studies on sex versus chocolate: