Beauty in the Beast

A peaceable kingdom – Beauty in the Beast is an extraordinary exhibition of animals in art and objects at the Dufferin County Museum & Archives.

Since Stone Age man first painted a creature on a cave wall, human beings have been working out their deep and complex relationship with animals through art. 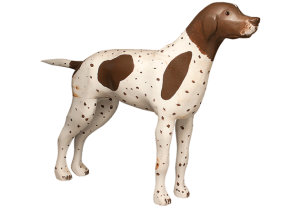 Just how ingrained is that relationship? According to a recent American study on childhood language development, “cat” and “dog,” along with “mummy,” “daddy” and “milk,” are among the 25 most common words a child first utters. And as all adoring parents know, before they’re three, most children can name every animal on Old MacDonald’s farm (and what they “say”), along with a host of other wild animals, many of them from far-off lands. Although they may never have seen the real creatures, they have met them through the art in their picture books.

Throughout the ages, humans have elevated animals as gods or vilified them as demons. Animals have been our playmates, our workmates, our slaves, the companion at our feet, the food on our table. In our contemporary world, they are increasingly valued as our fellow creatures on a small and fragile planet.

It is that last relationship that is the inspiration behind Beauty in the Beast, a truly extraordinary exhibition of animals in art and objects that runs from April through the end of the year at Dufferin County Museum & Archives.

Museum curator Wayne Townsend had been ruminating on the significance of the broad-based outcry against the proposed mega quarry in Melancthon. To him, it revealed just how intensely attached the community remains to the fields, woods, rivers and animals that define this region’s social and natural heritage. About the same time, he ran into a private collector who had previously shown portions of her vast collection of animal-inspired art in the museum’s exhibitions. She told Wayne she had been thinking it was time to move her entire collection into the public domain. And a show was born. 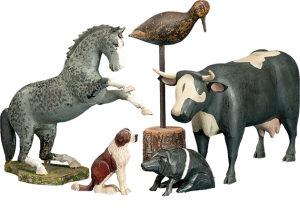 Along with fine art, Beauty in the Beast includes an extensive collection of historic and contemporary folk art pieces. Photo by Pete Paterson.

It took more than four weeks of flat-out effort to move, catalogue and install the collection of some 1,500 works. Acquired over a lifetime by a woman with both a passionate love of animals and an educated artistic sensibility, the works range from tiny ivories to large bronze sculptures, from highly formal portraits by British masters to engagingly whimsical Cape Breton folk art, from sophisticated dinnerware ornamented with animals to weather vanes and children’s rocking horses. Although they come from around the world, the majority of the works are Canadian (beavers are well represented), including several Ontario artists.

In this exhibition’s peaceable kingdom, horses and cows share companionable space with rabbits and foxes, dogs rub shoulders with cats, a plump hippopotamus does not feel out of place next to a sleek deer. A moose rides a motorbike and a beaver takes a walk on a leash.

Animals, domestic and wild, have always been an integral part of the daily life and culture of Dufferin, says Wayne. “They are at the very heart of the quality of life we so treasure.” And in the changing cultural makeup of the community, he adds, the human relationship with animals creates a common bond. 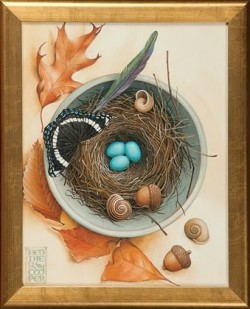 The Collection by Heather Cooper, 2005, oil on canvas, 8″ x 10″ Toronto artist Heather Cooper is a prolific painter whose work often features mythical overtones. She is perhaps best known for her fancifully detailed posters for the Canadian Opera Company and the Royal Winter Fair, as well as designer of the Roots beaver logo. Photo by Pete Paterson.

The donor of the collection (who wishes to remain anonymous) had considered other locales for the show, but settled on DCMA as the “perfect place,” in part because, “it’s in the country. Animals belong here.”

For the official opening of Beauty in the Beast on the afternoon of April 1, visitors are invited to bring their pets.

Linda McLaren:
A life with animals

This summer, Beauty in the Beast will include a show by Linda McLaren, whose Headwaters Sketchbook was a regular feature in this magazine for 15 years.

An Amaranth farmer, artist, naturalist and avid reader, Linda brought to the Sketchbook not only her delightful and detailed pen-and-ink illustrations of local flora and fauna, but her careful research notes and, inevitably, a literary reference that captured the essence of her wild subjects. Linda retired her column in 2011, but the original art from the Sketchbook will form part of the show, along with her drawings and watercolours of domestic and wild animals.

As on only child raised on a farm, Linda says she gravitated naturally to the companionship of the natural world. As an artist, she has frequently led sketching workshops in the fields and woods near her home, and she has further honed her keen observation of the nature as a frequent and hardy volunteer during the annual migratory bird banding and census at Long Point on Lake Erie.

Linda is currently president of the Upper Credit Field Naturalists. Along with her show, she will present a talk at the museum (where she has volunteered since 1995), called “Other Nations: A Life spent in the Company of Animals.” The title was inspired by author Henry Beston who observed that “animals are not brethren, they are not underlings, they are other nations.”

A summer with the animals

Along with the Beauty in the Beast exhibition, there will be special animal-related shows and presentations nearly every weekend from June through August. For event details and updates, see dufferinmuseum.ca.
(Regular museum admission applies, unless noted.)

June 16, 2pm : Veterinary Medicine through 1800 to WWI
A talk by veterinarian Michael Corridini.

June 23 & 24 : Celebrating Our Conservation Authorities
Trails and wildlife at the headwaters of four rivers.

July 7 : Love Your Pet Day
With local SPCAs and Procyon Wildlife, a local centre for animal rescue and rehabilitation.

July 8, 2pm : Other Nations: A Life Spent in the Company of Animals
A talk by wildlife artist Linda McLaren.

July 21, 2pm : Frogs of the Headwaters
A talk by In The Hills writer Don Scallen, with pictures and frog voice recordings.

July 28 & 29 : Celebrating Domestic Animals in Dufferin
The role of farm animals, race horses and their keepers in county history. Live animals and birds on site.

August 12, 2pm : The Queen, the Bear and the Bumblebee
Dini Petty reads from her children’s book.

Aug 18, 2pm : Moths and Butterflies
A talk by In The Hills writer Don Scallen, with live caterpillars.

Aug 26, 2pm : Beauty Inside the Beast
Biologist Esther Finnegan on how animals control their internal thermostat.

Signe Ball is publisher/editor of In The Hills.
Show 2 Comments

In addition to extraordinary works of art, Beauty in the Beast includes photos and documents that convey the integral role animals have played in both the domestic and work lives of the people of Dufferin County. The items include blacksmith ledgers, veterinary advertisements, and photos from the Orangeville Raceway.

Among them is an 1881 diary kept by Carver W. Simpson. As a young farmer in Amaranth, Simpson kept what was a mostly prosaic log of his daily activities, visits to town for supplies, weather reports, and the like. But prominent among the matters he considered noteworthy were his sightings of wildlife. These included both the creatures he admired (“I saw two loons fly over the barn this morning, very fine birds”), and those he dispatched (“Shot two crows for stealing two chicks”). The diary is punctuated by small and charming ink drawings of the birds or animals he’d noted.

The lifelong bachelor also made a hobby of taxidermy. His work included a passenger pigeon – and his stuffed example of the doomed species eventually wound up in the collection of the Royal Ontario Museum.