For people who live like this week-in and week-out, I can only imagine the stress involved in endlessly fretting over making it until the next hamper.

I suspect I have it easier than my Food Box Challenge colleagues. Each of them is doing this challenge on their own, while surrounded by families or house mates who are still happily noshing to their heart’s content. Well, maybe not entirely happily. I hope there’s some guilt involved.

Maybe I caught my wife Brandy at a weak moment, like just after her fifth computer-related ‘how-do-I’ question of the day for example, but she agreed to participate in the Food Box Challenge along with me. That means we got to double the food amounts and actually, it looks as though we’ll have some left over at the end of the week.

We didn’t double everything. There’s no way we could go through two bags of rice, two packages of pasta, or two containers of peanut butter, so we only got one of each. We also thought it would be cheating to double the specialty items from the pantry – margarine, vinegar and the like, so we’re keeping that to the five allotted for one person as well.

Where it really made a difference, though, was with the eight dollars of “your choice” items we were each allowed. The grocery bill for our two-person household is virtually always more than a hundred dollars a week. Yet with only sixteen dollars, we were able to get meat, some vegetables, even an 88 cent box of cookies. That would have been impossible with only eight dollars, because every cent would have been required for ‘must-haves’ like milk and bread.

Even with that double allotment, at the mid-point in the week our little pile of food is rapidly dwindling. More than half the bread and milk is gone, the canned goods are significantly diminished, a good chuck of the pasta is no more. Of course, for us there’s light at the end of the tunnel – two more days and it’s over. For people who live like this week-in and week-out, I can only imagine the stress involved in endlessly fretting over making it until the next hamper. For those with children, it must be absolutely gut-wrenching.

It’s not simply a question of having enough, either. What do you do when everything except the pasta is gone? Eat plain macaroni three times a day? Feed your child nothing but kidney beans? Good luck with that. I suspect there comes a point where people choose to go hungry, just because they can’t face another plate of the same bland meal they’ve been eating for days.

Then there are those who don’t even have that luxury. If you’re homeless or living in your car, you have no place to cook the food in the first place. If you don’t know how to cook, or have a disability, a bag of raw rice can easily be too big a hill to climb. 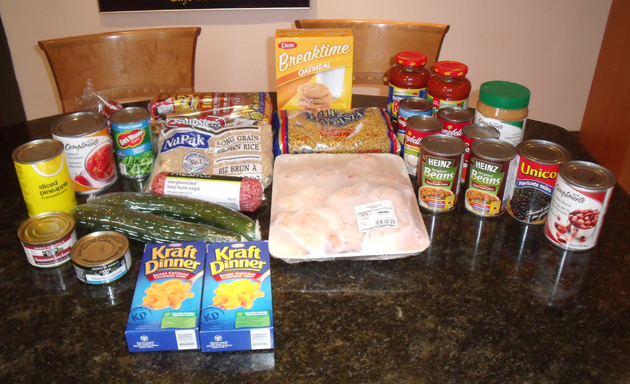 Our meagre groceries at the start of the week, seen here, are disappearing fast.

The Food Box Challenge is all about raising awareness. Caledon Community Services has set a target of 5,000 visits to the daily blog all participants are posting on the CCS Food Box Challenge website. Please take a moment and give it a look.