The men in your family remind me of a dog I once had. He was very good at letting you know what might happen.

True confessions from the ninth concession

My doctors have expressed the unanimous view that I must start exercising. I have pointed out that I perform a regular routine of elliptical weight training every day here on the farm. I climb up and down a ladder and toss bales of hay to the sheep. I wrestle pails of water over gates and clean out pens by hand with a manure fork. There’s even a little bit of martial arts involved because I have a Border Cheviot ram named Cato who attacks me whenever I have my back turned. This seems like a respectable workout to me.

Not so, says my friend Dr. John, a lean, hard-bodied man of science who runs a sports clinic in town and makes a nice living comforting boomers as their bodies go bad. “That’s not exercise. That’s just slugging,” he says. “You need something aerobic. Why don’t you do what I do and get on a bicycle?”

I pedalled my way around England and France in the summer of 1971, working on farms and picking fruit. It was a lark, but there was purpose behind the effort. I was always trying to get somewhere and do something. Even then, the roads were clogged with over-oxygenated cyclists with bulging calf muscles and legs shaved to reduce wind resistance. They would fly by in a whoosh of fluorescent Lycra, raising an eyebrow at the kid in jeans and workboots, labouring up the hill to the next pear orchard.

The Needles have no history of exercise and we live longer than Galapagos tortoises.  My dad is now 93 and he hasn’t broken into a trot since the Second World War. He has never needed hip replacement or knee surgery because all his joints are still in the box. He was an actor for nearly 70 years and people tell me the most frightening thing they ever saw on stage was my dad in a swordfight. He was legally blind without his glasses and Macbeth and Macduff would flatten themselves against a wall and cover their heads as he went by.

He is also a bit of a hypochondriac. We like to say that he never quite got over the Spanish flu in 1919. He has a tombstone picked out for himself that says, “I told you I was sick.” He believes that the path to good health can only be achieved through constant worry, and at this point it’s hard to argue with the results. He’s basically fine.

“You used to cycle,” says my wife.

“The railroads used to run good hotels,” I reply. “Cycling is actually pretty dangerous. I was knocked off the bike half a dozen times, once by another cyclist and another time by a dog.”

My wife sighs. “The men in your family remind me of a dog I once had. He was very good at letting you know what might happen.”

Her menfolk are cattlemen who fret about prices and the weather, but never about their health. If they can’t run something down, they ride it down and rope it. If they can’t rope it, they shoot it. I noticed that most of them turned up to our wedding on crutches, which should have been my first clue. One of them predicted darkly that I would be limping too before long and they were right. I fell out of the haymow about 15 years ago and crushed the heel of my left foot. It became arthritic, which deters me from walking, so now I go to Dr. John for cortisone shots every six months. This is what prompted the recent conversation about exercise. 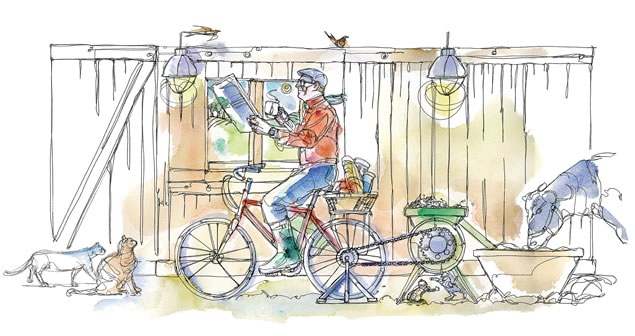 My doctors have expressed the unanimous view that I must start exercising. Illustration by Shelagh Armstrong.

But then again, who can argue with a chance to spend less time with the kids? I climb up into the haymow and bring down my ancient touring bike. It’s in remarkably good condition, probably because it hasn’t been used for 40 years. Then it occurs to me, I could bolt the thing into the barn floor and run a chain drive back to the pulley on my oat roller. Instead of risking life and limb out on the road, I could sit here with a cappuccino and a newspaper, grinding feed. That way I can feed the animals, feed my body with oxygen, and feed my brain with the illusion I am doing something useful.

So I’ll take Dr. John’s advice, but I won’t stray too far from the farm, where futility has always had a noble purpose.

Author and playwright Dan Needles is a recipient of the Leacock Medal for Humour and the Order of Canada. He lives on a small farm in Nottawa.
Show 1 Comment