A Cook’s Tour of Country Pubs

Where do you go when you’re hungry for good company and casual food? To your local pub of course.

The great diarist Samuel Pepys described his country’s numerous pubs as “the heart of England,” a tribute no doubt fuelled in part by his sometimes rueful love of liquor and good company, but also by a realization that the local pub is often the focal point of a community. Nowhere is this more true than in rural areas, where the pub is an ideal gathering place for residents isolated by wide open spaces. Even in this era of social networking, nothing can compare with real face time and the pleasure of getting out now and then for a pint and a bite to eat in the company of friends and family.

The best pubs (short for public house) are casual, friendly places where the food is unassuming and reasonably priced. Headwaters is blessed with several, all cultivating a casual ambiance that evokes a home away from home. 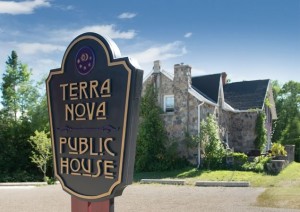 The newest of these is the fittingly named Terra Nova Public House, which opened in 2011 in the hamlet of Terra Nova. Situated at a crossroads in the heart of the Pine River Valley, the one-time general store has been extensively renovated to create a warmly intimate bar and dining area as well as an expansive outdoor patio. The location is particularly attractive to hikers coming off the nearby Bruce Trail. 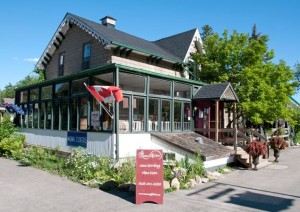 Another hikers’ mecca is the cleverly named Peter Cellar’s Pub at Mono Cliffs Inn in Mono Centre. Just across the road from the 750-hectare Mono Cliffs Provincial Park, the tiny basement pub has provided succour to walkers and locals since 1987 when the former general store reopened as an inn.

Proprietors Carol and the late Michael Hall hailed from Australia, so the pub has a definite Down Under atmosphere, particularly thanks to the extensive wine list. Chef Jason Reiner’s creative menu is a constantly changing exploration of local and exotic fare, everything from escargot to red deer chops and chocolate pâté. The bread pudding is legendary, the quiche divine. Publican Wayne Biegel’s warmth and enthusiasm keep people coming back for more and more. 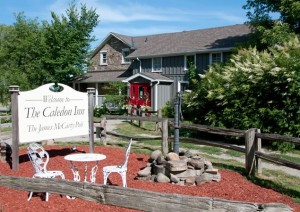 A local watering hole since the 1860s, the charming and historical Caledon Inn has been home to the James McCarty Pub since 1967. Named for the family who owned the land in the 1800s, the lower-level pub retains the old-world warmth it has always been known for. A former way station on the coach road linking Toronto and Owen Sound, the Caledon Inn appears in many international pub guides, and for good reason. The menu features such pub staples as burgers, chicken wings and fish and chips, plus novelty items for the more adventurous, including deep-fried pickles, poutine and souvlaki. There’s cold beer on tap and you can drop in and hear live music every Thursday.
Entrées range from $8 to $15.

The Pub at Terra Cotta Inn 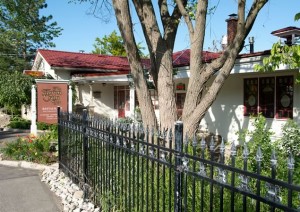 On the banks of the Credit River in the hamlet of Terra Cotta, countless couples have pledged their troth in the beautiful gardens of the eponymous inn. Perhaps they calmed their nerves before taking their vows with a cold drink in the Terra Cotta Inn Pub. The riverside property is known for its serenity, and the pub has been a favourite spot for locals and the many enthusiastic mountain bikers who come to the area to cycle the extensive network of nearby trails. The Inn, which has been operating since the early part of the last century, has survived fires and economic collapse. Today, the traditional pub menu features burgers, wings and fish and chips in a casual and welcoming atmosphere.
Entrées from $8 to $15.