Erin’s Dolores Smith shares her passion for the many wonders of extra virgin olive oil.

For Homer, olive oil was “liquid gold.” Athletes in ancient Greece would ritually slather their bodies in it. At one time, anyone caught cutting down an olive tree in Greece was condemned to death or exile. This symbol of abundance, glory and peace has been considered nutritional, medicinal and, at times, magical.

I didn’t mention olive oil’s exalted history when I invited some friends over for a tasting with Dolores Smith, an Erin-based olive oil expert, but they came nonetheless – for what turned out to be an engaging couple of hours. 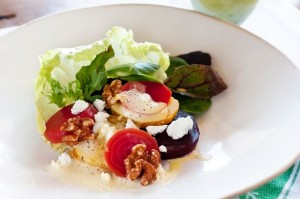 Olive Oil Sabayon Sauce. This is great as a dressing for green salad and warm beet salad, or as a sauce for seafood or beef. Photo by Pete Paterson.

Dolores’s fascination with olive oil dates back about ten years to when her older sister gave her a beautiful bottle of it. “It wasn’t the best olive oil, but it intrigued me,” she says. For the next four years, she dedicated all her spare time to learning about Homer’s gold, taking courses and attending tastings in Europe and the U.S.

When she started out with her company The Olivar Corp, her objectives were to import and distribute the best quality olive oils from Spain, the world’s largest producer, and educate people about its health benefits. She chose Spanish oil partly because the marketplace was saturated with Italian and Greek oils, and because she was born in Madrid.

To get our tasting underway, Dolores explained the term extra virgin: “Extra virgin oil has no taste defects. It doesn’t taste woody or metallic or mouldy.” Extra virgin means the oil is unrefined – extracted by pressing, with no flavour-destroying heat or chemicals used in the process. She urged us to taste the difference between “extra virgin” and “virgin” oils. “If a person tasted an ordinary virgin oil,” she said, “it would turn their stomach.”

The International Olive Council stipulates the fatty acid content of extra virgin oil must be less than 0.8 per cent, but the high quality oils she imports are nearer to 0.2 per cent. Extra virgin oils must also contain less than 20 units of peroxide (a measure of oxidation), and the temperature of the oil during processing must not exceed 27°C, hence the term “cold pressed.”

We sipped the oil straight from little cups. “It’s almost as if you don’t feel it in your mouth,” Neil, one of our tasters, piped in. But, as Suzanne, another in the group, suggested, “It leaves a peppery sensation in your throat.” Dolores recommended pouring some over blue cheese, and agreed with Bob that drizzling a bit to finish his homemade pizza would be delicious. At about $25 a 500 ml bottle, this silky oil was a group favourite, best consumed within six months of being pressed.

Next up was Full Moon, another delicate oil harvested during the full moon in October and sold in an arresting square bottle. That was followed by Oro San Carlos, a medium-strength oil that seemed buttery, creamier, more herbal and, surprisingly, less flavourful in comparison. “Higher acidity gives it its oily feel in your mouth. It also results in less flavour,” Dolores explained.

We enjoyed our way through four more offerings, including the organic Rincón de la Subbética, winner of more than 85 awards and honourable mentions since 2006, comparing notes on flavour and potential food pairings as we went. 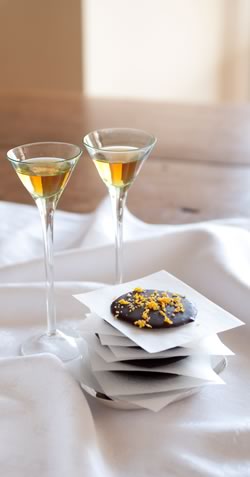 Each new taste was a revelation, confirming Dolores’ concern that most Canadian consumers lack the knowledge to understand the subtleties of this common ingredient, one that has such potential to enhance our culinary experience.

Like wine, olive oil gains a particular flavour from the producing region’s soil and climate – its “terroir.” Its taste also depends on the variety of olives, and how they’re gown and processed. Bruised, broken or diseased fruit increases the fatty acid content, as do insects. Fruit flies, the bane of producers, can easily turn an extra virgin oil into a virgin one. Peroxide levels climb when the oil oxidizes, as it might if processed carelessly or stored in a warm spot, especially in a clear bottle. Dolores recommended keeping olive oil cool and in the dark, though not in a refrigerator.

For our kitchens, Dolores recommended having three different extra virgin olive oils on hand – one delicate, one medium and one intense.

Dolores topped off the tasting by serving her exquisite homemade chocolates made with the Dauro oil. Meanwhile, she explained how olive oil can help reduce blood pressure and cholesterol levels and even contribute to weight loss. No wonder Homer was so enamoured.

This summer, Dolores is offering olive oil tastings in her backyard. You can wander through her grapevines while sipping some of the best olive oils Spain has to offer. Find her imported oils at Dave’s Butcher Shop in Orangeville, Howard the Butcher and Gourmandissimo in Caledon East, Simple in Primrose and The Naked Vine in Bolton. For information on tastings, links to health studies, and a full product list, see theolivarcorp.com.

From motor oil to extra virgin 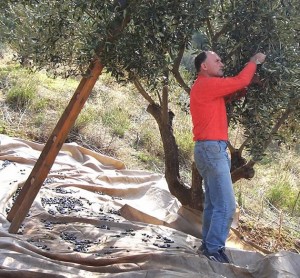 Since 2006, long-time Bolton resident Nick Tzaras has been producing high quality organic and conventional olive oil from olives grown on his family’s farm near Platana, southeast of Sparta in Greece. Nick, who used to run a service station at the corner of Highway 10 and King Road, now sells his olive oil under the name Spartan Rolling Hills at some 50 locations in Southern Ontario, including Garden Foods in Bolton. Indeed, Garden Foods’ store brand olive oil is also bottled by Nick.

Nick’s olive plantation has about 3,000 trees, mainly Manataki, Koutsourelia and Kakoni, and local folklore places some of them up to 2,000 years old. From these and more than 150,000 trees owned by family, friends and neighbours in the region, Nick produces his oil. Unfiltered and with a guaranteed acidity level of less than 0.8 per cent, his First Cold-Pressed Extra Virgin Regular Olive Oil and his Organic First Cold-Pressed Extra Virgin Olive Oil are premier products.

Each winter, Nick travels to Sparta to oversee the harvest. There he hires the pickers, watches over the pressing (which takes place within a day or two of harvesting), and makes sure the oil is not filtered, and no impurities spoil his beloved product. It is then shipped to Canada for bottling and packaging.

When he can, Nick helps with the harvest, all of which is done by hand, just as it was by his father and grandfather from whom he inherited his trees, his age-old harvesting techniques and his love for what they produce.

Pick up Spartan Rolling Hills olive oil from Garden Foods in Bolton, the Esso Service Centre on Hwy 50 north of Bolton, or the Apple Factory on Mississauga Rd at Hwy 7. www.spartanrollinghills.com 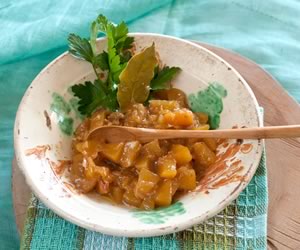 We substituted Ontario peaches for the usual mangoes in this spicy chutney.