Certain varieties of maize explode when heated, forming fluffy pieces that are delicious seasoned and eaten as a snack. 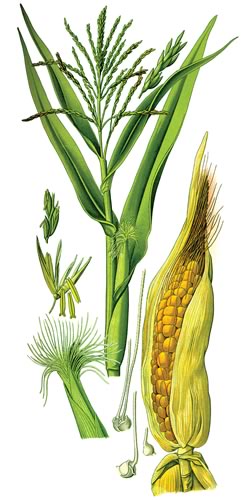 abundant
300 million tonnes of maize are grown annually in North and South America. In 2009, worldwide production was 817 million tonnes, more than rice or wheat.

origins
First cultivated in Mexico as early as 10,000 years ago, maize was likely introduced to Europe by Columbus, where it was soon recognized as a valuable food crop spreading to northern Africa, western China and the East Indies by 1575.

uses
Maize (aka corn in the Americas) has as many as 500 uses. In addition to being a staple food for humans, and livestock, corn is used as packing material, fuel, ornamental accents, and in the production of everything from adhesives to paint and insecticides.

modified
Maize is one of nine genetically modified crops grown commercially. Approximately 85 per cent of the North American crop is GM.

ethanol
40 per cent of North America’s maize crop is used to make corn ethanol, a biofuel thought to have a lower carbon footprint than conventional fuels. Now, however, evidence shows increased ethanol production has raised the price of corn, a food staple in many poor countries.

sweet
Sweet corn is eaten as a vegetable. It contains more sugar and less starch than field corn, which is intended for livestock, and comes in three categories (white, yellow and bi-colour) and dozens of varieties with such whimsical names as Bodacious, Cloud Nine and the ever popular Peaches and Cream.

nutrition
Sweet corn is low in saturated fat and sodium and contains no cholesterol. It is high in dietary fibre, magnesium, phosphorus, thiamin and vitamin C. The folic acid in corn is important in preventing neural tube birth defects.

harvesting
Sweet corn is harvested at the “milk” stage before starch has formed, usually midsummer to early fall. Field corn is left in the field until very late in the fall or even winter to thoroughly dry the grain.

porridge, etc.
Cornmeal (ground dried maize) is the basis of polenta in Italy, hominy grits in the southern U.S., mealiepap in South Africa and angu in Brazil. It is used as a replacement for wheat flour in cornbread and Mexican tortillas.

popcorn, etc.
Certain varieties of maize explode when heated, forming fluffy pieces that are delicious seasoned and eaten as a snack. Roasted kernels are popular as snacks in Vietnam and Peru. Corn flakes are commonly eaten as a breakfast cereal in many countries.