Hockley Valley Coffee Roasters: In pursuit of the perfect cup

Tom Deans loves coffee so much, he decided to roast it himself!

Within minutes, I understand why not taking over his father’s plastics business in Orangeville was a good idea for Tom Deans. This smartly dressed, clean-cut man who looks ten years younger than the half-century birthday he just celebrated clearly loves what he does. We were meeting to discuss Hockley Valley Coffee Roasters – as we sipped a cup of brew in an Orangeville coffee house – but we began with a conversation about his book Every Family’s Business.

Deans has sold over 225,000 copies in over 50 countries of this slim, self-published narrative that borrows heavily from The Wealthy Barber.  It boldly advocates that a family business should be sold, not gifted, to the owner’s children, or sold to someone else altogether if the kids aren’t interested.

“I had an extraordinary experience because my father relieved me of the obligation to continue operating a company that I didn’t want to own,” says Deans. So rather than passing the Orangeville-based business (now Röchling Engineering Plastics) along to his son, his father sold it in 2007, and Deans had the freedom to pursue his own passions. A book welled up inside the businessman as a result of the succession planning process he and his dad had used to come to the sale decision. The resulting compact 140-page volume has made Deans a sought-after speaker who charges $8,000 or more to make an appearance.

All of which made me ask: What does this have to do with Hockley Valley Coffee Roasters? 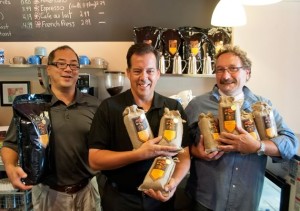 The coffee idea began to percolate when Deans was speaking to a group of small business operators in Guatemala, a number of whom were coffee farmers. “I really connected with these people,” he says. Proud of his six-cup-a-day habit and constantly in pursuit of the perfect cup, Deans explained, “It was serendipitous. I had access to great coffee and I have a friend who is a chef and was trained in Cuba to roast coffee.”

His four-year-old venture is no run-of-the-mill enterprise. “My first cup of coffee of the day is very important to me,” says Deans. “I want it to be the exclamation point of the day. That’s how we operate.” Using an “old-school cast-iron drum roaster,” his roast master Wallace Mark uses the best beans he can find. “Mark is like Indiana Jones tromping through the jungle looking for that perfect bean. He roasts in silence so he can hear the beans cracking. He needs to hear a second crack for an extra dark roast.”

Among the almost 40 stores, cafés and restaurants in Headwaters that sell his coffee, the best-selling product is Guatemalan Dark Roast. The whole beans (he only sells whole bean coffee) are dark, oily, aromatic and, in comparison to the lighter-coloured, drier-appearing medium roast, contain far less caffeine. Yes, that’s right, the dark roast has less caffeine. The longer you roast coffee, the more roasted flavour it has and the more its natural caffeine is released. “The highest caffeine coffee,” Deans explains, “is cheap, flavoured coffee that is generally made from poor-quality beans.”

Deans is fanatical about coffee preparation. Favouring a dark roast, he advocates grinding coffee with a “burr” grinder and brewing it in a French press. “With a French press,” he says, “you can release flavours in a more controlled way.” The burr grinder produces an irregular ground that gives the coffee a “fuller, more authentic flavour.” His excellent website gives detailed instructions on how to make the perfect cup of French-pressed brew.

Deans likens his coffee business to wine. “We are trying to create a nomenclature for coffee.” It’s a language of interest to his target market of foodies and wine lovers. “We are not focussed on the Tim Hortons crowd.” Consistent with this business strategy is his packaging. The distinct, reusable burlap bags, which also come from Guatemala, and his detailed label give his product a sophisticated yet traditional feel. “The package sells the first pound,” he says. “The beans sell the rest.”

Nicky French at Harmony Whole Food in Orangeville concurs. Her customers “love the burlap bag and the fact that they are reusable.” Some people keep them for their own use, but they can also be returned to Harmony to be sent back to Deans. French says Harmony’s customers also rave about what’s inside the bag. Having now finished my first bag of beans, I’m also a convert.

Deans also has a philanthropic angle to his product, which is all fair trade, organic, bird friendly and, with the exception of the decaf (which goes through the Swiss water process), farmgate-direct. Twenty-five cents from the sale of every pound of Hockley Valley Coffee Roasters’ coffee goes back to the communities that grow the beans. “It primarily pays for clean water,” he says.

In a competitive marketplace, Deans says his business is profitable and sustainable because he understands his customers, and once converted they stay with his brand. It is also because of the attention that goes into his product. “If you have a great bean, you can still mangle the roast,” he says, “and a fabulous roaster cannot make a bad bean great.”

I ask him if his kids (Jordan who is at university and Nathan who is finishing Grade 12) will take over the business someday. “They’ll be offered it, but there will be no discount on the market value. Ultimately, I’ll give them something far more valuable. I’ll give them all my wealth, in the broadest sense of the word, to pursue their passions.”