Ladies’ night out … with shotguns

I cracked the gun open and the empty shot popped out of the barrel in a small cloud of smoke.

As a young girl at summer camp, I had a walk-on part in the musical Annie Get Your Gun. Ever since, gun-slinging gals have fascinated me. However, my interest never translated into actually learning how to shoot a gun – at least not until a warm evening last April.

I turned up for the weekly Ladies’ Trap Shooting Night at the Dufferin Northern Peel Anglers’ and Hunters’ Association just off the Blind Line, north of Orangeville. Dale Krushel, who heads up trap shooting, explained the club’s 300 predominantly male members have access to trap shooting, archery and an indoor shooting range.

Dale gave me a tour of the pair of trap shooting fields. One is for straight trap and doubles, the other for “wobble,” in which the “bird” (a clay disc) leaves the “house” at an angle up to 30 degrees from ground level and splays in a 42-degree arc. The wobble better represents what you might encounter if you flush a pheasant or duck in the wild. It sounds more difficult than straight trap shooting, but some people find it easier, perhaps more natural, says Dale.

To shoot traps, up to five people stand at individual stations about 15 metres back from the house, which is where the birds are released. Shooters take turns until each has had five shots from a station. Then everyone moves one place to the right and takes five more shots, and on it goes until all have shot a full “round” of 25 shots, five from each of five positions.

I asked what a good score is and the predictable response was “25.” In reality, any score in the 20s is considered good. Then I asked Dale what he figured I’d score that night and, diplomatically, he said, “Some of the women struggle and get seven to twelve when they start.”

He took me to the wobble field, pushed a button on a handheld device, and a fluorescent orange disc (a bird) went flying from the house, imploding upon contact with the grassy knoll about 30 metres away. “The birds are made of clay and decompose quite quickly,” he told me.

Before I was allowed to shoot I got the lowdown on firearm safety from Bob Clarence, a long-time club member who has had his instructor’s licence for 43 years and once shot four consecutive perfect scores of 25. Dale then gave me eye and ear protection, and had me carry my shotgun out to the range where we watched the ladies for a round.

Laurie Orr from Mono handled her gun with great confidence, and for good reason. She scored 23 out of 25 on her first round for the evening, one short of her personal best. Laurie took up shooting after she and her dogs ran into a small pack of coyotes while out walking. She got her licence and was soon shooting at the range. “Knowing how to handle a gun was a confidence builder,” the 4-foot-10-inch sharpshooter told me.

Next, Dale had me tuck the stock of the gun into the hollow formed between my armpit and shoulder. “If you don’t do this properly, your shoulder will be black and blue tomorrow,” he said. (My shoulder was black and blue the next day.) Then he had me lean forward from the waist and place my cheek against the gunstock. “Don’t be afraid of the gun. Lean into it.” Dale then released a bird and had me track it with the sights of my unloaded gun.

We loaded a live shot. I shouldered the firearm, leaned into it, placed my finger on the trigger and lined up the front of the house in the sights. “Call ‘pull’ when you are ready.”

“Pull,” I called hesitantly. Tracking the orange disc, I pulled the trigger and next thing I knew the disc hit the grass fully intact. No beginner’s luck for me.

I cracked the gun open and the empty shot popped out of the barrel in a small cloud of smoke. This actually made me feel a bit like Annie Oakley. I placed a new shot in the barrel, cocked the gun closed and raised it to my shoulder. Dale reminded me, “Once you’ve lined it up, don’t move your head from the stock.”

This time, I shot too far to the right.

To my surprise, the bird burst into pieces in the air. In disbelief, I asked Dale, “Did I hit it?” My next shot nicked the bird, causing it to veer off course. 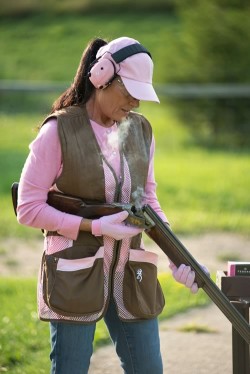 The shotgun cartridges I was using were filled with tiny pellets called birdshot. They explode releasing the shot in an expanding pattern that spreads to a metre in diameter by the time it’s travelled 30-plus metres. (A rifle differs in that the inside of the barrel is “rifled,” meaning it has a spiral groove in it that keeps the bullet in a straight line.) A 20-gauge shotgun like I fired is commonly used for hunting birds, rabbits and other small game.

My luck didn’t hold out for a third straight hit, but as I continued to shoot, I started to get the feel of it. I realized how important it was to keep my upper body “locked.” When I hit a bird, I was usually aware that my form was good. I ended up hitting 10 of 25, falling in the middle of what Dale had predicted. Seems I’m no Annie Oakley.

I’m no Pearl Willems either. Clad in a pink ball cap, matching pink ear protection, pink jersey and a very stylish pink and brown shooting vest, and with a personal best of 22 out of 25 so far, Pearl looks every bit the modern-day Annie sans buckskin. Pearl, along with the other women who come out on ladies’ night, is making her mark at the club. Even old-timer Bob Clarence has felt the effect. He’s been bringing his young grandson to shoot at the range for a while. “But,” he told me, “I just ordered a pink shotgun for my two-year-old granddaughter.”