A Reliable Source of Suspect Information

For the longest time I had the gnawing feeling that something was happening somewhere and I didn’t know about it.

Years ago, when I lived in the city and worked for a big life insurance company, I belonged to a lunch group. There was a management dining room on the ground floor of the office tower where I worked. It had no formal seating arrangement; you just found a chair at one of the ten tables and joined the conversation. Sitting at that table, I learned more about what was happening in the company and around the city’s financial district than I ever gleaned from the company newsletter or a newspaper. I found out who was up and who was down, what was in and what was out. Over the years I absorbed the thousand little prompts and cues on haberdashery and business etiquette that a young man on the corporate ladder must learn to make his way in the world.

After eight years in the company, I suddenly got married, jumped off the ladder and bolted for the countryside to pursue an entirely new career as a writer. There were a lot of changes that year, but I found the biggest shock to my system came from leaving the comfort and gossip of that company dining room table. For the longest time I had the gnawing feeling that something was happening somewhere and I didn’t know about it.

Then I found Rhonda’s diner in the village. This was a ramshackle collection of buildings that had been dragged to the site at various points over several decades to form Andy Kennedy’s Garage in 1939, then Andy’s Lunch, then McKenzie’s Restaurant in 1968. By the time I showed up in 1988, it had morphed yet again into Rhonda’s Village Restaurant.

Rhonda’s was the clearinghouse for all matters of worldly and unworldly significance: deaths, fires, lost dogs, traffic accidents, recent couplings and de-couplings. You could find a roofer, borrow a wood splitter, discreetly check a credit rating, trace a family tree or get some helpful advice about a birthday present. Every day bulletins were issued on the progress of crops, weather and the price of pinto beans.

Rhonda’s diner operated on the same principle as the company diner. You didn’t look for a table – you just found a chair. The food was the normal artery-clogging fare of rural Ontario. The décor defied classification. There were a lot of fish on the walls, because the diner overlooked a bend of the Pretty River and served as the official headquarters for the opening of the season every April. A group of patrons formed their own service club called the Village Idiots and even printed up T-shirts. They submitted April Fool pranks to the newspaper every year and were constantly tinkering with the front door that never shut properly. Photos of their exploits joined the fish on the walls. 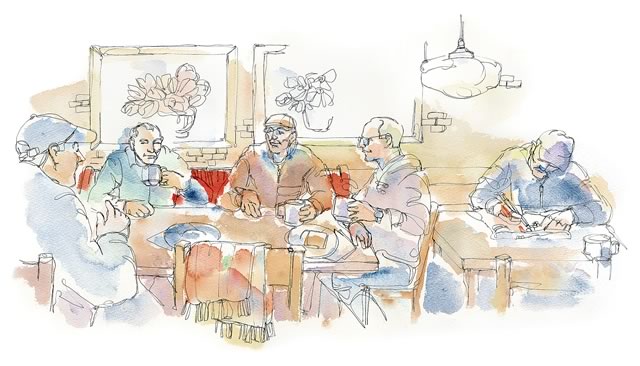 Rhonda’s was the clearinghouse for all matters of worldly and unworldly significance: deaths, fires, lost dogs, traffic accidents, recent couplings and de-couplings. Illustration by Shelagh Armstrong.

Four years ago, after slinging hash for more than twenty years, Rhonda and Dave suddenly retired. Surprisingly, no one rushed forward to volunteer for the privilege of getting up at five every morning to serve a $5 breakfast to a bunch of old guys with sharply held opinions. And so the little building was shuttered and the Village Idiots were turned out to free-range. It wasn’t long before I was struck by that familiar gnawing feeling that stuff was happening somewhere that I didn’t know about. Only this time, I had a lot of company. We all fanned out over the side roads and were absorbed into other coffee klatches. Some went to the G-5 down in Gramma Giffen’s diner in the Glen. Others joined Bruce Burgess’s Internal Combustion Club until Bruce’s passing last year. That group has now moved on to the Table of Truth in Alvin Currie’s Drive Shed.

For my part, I am still a regular in the Monday Lunch Club That Meets on Wednesdays. This is a group of men who have given up jobs in the city and settled in the country. We have no fixed address. Each week we move someplace different, trying to accommodate the sharply held prejudices of our membership. We don’t fish or hunt or restore old tractors. We just visit.

Miners insist that gold is where you find it. The same rule holds true for coffee clubs. A million man-hours disappear inside their walls every week, but this is where you will find the beating heart of a neighbourhood.