I’ve been consciously writing about a world in decline all my life. I feel as a writer I have been charged with the safekeeping of all these examples of farmer thinking. 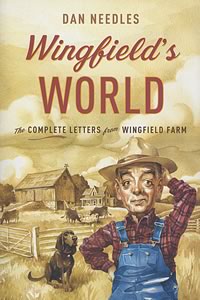 There’s no doubt Stephen Leacock has left an imprint on the creator of Walt Wingfield and the world of Persephone Township. Dan Needles was raised on Stephen Leacock. He’s read everything by him, even his history of Canada. “His economics were still around when I went to school in the late ’60s.”

Humour, like many things, is a matter of taste and changes over time, says Needles. “If you have a taste for wit, then Leacock is alive and is an influence.” Needles, who grew up in Mono and now farms a little farther north in Clearview, still gets a chuckle out of one of Leacock’s characters – a damsel beloved by all the beasts of the field who is followed by “every damn dog in the township.” She could have popped out of any of the seven plays in the Wingfield cycle.

Needles’ connection with Leacock was solidified in 2003 when he was awarded the Stephen Leacock Memorial Medal for Humour for With Axe and Flask: The History of Persephone Township from Pre-Cambrian Times to the Present.

Days before Joe Matheson’s Sketching Sunshine opens at Theatre Orangeville in February, Needles will take the stage with two other Leacock Medal winners when the theatre and BookLore host a panel discussion on Leacock’s legacy. Joining him will be Terry Fallis who won in 2008 for The Best Laid Plans and Trevor Cole who won in 2011 for Practical Jean. The three authors will read from  their books and discuss the challenging craft of writing humour.

Leacock said humour should bite like a lamb, not a dog, that it should cut, not wound. And it’s important to Needles that his own wit never veers into meanness in any of his plays. “What goes around comes around. Leacock knew that. He was shocked by the initial response of the community to Sunshine Sketches of a Little Town and only wrote about Mariposa once.”

Like Leacock, he is sensitive to his former neighbours in Mono (Persephone) Township  where he spent his childhood, as well as those in Shelburne (Larkspur) where as a young man he  was editor of The Free Press and Economist and first developed the Wingfield persona.

“I write about people who could be my neighbours. They are not in the public domain. They deserve to be treated with affection. There is a balance you have to strike telling the truth with affection. The truth on its own is too rough, and if it’s just affection, it’s too treacly.”

Leacock loved the Mariposa he wrote about in 1912 and over his life he watched the effects unbridled capitalism had on small-town Canada, says Needles. “By the time he died [in 1944], the Mariposa he knew was gone. I’ve been consciously writing about a world in decline all my life. I feel as a writer I have been charged with the safekeeping of all these examples of farmer thinking. It would be my personal responsibility if a single one were lost.”

Needles’ latest play, The Team on the Hill, runs from May 9 to 26, 2012 at Theatre Orangeville. In a departure from the Wingfield plays, it gives “farmer thinking” a more serious treatment. The story unfolds over a critical weekend as three generations of the Ransier family struggle to find a way forward for themselves and the family farm.

Needles says he feels a lot like Austin Ransier, the grandfather in the play. The older he gets, the more he has to explain himself. Needles, like Ransier, is the voice on the verandah. He still has a great sense of humour, but he also has important things to say. Much like Stephen Leacock.

Leacock – A Legacy of Laughter: An Afternoon with Three Leacock Winners, featuring authors Dan Needles, Terry Fallis and Trevor Cole, will be presented  by Theatre Orangeville and BookLore, and moderated by Bernadette Hardaker on February 10 at 1:30pm, followed by a reception and book signing. $20.

Sketching Sunshine – An Evening (and Morning) with Stephen Leacock,  written and performed by Joe Matheson, runs from February 21 to March 10, 2012.

All three events take place at the Theatre Orangeville. For details, see theatre orangeville.ca, or call the box office at 519-942-3423. Tickets for the authors’ event are also available from BookLore, 121 First St, Orangeville. 519-942-3830

WIT and WISDOM of Walt Wingfield and Friends:

Walt Wingfield on his neighbours:

“By now, I’m getting used to the fact that I don’t get a lot of the jokes they tell up here.”

His neighbours on Walt Wingfield:

“It was a pretty good year for the rest of us. But up there on lot 26, Walt had his own little depression.”

Freddy: “Walter, people run for council when they’ve run out of stupid things to do at their own place … and you got a long way to go there yet.”

The Squire: “There was one fellow lost in the last elec­tion because his wife’s grandmother was born south of Highway 2.”

“You go down the Town Line until you get to the old brick church…the one that burned down last summer…only you don’t turn there. You  keep right on goin’, and when you get to the bridge at the fifth side­road, well, it’s about a half a mile before that. So, when you reach the bridge you’ve gone too far.”

On fanners and farming:

“They’re the only people I know who can lose money thirty years in a row and then move into a big house in town for their retirement.”

“If you’re going to buy a farm, get one that hasn’t had a glacier on it yet.”

“We’re the only businessmen who buy retail and sell wholesale.”

“Running a farm is like standing out in the middle of a field in a cold wind, throwing up twenty-dollar bills.”

“What does a century farm sign mean? A hundred years without a single decent offer on your land.”

“Nothing is said about the darker side of life … although we look hopefully every week in the police report.”