Last spring, a friend who teaches yoga encouraged me to attend one of her husband’s Qigong classes. Intrigued by what she described as being “sort of like Tai Chi, but different,” I took part in an hour-long session. I liked the flowing movements and the way they made me aware of my body. It wasn’t as strenuous as the power yoga I practise, but I came away with a similar feeling of overall well-being – as if I’d done something healthy.

So when Janet Hern, owner of Fityou fitness studio in Erin, told me about John Paterson and his Qigong classes, I took note. A day later, an acquaintance became excited when I mentioned him – she’d been searching for a local instructor. With that, I decided it was time to investigate Qigong (pronounced chee-gong) more closely.

Paterson recommended a book called The Root of Chinese Qigong by Dr. Yang, Jwing-Ming. It defined Qigong as “any training or study dealing with chi which takes a long time and a lot of effort.” Hmm, not particularly helpful. I read on. The exact nature of chi (or qi) has long been debated by Chinese philosophers, and this book loosely defined it as “the energy or natural force which fills the universe.” In essence, the ancient practice of Qigong uses physical and mental exercises to improve health by improving the flow of energy through the body.

This made me wonder if I was correct to be writing about Qigong in a sports column. Was it an athletic endeavour or a medical treatment?

Paterson shed some light on my quandary. Like so many North Americans he’d been an active athlete when he was younger. “I did a lot of hardcore stuff and it aged me,” he explained. He ran marathons, made a living pulling rickshaws for years, and generally engaged in sport as a way to burn excess energy. For Paterson, like so many other Westerners, this all added up to a lot of “yang” in his life, and not enough “yin.”

Yang exercise tends to be highly competitive, whether it’s a marathon, a tennis match, power yoga, or many of our jobs. Yin exercise is contemplative and might involve walking, having a massage, gentle forms of yoga or even sleeping. Paterson says the goal is to find a balance, and that yang-style athletic performance can be improved by nurturing yin. 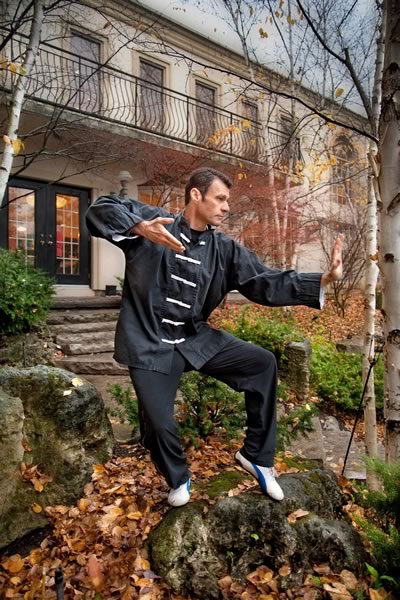 John Paterson strikes a pose during a Qigong demonstration at October’s Weekend in the Woods at Hockley Valley Resort. Photo by Rosemary Hasner.

As a student of Tibetan Buddhism, Paterson was drawn to the martial arts. Eventually, he entered the Mississauga studio of Robert Richer, a Kung Fu expert and Essene monk. “When I arrived there the energy was incredible,” he recalled. That was 11 years ago. Since then Paterson has studied with four more instructors, adding Qigong to his Kung Fu training, learning as much as he could, and developing a particular aptitude for chi projection. Surpassing even his instructors in this regard, he can extinguish a candle from four feet away.

Although he didn’t demonstrate that skill to me, he did demonstrate several exercises I could try. “Where chi does not flow, blood does not flow, and these areas get stagnant.” He likened it to a pond in which water doesn’t circulate.

Qigong involves repeating exercises – some very simple and others much more rigourous – meant to get chi flowing. Specific exercises affect different areas of the body, allowing a practitioner to focus on particular problems and self-heal. Paterson explained that Qigong both prevents and treats ailments. Although they share similar roots, Paterson said Tai Chi focuses on external, yang-style exercise related to muscles, while Qigong is an internal, yin-style exercise more related to organs.

When Paterson met Erin resident Mary Joan Smith, she presented him with an unusual challenge. She had been living in constant pain as a result of a motorcycle accident when she was 16 and was receiving 15 injections twice a week at a pain clinic in Brampton. She was on seven medications for pain and depression and had survived 19 surgeries.

“The energy in my body didn’t flow quite properly because I’m missing part or all of five organs,” Smith told me. “Three years ago I made the decision to give up Western medicine, which took a lot of courage.” When Paterson started treating her, the energy moved up her left leg “like a shot of morphine,” she recalled.

Smith knows she’ll never be without health problems, and was quick to say her personal choice may not be for everyone, but she is now managing her pain without any medications and feels a new sense of mental clarity, even her eyesight has improved significantly. “Qigong gave me the serenity in my mind to put everything that I learned into play. It was the greatest gift I ever received.”

My commitment to Paterson is to pursue diligently a few of the daily exercises he showed me. I am definitely open to experimenting with this gentle approach to improving my athletic skills, and possibly healing an old injury. In the meantime, I have quickly discovered Qigong’s calm and steadying effect, which is a fine way to start and/or end an otherwise hectic day.

Other group and individual sessions can be arranged. Contact John at [email protected].