Going the Distance – On Horseback

Endurance riding is one of the fastest growing equine sports in the world.

I often long to walk down to the barn, saddle up and head out to the hills on horseback. But I don’t own a horse, nor do I have a barn – and years can pass between my riding expeditions. So, helmet in hand, I was both excited and a tad nervous when I entered Teresa Finnerty’s barn near Palgrave and took in the familiar musty smells. Bella, an energetic German shepherd, announced my arrival. As she did a pair of shiny grey goats checked me out, and three kittens skittered up the stairs to the loft.

Down an aisle cluttered with a wheelbarrow, buckets and a rich assortment of halters, saddle blankets and other tack, Teresa was grooming Thistle, officially known as Just Unexpected. She is a competitive endurance rider, and her hopes are pinned on the 10-year-old dapple grey.

Most endurance horses are Arabs, but Thistle is half Arab and half Clydesdale, a breed best known for its ability to pull a plough – and the reason this horse is fondly nicknamed the Plough Beast. Thistle’s lineage makes him something of an anomaly in one of the fastest growing equine sports in the world, but he seems to have what it takes to cover the distance of 100 miles (160 km) in less than 10 hours. That’s the minimum requirement if Teresa is to land a spot on the Canadian team at the 2014 World Equestrian Games in France.

Standing in the cross ties was my mount, 20-year-old Curly, who nuzzled my pocket as I scratched his chin. “He’s retired from endurance riding,” Teresa explained, “but he still likes to get out for a hack.” 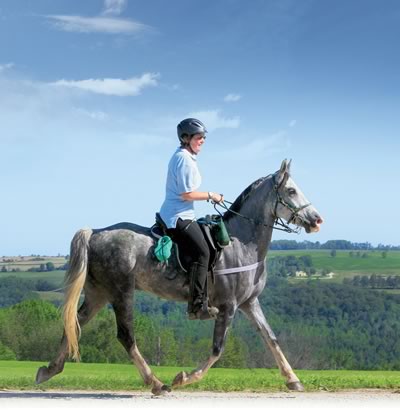 Teresa Finnerty and Thistle competed together for the first time three years ago at the Canadian endurance-riding championships. The team is now aiming to win a spot on the Canadian team at the 2014 World Equestrian Games in France. Photo Wendy Webb Photography.

We led the horses outside, mounted up and walked past the brick farmhouse that has been in the Finnerty family for generations. As we travelled deep into a hardwood forest, the trees dampened the roar of traffic along Highway 9. I settled into my saddle, gave Curly an appreciative pat and immediately felt like a kid again. Thistle broke into a lively trot, and Curly responded when I closed my legs around his belly. Fortunately, riding a horse is like riding a bicycle – you never forget how.

As we cantered up a track, Teresa explained that most endurance competitors stick to a brisk trot, but she prefers Thistle’s rocking-horse canter. I found it hard to imagine trotting for ten hours; cantering was beyond my comprehension. But do the math: covering 100 miles in ten hours calls for an average speed of ten miles an hour, and winners generally complete the distance in eight hours or less. The famous Pony Express riders of the American West travelled at the upper end of this pace, but they changed horses eight to ten times in 100 miles.

Walking again, Thistle settled into a stride worthy of an African cat. Teresa explained this ability to relax quickly is what makes him exceptional. The winner of an endurance event must be the fastest horse on the course and demonstrate a required level of fitness at checkpoints along the way. Arabs are famous for their combination of speed, physical strength and ability to recover quickly. “I’m bucking the system with Thistle,” said Teresa.

One in three international equestrian events is an endurance ride, and every year the Headwaters region hosts three distance-riding competitions at the Dufferin County Forest’s Main Tract near Mansfield. Two of these competitions include sanctioned endurance events.

Sue Downing of the Ontario Competitive Trail Riding Association manages all three competitions and along with OCTRA volunteers helps maintain the forest’s system of permanent trails in co-operation with forest manager Caroline Mach. In 2012 the three weekends attracted more than 200 competitors.

Both disciplines are well suited to those who start later in life – if Teresa makes it to the Worlds, for example, she will be in her mid-50s. It isn’t necessary to mortgage your house to buy a suitable horse, and training is fun. Who wouldn’t enjoy riding along forested trails?

And it’s the fun, not the competition, that draws Jessica Davis to competitive trail riding. Jessica and her grey thoroughbred, Distinctly Western – aka Earl – are a common sight around Caledon East, and the two have completed many competitive trail rides, both locally and farther afield. The longest distance Jessica has ridden is about 50 miles (80 km), which she said was tough. “You can’t believe how tired I was at the end.”

“I love getting out into the forest,” she said. “I just want to cover the distance. It doesn’t matter whether I’m first or last.” Besides, she added, the sport is competitive, but not cutthroat. “If your saddle breaks during a competition, people will stop and help you.” For Jessica, the distance rider’s mantra sums up the sport’s appeal: To finish is to win!