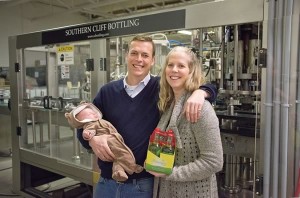 Nick and Lindsay Sutcliffe with daughter Madeline at 3 weeks; their cider is made exclusively from fresh Ontario apples at the Southern Cliff bottling plant. Photo by Pete Paterson.

Johnny Appleseed, the eccentric do-gooder of American lore, may be famous for introducing apple trees to the wild frontier, but early settlers valued the tart fruit of these trees more for making hard cider than for eating. Indeed, the idea of eating an apple a day to keep the doctor away didn’t take hold until the early 20th century, when the growing temperance movement prompted market-savvy apple growers to rebrand their product.

A hundred years later, Nick and Lindsay Sutcliffe are riding a wave that has seen a resurgence in the popularity of hard cider. It isn’t that the Sutcliffes don’t like to bite into a juicy apple, they just prefer to consume Malus domestica in its liquid form.

Born in Yorkshire in 1970, Nick came to Canada when he was 13, but he had been drinking cider for years before that. “I had my first cider when I was four,” says the gregarious and knowledgeable owner of Pommies Dry Cider in Bolton. His wife Lindsay, who grew up in Caledon, is also a fan of the elixir made from fruit well suited to Ontario’s cool, sunny climate.

Nick and Lindsay picked an auspicious time to launch Pommies, their dry, crisp hard cider with an alcohol content of five per cent. Cider sales in Canada have risen for eight consecutive years, making the beverage one of the fastest-growing alcoholic drinks on the Canadian market, according to a 2012 report by Euromonitor International. Every year, Canadians consume some 23 million litres of cider. This is a long way from the 840 million litres sold in Britain in 2010, but it isn’t bad for a country with little history of consuming a beverage that dates back to Romans times and beyond.

Making cider had been a lifelong dream for Nick, but he hadn’t done much about it until Lindsay challenged him one day in 2009. Exasperated, she said, “Stop talking and do something.” So Nick climbed into his car and drove to Prince Edward County. Unannounced, he pulled up at the County Cider Company and strolled inside. Before he left he had become fast friends with the owners, who helped him work out a recipe.

Nick and Lindsay’s cider had to be crisp, clear and dry. It had to be made exclusively from Ontario apples – no apple juice concentrate – and apple had to be the dominant taste. It’s the way the two of them like their cider, and they believed their preference would also appeal to women in their 20s and 30s.

“After university spent drinking ‘alcopop’ (sweet, mostly vodka-based coolers), we thought young women would flock to Pommies,” Lindsay explains. She was right. But she and Nick were surprised to find Pommies is also very popular among the mothers of these 20- to 30-year-olds. An estimated 65 per cent of Pommies’ customers are women.

“Our fan base is very faithful – and growing,” adds Lindsay, a communications expert. Even in colder weather customers love Pommies’ combination of five local apple varieties, a bit of sugar, water, naturally occurring acids and carbonation.

The apples destined for Pommies are pressed at Caledon’s Spirit Tree Estate Cidery, then fermented and bottled at Southern Cliff Brands, the couple’s Bolton bottling plant, which also bottles cider for Spirit Tree.

Pommies is available at more than 120 Liquor Control Board of Ontario locations. “The LCBO has been very helpful,” says Nick. When he approached the LCBO, the crown corporation immediately added Pommies to the selection at the 100 stores where cider is a top seller.

Through Nick and Lindsay’s efforts, along with several Toronto locations, Pommies is also available at local liquor stores. “Its sales are fantastic for a beginner,” says Sam Meli, manager of the Bolton LCBO. “We push local products. Local means a lot.” And a clerk who answered the phone at the Erin LCBO said she doesn’t usually like cider because it’s too sweet, but she likes Pommies because it’s “a nice dry cider.”

Pommies’ packaging complements the effort Nick and Lindsay have put into getting the taste just right. It is sold in an eye-catching four-pack, and the clear 355 ml bottles have the rounded shoulders of miniature wine bottles. “Cider is made like wine, but drunk like beer,” says Nick, who prefers to quaff Pommies straight from the bottle, though one of the trends in cider drinking is to serve it on the rocks.

If all goes according to the Sutcliffes’ five-year plan, their bottling facility will soon be working at full capacity, producing some 1.2 million litres of Pommies a year. Though Pommies is currently available only in Ontario, Nick and Lindsay hope to expand distribution across North America. They also hope to build a destination cidery that will help cider become to Caledon what wine is to the Niagara region.

“Apples are a much better crop than grapes for Ontario,” Nick says, his eyes sparkling. “Cider is the perfect product.”