From Headwaters to Ulster

Off the beaten path, a quick list of some lesser-known must see, do, and stay tips.

The Gathering Ireland 2013 beckons home Irish descendants around the globe this year.  For certain, there are quite a few of us with Irish lineage in the hills of Headwaters. And as my spring 2013 In The Hills story reveals, it’s a worthy pilgrimage that in the end deepened my connections to Irish roots here in Caledon.  For those tempted to explore their Ulster heritage, here’s my quick list of some lesser-known must see, do, and stay tips.

1.         Stay at Temple House, Sligo:  This pastoral 1,000-acre estate overlooks a 13th century lakeside castle established by the Knights of Templar.  Technically a hair outside of Ulster, this gracious 19th century mansion sits at the southwest border of County Donegal, near the town of Sligo, Sligo County — the gateway to the northwest.  The Perceval family who run this boutique hotel have called this home since 1665.  Descended from Ascelin Goval de Perceval, a revered Knight of King Arthur’s Round Table, the Percevals have a history as fascinating and complex as Ireland itself. Despite aristocratic origins, Temple House is not fussy, but rather a lived-in beguiling time capsule of the region’s past 400 years.  We loved the soaring eagles demonstration at Ireland’s largest sanctuary for birds of prey, just outside the estate gates.  Really, accommodation doesn’t get more authentic than this.

2.         See Slieve League:  Little known compared to the famed and smaller Cliffs of Moher to the south, Slieve league near Killybegs, Donegal offers Europe’s highest sea cliffs at about 2,000 feet.  It’s exhilarating and a little bit scary in parts hiking the trails here.  Still, unlike jostling for position among the million visitors every year to the Cliffs of Moher, there’s a decent chance at Slieve League that you’ll get this view of lifetime all to yourself.

3.         Drive, hike and ride around the northwestern coastal village of Dunfanaghy, Donegal:   From a home base of the seaside Arnold’s Hotel, drive the breathtaking and heart-stopping single-lane road around Horn Head Peninsula (be prepared to back up if you meet another car).  Hike across the dunes formed in the great storm of 1839 to the vast expanse of Tramore Beach.  Finally, ride lovely Irish ponies from Arnold’s across the tidal flats of Dunfanaghy Harbour (kids will love the cheeky, but trustworthy pinto Jack).

4.         Visit the Doagh Famine Village on the Inishowen Peninsula:  Don’t be fooled by the homemade, school-project vibe of the displays here.  Owner/tour guide Pat Doherty shares his impressive, passionate and personal connection to local life during and since the Great Famine of the 1840s.  Indeed, the Famine Village was his ancestral farm.  In an age where multimedia, interactive displays vie for our fleeting attention in museums around the world, this no-tech attraction is easily one of the best, most compelling exhibits about a local culture that I’ve ever visited.

5.         Take a Black Cab Tour of The Troubles in Belfast: Giant’s Causeway, the Bushmills distillery, of course the new Titanic exhibits — all are worthy Northern Irish attractions.  Still, to get inside the Ulster sensibility, one can’t ignore their history of religious strife.  From the square window frame of an old English black cab, you’ll view the famed (and weird) murals of gun-toting IRA martyrs, among other tragic landmarks of this city’s Protestant/Catholic conflict. Cabby guides narrate the tours with a seemingly infinite depth of knowledge on the subject.  Indeed, it’s a bit like being a guest at somebody’s big family dinner when a sibling fight breaks out.  You’ll learn more uncomfortable information than you ever wanted to know, but it’s all fascinating.  However uneasy the experience, it certainly explained a lot for me about the slightly fey side of my Beatty lineage.

For more info on Ulster and Ireland in general, I like the Eyewitness guides, and the online city and travel guides of National Geographic Traveler. 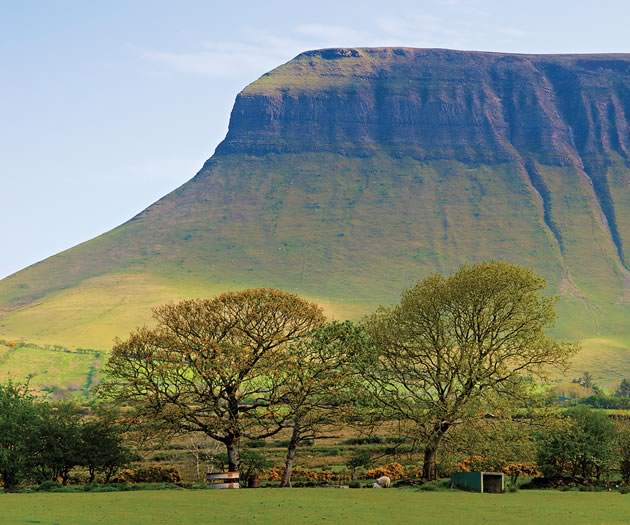 A trip to explore their Irish roots brings three generations closer to their Caledon home.