Every summer for the last four years, artists and chefs have come together at the Alton Mill in a feast for the eyes and appetites. 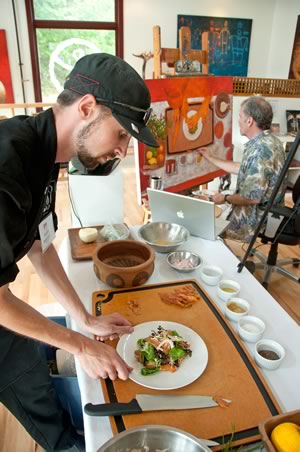 Owen Vulpe of What’s Cookin’ in Erin demonstrates the art of salad making in the Paul Morin Gallery, and Paul Morin paints on the right. Photo by Pete Paterson.

The barbeques are fired up. The pressure is on in the courtyard at the Alton Mill on a sizzling hot July afternoon. Chefs Owen Vulpe of Erin’s What’s Cookin’ and Josh Blake of Soulyve Caribbean Foods in Orangeville examine the ingredients in the mystery black boxes before them – garlic, baby leeks, heirloom cherry tomatoes, red mountain spinach, raspberries, lavender and chicken.

Their challenge in the annual Cuisine-Art local food faceoff is to create an original dish from these disparate parts. The assembled audience will decide whose ingenuity wins.

The next hour is a whirlwind of slicing, dicing, sautéing and stirring, the watching foodies salivating and sighing as the smokey aroma of charred chicken and crushed berries fills the air.

“You have to be tough not to let the pressure get to you,” says Owen, reflecting on the contest months later. He and Josh were just two of the 15 local chefs who took part in one of many performances and displays at last summer’s fourth annual Cuisine-Art, an event that brings artists and food lovers together for a weekend-long culinary cultural carnival.

Twenty-five resident artists showed and demonstrated their work while visitors sipped and supped at tasting stations featuring local wine, beer, cider, and delicious food for as little as a toonie a taste. There were painting workshops, cooking demonstrations, live music, an evening performance of As You Like It and, of course, the celebrity cook-off sponsored by Eat Local Caledon.

Alton Mill developer Jeremy Grant sees the festival as a marriage of true minds. He thinks of food as both art and the inspiration for art, so when they were brainstorming a few years ago for a summer event, it seemed obvious to link artists together with the many chefs and food producers in the area. “Cuisine-Art was a natural fit,” he says.

In the end, Owen’s sweet and silky sauce redolent of lavender and garlic edged out Josh’s pan-seared chicken roll. “It was a crazy game,” says the winner of his experience, “but the best part is Josh and I have become good friends.” 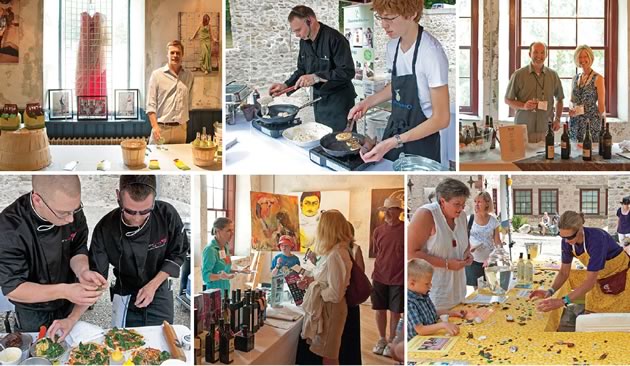 Cuisine-Art 2013 opens on the evening of Friday, July 19, and continues through the weekend featuring celebrity chef cook-offs and tastings. $30 for a Sip & Savour tastings pass ($20 in advance). Alton Mill Arts Centre in the village of Alton. For ticket information, 519-941-9300, www.altonmill.ca, or purchase at Scotiabank 97 First St. Orangeville, which has agreed to match funds for their ticket sales.

The Humber River Shakespeare Company presents As You Like It on Friday and Saturday at 7pm. Tickets $20 at www.humberrivershakespeare.ca

The Players for Cuisine-Art 2013 include:

Alton Millpond Walk ‘N’ Talk ~ Get the inside scoop on what your generous contributions are going towards! The Alton Millpond Rehabilitation Committee wants to share with you; a brief history of the dam, what’s happening in the pond in terms of its ecology and role in a healthy landscape, and the next steps in this fascinating community project. Let’s go for a walk!