Sarah Hallett’s delectable sweets have locals coming back for more.

Sarah Hallett, the cake-baking diva of Roseberry Farm, greeted me at her farmhouse door and ushered me into her beautifully renovated kitchen. We sat at a table drinking hot milky tea made in a pot and served, as I like it, in big hand-warming mugs. I couldn’t resist the open tin of homemade cookies.

Though it was late April, spring hadn’t wrestled free of winter’s grip, but that didn’t bother Sarah. Her dark eyes blazing, she beamed, excited because the market season would soon be upon her again. Within weeks this British native would be spending Fridays baking quadruple chocolate cakes, millionaire’s shortbread (also known as cardiac slice), chocolate brownie cakes with salted caramel butter cream and other incredible sweets – and selling these delicious treats on Saturdays to her “friends” at the Creemore Farmers’ Market.

Sarah and her husband Paul brought their three sons to Canada in 2006 when his employer, the British Army, offered him a two-year exchange. When the gig was over, the couple decided to stay “for the kids,” or so Sarah thought. Gazing across the high-ceilinged, spare but comfy kitchen and out the big picture windows to the Mulmur hills, she said, “I didn’t even aspire to have a home like this when I lived in England … We sold a 600-square-foot house in York, and it almost paid for this farmhouse and 26 acres.”

When the couple first arrived at Camp Borden near Barrie, their youngest son Oliver was an infant. As much as Sarah loved staying home with him, the first extended break she’d had from her career as a chef and then as an account executive for a toy manufacturer, she needed more to do. So she pulled out some old recipes and returned to her first love: baking.

Demand for her sweets snowballed. Soon her cakes, scones and Christmas puddings were available in half a dozen local establishments. But everything came crashing down when both her brother and father became ill. She closed her business temporarily and hurried back to England. Sarah’s father recovered, but her brother died, and she returned to Canada with a heavy heart.

Upon her return, Sarah also had to face the reality that, despite her hard work, her baking business made no money. She had to either scale it up or pare it down, and she chose to downsize so she could stay in close touch with her customers.

“One of the biggest things for me,” she said, “is that at the market I get to see the people I sell to. I hand my baked goods to them personally.”

She decided to satisfy her family’s financial needs by taking a day job, and limiting her baking to custom orders and what she could sell on summer Saturdays at the market in nearby Creemore. 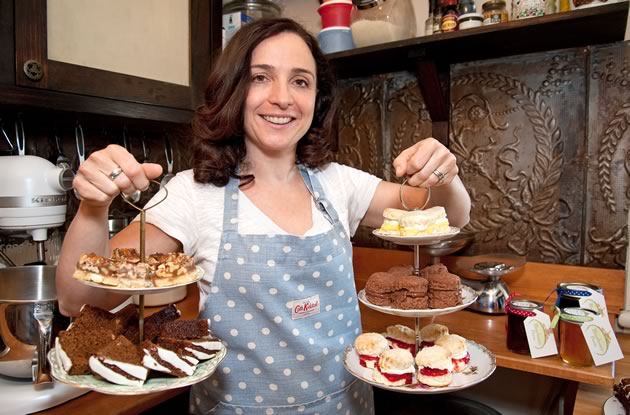 This decision was reinforced when she returned to the market after her extended absence. “I didn’t think anyone in Creemore knew about my brother, but they came up to me one after another and said, ‘I hear you’ve had a tough time.’ Then they asked me how I was doing and often they gave me a big hug.” She discovered that unlike the British, Canadians share their stories and are willing to talk about the good and the bad. This openness made her feel at home. “I’d never felt the same sense of community in England,” she said.

These days, Sarah is such a part of the local community that when she obtained her Canadian citizenship in April, the Creemore Echo congratulated her. And she doesn’t just embrace her adopted home in her heart, she also embodies it in her baking. “I get my butter from Alliston, and my milk comes from Miller’s Dairy in Creemore. Heather and Keith supply me with eggs the same day they are laid, and I buy honey from John at the market.”

Sarah turns these local, top quality ingredients into buttermilk scones with Devonshire cream, toffee nut crunch cake, brownies with sour cherries, ginger cake and other irresistible desserts – and sells them back to the local community every week at the market.

On the odd occasion when she has leftovers, Sarah exchanges them for fresh herbs grown by Graham Corbett and Amy Ouchterlony of nearby Fiddle Foot Farm. Sarah’s jams, marmalade and oat bars are also available year-round at the Bank Café in Creemore. At Christmas, the Creemore 100 Mile Store carries her Christmas puddings.

To understand what the fuss is about requires no more than a taste of Sarah’s sublime desserts. After diving into a chocolate brownie cake with salted caramel butter cream, Cecily Ross, a Creemore resident and editor of Food In The Hills magazine, moaned, “Oh my gosh, it’s way better than sex.” And former CBC Radio host Andy Barrie, a regular at the Creemore market, explained that when he left home and no longer had a parent who would bake gingerbread for him, he had to learn to make his favourite dessert himself. “Then I tasted Sarah’s ginger cake,” he said, “and I realized I’d never have to make it again. Sarah’s really is the best.”

“For me, baking is therapy,” Sarah says. “It’s soothing and relaxing, and the end result makes my friends and family smile.”

Sarah’s fans will be pleased to know she has plans to “bump up” her baking business. “I realize that it isn’t money that makes me tick,” she said.

Roseberry Farm   ·  Proprietor Sarah Hallett  · 705-794-8943  · Cakes and Other Sweets Available at the Creemore Farmers’ Market Saturdays 8:30am to 12:30pm Until Thanksgiving  · Jams, Marmalade And Oat Bars Year round at the  Bank Café, And Christmas Pudding In Season at the 100 Mile Store, Both In Creemore   · Occasionally Sarah shares a recipe with us on her blog on Food in the Hills.