Athletes who have competed at the very top of their discipline don’t always make the best teachers, so I had some reservations as I headed to the Glen Eagle Golf Club north of Bolton for a lesson with Canadian golf legend Sandra Post. I needn’t have worried.

Now 65, Sandra tore up the greens in late 1970s and early ’80s. An Oakville native who now lives in Caledon, she started playing golf when she was five and began her career on the Ladies Professional Golf Association tour at 19, becoming the first Canadian woman to break into the ranks of the top pros. That year, 1968, she became the youngest player to win a major championship, a record that stood until 2007, and was named rookie of the year.

During her 16 years on the tour, she won eight tournaments, placed second at the U.S. Women’s Open in 1975, and was a top money winner, accomplishments that earned her a spot in Canada’s Sports Hall of Fame. 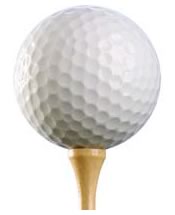 On a breezy but sunny April afternoon, I jumped into a golf cart with this sport trailblazer, and we drove away from the clubhouse to the Sandra Post Golf School.

Separate from Glen Eagle’s main and public courses, which include 27 holes in all, the school consists of a private driving range, an area for pitching and chipping, a sand trap for bunker play and a putting green. It also shares a four-hole teaching course with Glen Eagle’s junior camps. This enables Sandra to help her students with all aspects of their game, and to assess their strengths and weaknesses in both structured and real situations.

“Have you played golf before?” she asked as we stepped out of the cart. With the Oak Ridges Moraine sweeping out before us and the smell of freshly mown greens bringing back memories of summers past, I explained that although I knew how to golf, I wasn’t good at it and hadn’t hit a ball in about 20 years.

“You look strong and athletic,” she said. “I’m going to start you out with a hybrid club. It’s sort of a cross between an iron and a wood.”

I took a couple of practice swings with the light but powerful club as Sandra watched intently from behind aviator sunglasses, studying my game, and me.

“Keep swinging until you hit the ground,” she advised. When I continued to clear the turf, she gave me a few pointers, comparing my position to what I might have picked up in tennis, a sport I told her I played with some skill.

Sandra then teed up a ball on the driving range and watched carefully as I approached it – assessing, always assessing. My first few shots alternated between awful and pretty decent. Then I tried out a driver. Unlike the wooden variety of my golfing experience, the Adams club Sandra handed me had a head the size of a cabbage but was, nonetheless, incredibly light.

“Don’t swing too hard,” she advised. “Let the club do the work.” To my delight, my ball sailed when I gave it a firm but gentle thwack. 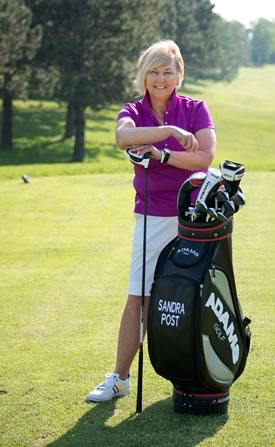 Sandra Post, the first Canadian woman to break into the ranks of the top pros, now runs a golf school out of Glen Eagle Golf Club north of Bolton. Photo by Pete Paterson.

Given her golf résumé, Sandra might be expected to limit her teaching to highly skilled players who want to tweak their game – to hit par rather than two over. But this isn’t the case. She doesn’t shun beginners, but her skill shines brightest when she works with dedicated students. “I don’t prefer women over men, or beginners over pros,” she said. “I like working with students who will put in the effort.”

If Sandra has a teacher’s pet, Barbara Bank would be it. Barbara was 58 when she took up golf. “I had never done anything athletic in my life. I read books,” she explained. But after a friend bullied her into entering a charity golf tournament and she won the booby prize for finishing last, she decided to do something about it.

Four years, many lessons and a ton of practice later, Barbara is on track to meet her coach’s expectations. “Sandra told me I had good hand-eye co-ordination, and if I worked hard and kept my cool, I would become proficient enough to play golf with anyone.” With a 26 handicap, Barbara now often breaks 100, meeting the goals she set with Sandra.

Like most golfers, Barbara has discovered the game can be frustrating. You might play brilliantly one day and like a duffer the next. Learning the sport from Sandra does not mean you can avoid the game’s pitfalls altogether. But her skill in assessing students’ potential, her frankness in telling them what they should expect to achieve, and her diligent coaching help students stay the course.

“If you work hard, Sandra will meet you way more than halfway,” Barbara said.

Sipping coffee in the spare but elegant Glen Eagle clubhouse after our lesson, Sandra nodded toward the heavens. She was thanking her now-deceased father for involving her in a sport that paid well and can be played at any age by people whose hip or knee replacements, arthritis, or heart or other conditions might exclude them from many athletic pursuits.

When she retired from the tour in her 30s, Sandra said, she never dreamed she would become an instructor, much less still be instructing in her 60s. Now she can’t imagine ever retiring.