Having just mated, bugs begin dropping dead on the river and at precisely 9:10, Rob ties his fly and announces he’s going to fish.

What are your special places in the hills? These are the stories we want to celebrate here. Those beautiful, wild, or quirky spots. The neighbourhood diner, the ruin in the woods, the hidden lake. Whatever they are, whatever makes them remarkable, we want to know what keeps you circling back — what makes these local touchstones so important. In this inaugural post, my friend, master fly fisherman and guide, Rob Uffen, helps get the ball rolling. 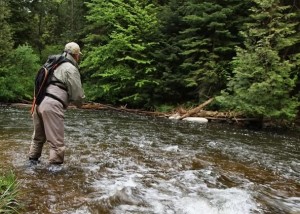 Rob Uffen is a professional musician, a master fly fisherman and guide, a chef and innkeeper of the Trout House B&B in Melancthon Township. Photo by Liz Beatty.

On this day, Rob Uffen is a groover, not a mover. There’s no indecision where he’s going to fish, no casting then moving on in pursuit of more fruitful waters. No, on this early summer afternoon, Rob parks his 1988 Westfalia, dons his waders, walks into the bush somewhere north of Hwy 24 and emerges on the bank of a pool he’s had in mind all week.  He is, as the term implies, grooving in for the long haul.

Indeed, no one knows better than Rob — sometimes it takes hours for the perfect fishing hole to reveal itself.

An hour later, a fellow fly fisherman, an older guy, comes by. They chat, and as etiquette dictates, he asks Rob if he can fish the spot. “Sure,” says Rob gazing out onto the river, no rod in hand. “Nothing’s going to happen here until 9:15 this evening.”

The older man casts. Nothing happens, so he disappears into the cedars. Hours later, the old “mover” returns. More small talk, and again he asks to fish. “No problem,” repeats Rob. “Nothing’s happening ‘til 9:15”. It doesn’t and he moves on again.

Two more hours pass and Rob, all Zen-like in the same idyllic wooded spot, still hasn’t made one cast. The sun disappears behind the trees. Old “mover” returns, and conversation resumes. Rob chats and watches as, with dusk, the insect world grows lively.

He stands up, steps forward and with one perfect cast hooks a 20-inch Brown Trout — just like that. Old “mover” flips out and with jaw-dropped in amazement he eventually disappears into the bush, no doubt off to tell his buddy, who’s been grooved in upstream for hours. 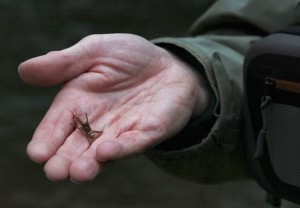 Such is the “drug of the tug” — you’re addicted, or you’re not. Photo by Liz Beatty.

Now don’t ask Rob where this happened. He won’t say and if he did, he says he’d have to kill you. Anyway, the perfect fishing hole seems as much a confluence of time and state of mind as it is a specific locale. Thing is (and BTW, Rob hates fisherman who over-talk this stuff) you’re either a fly fishing type of person or not. You’ve either got the patience to tie the perfect fly, to match the hatch of local insect species or you don’t. You either want to mediate on every lie, every dimple in the water. Or, frankly, you don’t. Such is the “drug of the tug” — you’re addicted, or you’re not.

However, Rob did divulge these tips about fishing the Credit:

As to revealing that perfect fishing hole in the hills — well, Rob insists, you’ll simply have to move or groove to find your own.

Rob Uffen is a professional musician, a master fly fisherman and guide, a chef and innkeeper of the Trout House B&B in Melancthon Township. And yes, the Trout House sits on the bank of a perfect fishing hole. www.robuffenstrouthouse.com 519-925-5016