Back in your own backyard

Amanda and Owen Vulpe have dubbed their backyard vegetable garden ‘the great experiment.’ 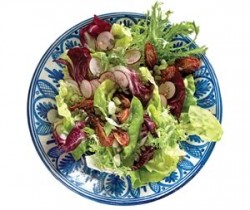 Before Owen and Amanda Vulpe moved to Erin two years ago, they grew fresh herbs and pots of cherry tomatoes on the fire escape of their downtown Toronto apartment. They realized wherever they could find a patch of earth they could grow good things to eat. Today, the owners of What’s Cookin’ Kitchen and Catering have the luxury of a half acre of land behind their village home, and they are making the most of it.

In five raised beds Owen and Amanda are conducting what they have dubbed “the great experiment.” Now in its second year, Owen says their biggest successes have been with green beans, carrots, cherry tomatoes and three varieties of potatoes. The 31-year-old chef is passionate about the process. “Of course, I have always known where potatoes come from,” he says. “But until you reach into the ground and pull one out of the earth, you don’t really get it.”

Owen is just one of a growing number of people, young and old, who have discovered that the ultimate local food is what you grow in your own backyard. In its 2013 “Winter Garden Trends Report,” the U.S.-based Garden Writers Association anticipates an 11.3 per cent increase this year in the number of people growing their own food.

Spurred in part by the burgeoning slow food movement, U.S. first lady Michelle Obama’s White House kitchen garden, and economic necessity brought on by the financial crisis of 2009, the growing interest in neighbourhood vegetable plots in the Headwaters region and elsewhere is reminiscent of an era when Victory Gardens planted in backyards and empty lots contributed to wartime food shortages. That campaign resulted in over 5 million gardens and foodstuff production exceeding $1.2 billion by the end of the Second Word War. But it wasn’t just the economic benefits of gardening that mattered. Getting citizens out of their houses and into their gardens was considered a way of boosting civil morale during troubled times.

Today, as we enter a new millennium and a world of breathtaking technological change, the simple and timeless practice of planting, growing, harvesting, and eating food we have grown ourselves is surely as beneficial to the soul as it is to the body and the pocketbook.

Creemore resident Sara Hershoff has been growing vegetables in her small backyard for more than two decades, in part to feed her husband and three sons, now aged 17 to 22, but also because as the child of back-to-the-land parents, gardening is in her blood. “You grow food,” says Sara. “It’s never really occurred to me not to.” And she does it these days more out of habit than necessity, but also for the pleasure of watching things grow. Indeed, her backyard is a cacophony of vegetables and flowers. Swiss chard flirts with daisies, dill and basil snuggle up to goutweed. Leaf lettuce pokes up between the flagstones. Cilantro runs rampant, while runner beans climb a webbed trellis.

“I’m not very systematic,” Sara says of the jumble of raised beds and trellises in the small lot behind her village home. “Sometimes I grow vegetables just because they look nice.” Her response to poor performers is to banish them. “I like resilience. I like volunteers, the things that grow in the cracks.”

But the haphazard jumble of plants and flowers in her garden belies a method that is not as mad as it looks. Making the best use of her limited space is one issue that determines what goes where. “Think roots and leaves. Think high and low. Think of when they’re ready,” she says, summing up her planting strategy. “I plant carrots next to lettuce to maximize space, because one grows up and the other grows down.” Cucumber vines climb up a homemade tripod because sending them up takes up less room. 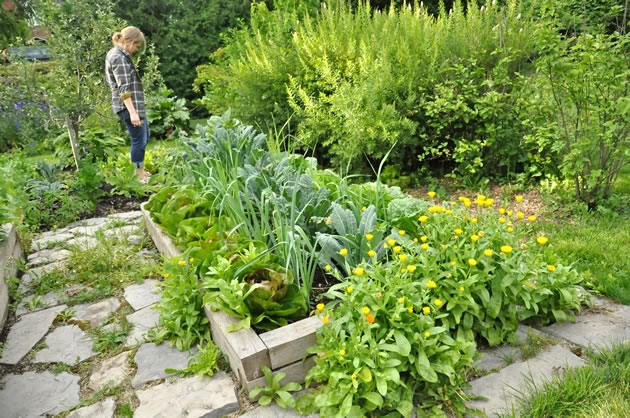 Sara Hershoff in her garden. “You grow food,” she says. “It’s never occurred to me not to.” Photo by Trina Berlo.

Asthetics are also a consideration. “I plant purple leaves next to green, and feathery plants next to broad-leafed ones because I like the contrast in colour and texture.” Basil, peppers and tomatoes share space in what Sara calls her “pizza garden. It’s weird, but they just go together,” she says. “They like the same conditions.” 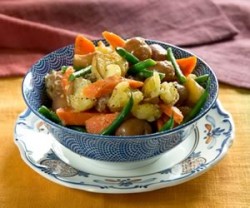 Years of experience mean growing vegetables is second nature to Sara, while Owen is still learning by trial and error.  His goal is to perfect what he calls “the culinary sisters” – carrots, celery and onions. These three simple vegetables, he says, are  at the heart of French cooking. “I have to have those.”

Both admit gardening is hard work, but agree the rewards far outweigh the effort involved. “Big food,” says Owen, “has fooled us into believing that growing food is difficult. But it’s not. All you need is soil, water and seeds. It’s unbelievably simple.”

Why grow your own?