It was a summer that shone so brightly for me that I will never forget it, and neither will my son.

It’s been a long season of baseball for the Bolton Braves rookie rep team, and as I write this we are prepping for a “kids-versus-parents” game (and wondering if parents will stand a chance against the rookies) and for the final Ontario playoff tournament.

My son Adrian is eight and a half now, and loves the sport of baseball. He tried out for the Bolton Braves rep team and was selected. Over the winter, the boys and the one girl on the team played indoors at a tiny gym in downtown Bolton. They travelled to Vaughan to an indoor baseball camp. It was a lot of fun, but sometimes they could barely keep the ball alive in drills, they missed throws, a visiting baby sister took it in the face when a throw went wild, and she dropped and bled profusely for the rest of the night (and, oh yes, it was my son who threw the ill-fated ball).

Oh boy, this is going to be a long season, I thought. Combine it with Saturday mornings for race team on the ski hill, and I was feeling a mixture of, well, I wasn’t really sure how I was feeling about team sports.

Give it a try, I said to myself. Keep the momentum going. Being the parent of a child in team sports is fairly new to me, even at Adrian’s ripe old age. But as an only child, he really did need companionship and other kids to play with, and adult figures to look up to. And a schedule. And accountability. Wait a second – I was getting sucked in to this whole “team” thing!

I couldn’t have asked for more out of the season. It helped that I instantly liked the coaches. They were a combo of three dads, and each brought excitement to the game in his own way. My heart grew three sizes when I read “The Rules of Baseball” that Coach Mike sent home with the kids. The energy was positive and peppy, and I could see over the winter months that the kids were improving. “Go, Braves!” they cheered.

The spring day they lined up to receive their uniforms from Coach was a highlight. He had the blue stitched jersey, red warm-up shirt and grey pants bundled by the belt, with the player’s number showing and the hat presented on top. He shook each player’s hand and asked them to wear it with pride. Swoon.

What I didn’t realize was how competitive the field would be once the season began, and how our little Bolton team, while fielding a solid turnout and looking spiffy in their uniforms, was nowhere near the calibre of the teams North York, Barrie, Richmond Hill, Vaughan and the rest of the league had spawned. Those players were my size, I swear! It was intimidating, and we lost – over and over.

But each time, the coaches thanked the other team, led a cheer, had fun out on the field and went over some lessons learned. Coaches and kids thanked the parents. We had a great pool party. The kids swam until they were blue and their teeth chattered, and they ate soggy chips and pizza with wet hands. We suffered near heat stroke several times, while at other times parents bought coffees to warm each other up. 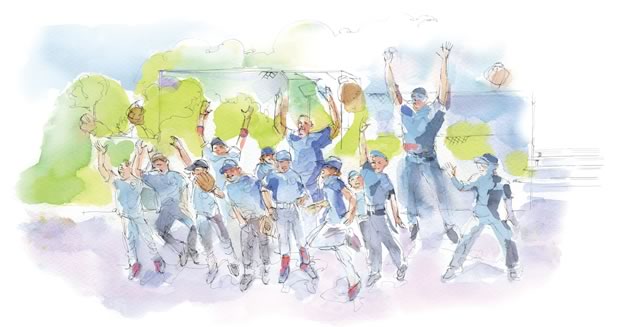 Each time, the coaches thanked the other team, led a cheer, had fun out on the field and went over some lessons learned. Illustration by Shelagh Armstrong.

Meanwhile, I heard about a friend’s experience coaching hockey. His team had a few minor problems that tainted the experience from the beginning. A small handful of parents moaned about ice times and the amount of play time their up-and-comers were given. Letters were written, meetings had – and the sport of the game was soured by politics, criticism and troublemaking.

In a recent survey by ESPN in the United States, conducted among youths (ages 10 to 18) who play competitive sports, the respondents reported that 87 per cent of their parents mention the amount of time and money sports participation costs, and 79 per cent get upset when their child “did not play as well as they would like me to in a game.” Furthermore, 70 per cent said the time they devote to sports makes it difficult to complete their school work. Hmmm.

I feel badly that my coaching friend’s season was lost and he now wonders if he will coach again this year, or ever. He is a great volunteer and a very talented player. It would be a loss if he didn’t. These are the aspects of team sports that make us cringe. We pray that our child wants to learn springboard diving, or maybe ride a horse, or just keep playing solitaire on the living room floor.

On the other hand, my heart sings for how much my son learned this year in baseball and how much he gained from making new friends, seeing new places, being challenged on the field and being looked after by his team. In the same ESPN survey, a whopping 98 per cent of the kids said they like playing their sport. And asked why they play, 90 per cent said they play to have fun!

Did I luck out this year? I would like to think our experience is the norm. It was a summer that shone so brightly for me that I will never forget it, and neither will my son. I hope we’ll have a repeat performance next year, win or lose. “Go, Braves!”

Head over to the library on September 26 at 7 p.m. for some lunch box ideas. Join naturopathic doctor Jilan Koch for an informative talk on preparing delicious, nutritious and satisfying pack-and-go school lunches, and learn about basic nutrition for kids. It’s part of the library’s Health and Wellness series. Registration is not required. Orangeville Public Library, Mill Street location.

More Learning at the Library…

“Dress for a Mess”

We love that the Headwaters Arts Festival is letting everyone know to “Dress for a mess.” How fun! The festival offers many activities dedicated to kids and families over the weekends of September 21 and 22, and 28 and 29. From pottery to photography, dance to encaustic collage, it hosts a number of events that lets kids loose to express their artistic side. Get your smocks ready and join the fun. The full schedule is at www.headwatersarts.com/festival/kidsfest-events

Keeping the Air Clean for our Kids

Kudos to Caledon for adopting the Peel Outdoor Smoking By-law, effective September 2, which makes it against the law to smoke outdoors within nine metres (30 feet) of entrances and exits of municipal buildings, playground areas and outdoor recreation facilities. The idea is to help protect children and the public from the harmful effects of second-hand smoke. Questions, or want to learn more about smoke-free living? Call the Region of Peel, Public Health at 905-799-7700 (toll free from Caledon at 905-584-2216), or visit www.smokefree-peelregion.ca

Giving Makes the World Go ’Round

As you get ready for the season of giving, consider a very special way to send your message this year. Marilyn Field is the founder of the DAREarts charitable foundation, an organization that has had significant impact at the local, national and international levels by bringing the arts to children from all walks of life. In 2003, she was awarded the Meritorious Service Medal and The Queen’s Golden Jubilee Medal, and very recently she received a place on Caledon’s Walk of Fame. Through DAREarts, 3,000 local children paint original art cards to help Canadian Aboriginal children living in remote communities. Call DAREarts to buy the cards or find out where they will be available this season. 905-729-0097, www.darearts.com

Kids in the Hills

Back to school is upon us. We hope all is going smoothly for those who are returning to school, are first-time students, or have just moved to our area. Welcome – we wish you well this school year! And please drop by kidsinthehills.ca anytime to see what’s new. —Bethany