A Path to Stillness, Clarity and Wisdom

The International Tai Chi Centre in Mono draws people from around the world to practise the ancient art.

If you live in these hills, you have probably driven past the International Centre of the Fung Loy Kok Institute of Taoism, aka the Tai Chi Centre, on the east side of Airport Road just north of Highway 9. You may even have wondered what goes on behind the trees and flagpoles that obscure a clear view of the site. But chances are you haven’t driven up the laneway to see for yourself.

When I attended a two-hour class there one Saturday morning, I was one of about 75 students, most from southern Ontario, but some from the United States and Europe. I met people from Guelph and Stratford, Toronto and Waterloo. They were attending either a weekend-long or week-long course in lok hup, a practice similar to, but more fluid than, the better-known tai chi.

I had trouble spotting anyone else from the Headwaters region, even though a woman from Columbus, Ohio, spoke of the “Orangeville Centre” as if this remarkable local institution were to tai chi what Carnegie Hall is to music. She is a member of the International Taoist Tai Chi Society, a registered charity that includes branches and chapters in 26 countries around the world. The 104-acre centre on Airport Road is the society’s model and largest training facility.

If you were to drive up the lane, you would find an extensive complex of buildings, the most impressive of which is the nearly 5,000-square-foot Great Hall of the Three Religions. In this pagoda-like, pink-trimmed temple, guests and members can “observe the unified teachings of three religions: Confucianism, Buddhism and Taoism.” There is no monk, but people chant every morning at 7:30.

The Great Hall is part of the Quiet Cultivation Centre, which opened in 2007 and includes the Hall of the Original Constellations, the Memorial Hall, meditation suites and a practice hall, where I attended my class.

The site also includes the Health Recovery Centre and an office complex, as well as a cemetery and a columbarium – for storing human ashes. In addition, one of the property’s original farm buildings is now a temple known as the Canadian Branch of Guangdong Chi Wo Tan. About 200 people can be accommodated on the site, and there is also space for those who choose to bring along tents.

The architecture may seem a little strange to an eye accustomed to more traditional southern Ontario styles. But along with the spare and beautifully maintained gardens and manicured lawns, it blends uncannily into the open fields. Still, as I wandered up the broad avenue toward the Great Hall with its sweeping roofline, and passed between the pair of lions that guard the entrance, I was momentarily transported to a foreign land. 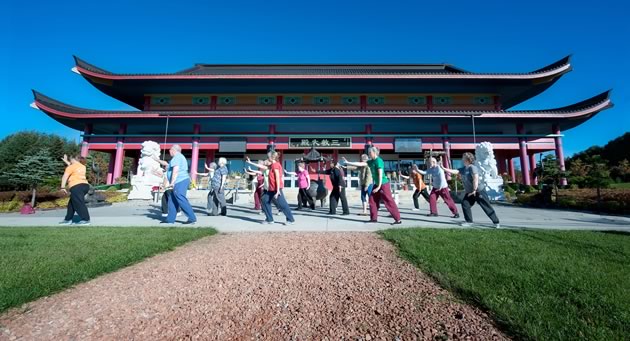 The ancient Asian practice of tai chi straddles a divide between religion and sport – and involves a set of linked moves that are a slow-motion version of an ancient martial art. Master Moy Lin Shin, a Taoist monk born in Taishan County, Guangdong, China, immigrated to Canada in 1970 and established the Tai Chi Centre in 1984. Moy developed the set of 108 moves that set Taoist tai chi apart from other forms of tai chi.

Now practised by people all over the world, these moves not only promote physical health and well-being, but also help “the mind return to stillness, clarity and wisdom.” Along with meditation, chanting, community service, rituals and ceremonies, tai chi and lok hup are foundations of Taoism, but participants are not required to embrace Taoism, or any religion for that matter. People of all affiliations are welcome.

When I asked other students what drew them to tai chi, all said it helped them feel better. For three years Clare Matthews, a longtime Hockley Valley resident, has attended four or five classes a week at the centre. “It has improved my quality of life,” she said. “It’s the little things that become easier, like bending over to open a filing cabinet drawer at work.”

Though Clare is most interested in the physical benefits of tai chi, she occasionally attends the chanting, which she likens to having a cup of coffee. “It’s uplifting.” Tai chi has also helped bring her inner peace. “I’m less extreme, more calm,” she says.

John Huang, who was born in Hong Kong but now lives in Sarnia and is a practising Catholic, led my class with the assistance of about 10 senior students. A member of the Tai Chi Centre since its inception in 1984, the soft-spoken 70-year-old teaches classes at least once a week, volunteering his time, as is the tai chi tradition.

John received much of his training from Moy before the master’s death in 1998. Adept in both tai chi and lok hup, and as limber as someone 30 years his junior, John begins the class by saying, “Learning the moves is the easy part.” If so, then it is going to be hard work for me to find the stillness, clarity and wisdom tai chi and lok hup are supposed to promote.

I do my best to follow the instructor who leads our small group of five through a series of flowing moves that remind me of the steps to a complicated dance. Although lok hup is more fluid than tai chi, it shares many of tai chi’s characteristics, which are often described as “meditation in motion.” Both require co-ordination, relaxation and an enormous dollop of concentration. They are intended to gently and measurably increase circulation.

Tai chi’s healing powers are well documented. The Mayo Clinic recommends it for stress management, stating, “Tai chi is low impact and puts minimal stress on muscles and joints, making it generally safe for all ages and fitness levels. In fact, because tai chi is low impact, it may be especially suitable if you’re an older adult who otherwise may not exercise.”

I appreciated how following the moves totally engrossed me. Gone were my concerns about meeting story deadlines or remembering to call my mother. My mind and body were right there in that high-ceilinged practice hall decorated with bright red and gold Chinese lanterns, huge wooden drums, and a long, sinuous, fire-breathing dragon that had been carried overhead by a cast of 50 at the Vancouver Olympics.

I soon forgot about having two left feet, especially as no one else in my beginner class seemed much more adept at the moves than I was. And besides, there was no pressure to do things exactly right. It was more a case of trying hard, and if I got frustrated, someone was there to help, or I could take a break and wander over to a table laden with fresh fruit and hot tea.

It would be easy to go on about the Tai Chi Centre and all that goes on there, but I’ll defer to Benjamin Hoff, who observed in his book The Tao of Pooh, “In the classic Taoist manner, we won’t try too hard or explain too much, because that would only Confuse things…”

Instead, I suggest that you experience for yourself what goes on at the end of that laneway.

Freelance writer Nicola Ross lives in Alton and is the author of the bestselling 'Loops and Lattes' hiking guide series.
Show 10 Comments