Snap, snap, snap – take a photo or two, or a few for the record. Then put the camera down and just be present.

School plays, visits with grandparents, first snowfall, first snowman, a slightly traumatic but thrilling visit with Santa, opening presents – these are the moments of the season. Our cameras are at the ready, a slim device in our back pocket or purse that can be pulled out and snap, snap, snapped.

It wasn’t always so easy. Some of you might recall the smell of chemicals released when you opened the little black film canister. The process of winding the film into your heavy metal camera was a delicate one, and the whirring of the film spooling inside the black body was mysterious, and for the less experienced, a bit of a crap shoot.

For those who dabbled in the art of developing film, the magic continued as you swirled the chemically sensitive paper in the bath and waited for the images to manifest themselves. What apparitions would appear? Whose mouth would be set in a sad line? Whose glasses would be off-kilter? Whose head thrown back, crooked teeth showing? Would the kids’ faces be clean? Happy? There were no retakes. You hoped for one good photo in the entire set.

I recall with jealousy my friends’ encyclopedic libraries of family photos – preserved in faux-leather books with gilded trim, containing photos from every event or non-event. Before the plastic sleeves of modern albums were books of black-and-white photos held in place by tiny photographic corners. Remove the photos carefully to find a scrawled date or name on the back. Those books were put together with pride and care, and they were revisited over and over as a way of telling stories and reinforcing family history.

For me, there is very little such photographic history. My memories of childhood are blurry. Was I fat? Was I thin? Did my brother and I ever hug? Did the cat really sit on my lap and like me more than him? Did I have big birthday parties that I’ve forgotten? Did I toboggan with my parents, or visit Santa?

The visual record of all those things disappeared the year we moved to a farm on Tremaine Road in Milton. My parents were organized and prepared for the move. They had packed their silky horse show ribbons in boxes – there would have been many. They had packed heavy silver platters engraved with swirly inscriptions of championship horses’ names and winnings. There were probably a few drawings and report cards.

But there were also photos. I don’t know how many, or if they were organized, or in books with sticky plastic pages. I’m sure there must have been a few in frames with dusty velvet backings. They were packed early and taken over for storage in the vacant new house while we continued to pack the rest of our belongings.

It must have been in the middle of the night when the robbery happened. One day, the boxes were at the new house. When we returned the following day to drop off our next load, they were gone. Vanished. Not much of a haul for the robbers, but why not? The boxed goods would have made it easy for the intruders to load up and hastily flee elsewhere to see what treasures were theirs.

They must have been mightily disappointed. I have often imagined the photos of me and my brother tossed aside and floating in an oily ditch somewhere near an industrial park in Milton, while the robbers took off with the silver platters under their arms. 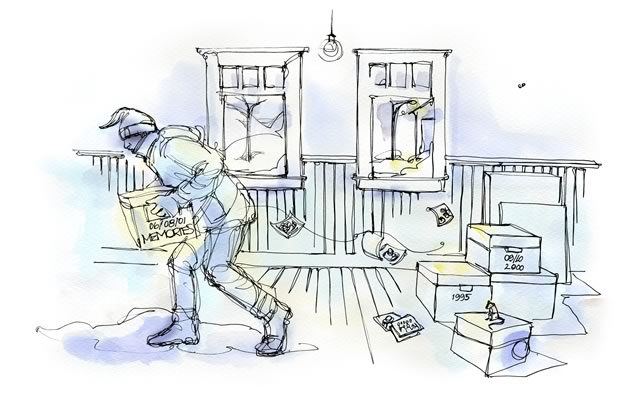 The boxed goods would have made it easy for the intruders to load up and hastily flee elsewhere to see what treasures were theirs. Illustration by Shelagh Armstrong.

My memories of my early years are fleeting. There is only a verbal record and few visual cues to start the conversation. And now, although I think I should be building that encyclopedic bank for my son to look back on, I am not very good at taking photos, or at least doing anything with the ones I do take.

But then again I wonder if we are living enough “in the moment” these days. We pose ourselves and our children, and we watch our lives and events unfold from behind a device. The images are ephemeral, caught and disposed of in social media feeds, never to be seen again.

We’ve seen audiences of thousands watching their favourite glamorous star sing into the mic, a once in a lifetime opportunity, yet the audience is busy trying to snap the best angle, get the closest close-up, only to miss the show.

The fabulous Beyoncé recently interrupted her show to stop the madness. “I’m right in your face, baby!” she said in the middle of “Irreplaceable,” as she leaned into a guy in the front row who held his device out in her face. “You gotta seize this moment,” she said. “Put that damn camera down!”

I think there is a balance to be struck here. Whether it’s a sequined, bootylicious singer in your face, or your baby with a runny nose enjoying her first toboggan ride, pick up the camera for sure. Snap, snap, snap – take a photo or two, or a few for the record. Then put the camera down and just be present.

And do something with the photo later. Save it in a precious place, frame it, preserve it from robbers in the night.

It’s the time of the year when we create and collect memories. We’ve gathered a few events and activities among the best of the season. Enjoy every minute!

Photos with the Grinch at the Alton Mill Arts Centre

Have you taken your children to the Alton Mill yet? For an art gallery, it is very un-stuffy, with wide open spaces, a café with delicious treats, and large-scale sculptures outside to admire when things get hot and pesky inside. Once the pond freezes, skating takes place throughout the season.

On November 23–24 and December 14–15 from noon to 4 p.m., bring your kids to have their photo taken with the Grinch. This holiday favourite is in its third year and is always a hit. The Mill is at 1402 Queen Street, Alton. altonmill.ca

There’s plenty to do at Peel Art Gallery Museum & Archives (PAMA)! We can’t fit it all here, but the line-up for this winter is excellent. From the PAMA “Ink Break Out” on December 20, running in conjunction with the gallery’s exhibition on tattoos (where children have the chance to learn about traditional and modern styles of tattoos, design their own tattoo and create a non-permanent work of skin art), to the “In Living Colour” day camp on December 31 that explores the fascinating world of colour theory, there is something for your inquisitive and creative child throughout the season. pama.peelregion.ca

There is a train enthusiast in all of us, and taking a tour with the Credit Valley Explorer is an experience bound to delight all ages. ’Tis the season to board this historic train which operates on the tracks of the Orangeville Brampton Railway. Departing from Orangeville, the trip’s scenic highlights include the 1,146-foot-long railway trestle bridge spanning the Credit valley at the Forks of the Credit River. Most midday tours stop in the village of Inglewood to allow for a stretch and look around. This 74-kilometre adventure on a rail route established 130 years ago along the edge of the Niagara Escarpment is sure to be a memorable experience.

All tours are sold by advance reservation and early booking is recommended. creditvalleyexplorer.com

You are invited to a most fabulous festive and fancy brunch with the Big Man in the Red Suit himself. Dress in your finest and meet up at Hockley Valley Resort, where they’re ready to welcome the entire family on December 8, with seatings at 11 a.m. and 2 p.m. There’s a pizza bar, crudités, and triple cheese mac and cheese for the kids, and roasted meats and festive salads and sides for the non-picky eaters. hockley.com

As always, events of the season are listed on our website, categorized and searchable to make life with kids in the hills easy to plan.