There is one stubborn neuron in this neighbourhood’s collective brain that will not die and it makes people refer to my house as The Old Currie Place.

I remember the first day I saw my house. It was early spring and a grey mist hung over the land. The house stood, gaunt and lonely, in an abandoned apple orchard, balanced uneasily on a crumbling stone foundation. The windows had been shot out and the weathered wood siding had the sheen of a rail fence. It looked like the last hideout of Jesse James and Cole Younger. I walked through the open door and thought how apt the real estate description had been: “This listing will not last.” There was a cow standing in the kitchen.

When I signed the papers, I took on a life’s work that has been every bit as demanding as marriage and children. For if you live in an old farmhouse long enough, it becomes an extension of your own body. You hear every pop and gurgle it makes. Wives and children will eventually find ways to distract themselves, but the house remains a jealous mistress and will not be ignored.

There is a sturdy myth out there that the human body works away quietly, replacing bone and tissue with new material until, after seven years, we are completely renewed. Strictly speaking, this is not true. A scientist will tell you that the body is constantly renovating and rebuilding, but to say the job is finished every seven years overlooks the fact that some cells in the heart muscle and neurons in the brain can live for a hundred years and more. 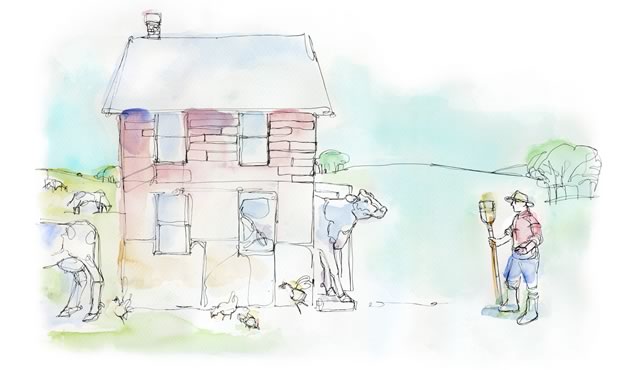 Wives and children will eventually find ways to distract themselves, but the house remains a jealous mistress and will not be ignored. Illustration by Shelagh Armstrong.

That’s how I look at this house. I can point to the multitude of improvements I have made since 1978. In fact, the only traces of the original house still visible to the naked eye are the pine floorboards in the kitchen and the kids’ rooms upstairs. Everything else is pretty new, historically speaking. But it doesn’t feel new at all. Whenever I rip off a section of drywall or crumbling tile, I find the rough-sawn timbers that were carted up the Jardine Sideroad from the lumber mill on the Pretty River by Peter Currie in the summer of 1880 and the lines and squiggly calculations he drew on them in pencil.

It must have been a big deal for Peter, for he was moving his wife Ellen and his young family out of the log shanty that used to sit where my raspberries now grow. Ellen’s father, an Islay Scot and one of the first settlers in Duntroon, threw that up in 1835. Peter was named after his uncle, who was tragically killed in the first year of settlement by a falling tree.

I assume Peter located his new frame house a hundred yards north of the cabin to get out of the path of the ten-foot snow drift that settles on my raspberry patch without fail every year. Ellen’s wild roses still blossom there every year, as do the spiraea bushes that Peter’s son James planted in the 1940s on the edge of the yard. I lifted Peter’s house off the old foundation with a crane and planted it on concrete blocks farther back from the road, next to James’ spiraeas.

There is one stubborn neuron in this neighbourhood’s collective brain that will not die and it makes people refer to my house as The Old Currie Place. James died in 1965, the house stood empty until I bought it in 1978, and I have now owned it for 35 years. But even I still call it The Old Currie Place when I’m giving directions to an older resident.

We all leave our marks on a place but we never know which of those marks will still be there a century after we’re gone. A frame house doesn’t last forever, especially in a neighbourhood where venture capitalists come to retire, raze everything to the ground and build new. My legacy may be something as simple as the wall I built with stones from the old house foundation. Anyone who tries to move that is going to need deep pockets because it has a concrete footing the size of an underground car park.

But you never know, maybe the last surviving neuron in the community memory will be the one that finally calls this property The Old Needles Place.

Author and playwright Dan Needles is a recipient of the Leacock Medal for Humour and the Order of Canada. He lives on a small farm in Nottawa.
Show 1 Comment