The Patter of Little Feet

Looking after babies, even baby rabbits, is one of the best fertility treatments you can take.

The writer Sharon Butala once observed that country people understand how the world was built. “It didn’t appear whole and shiny the morning they were born,” she said. “Their mothers and fathers built it step by step every day.”

My wife, Heath, is a country person. The way in which she looks at the world wasn’t built in a day either. She belongs to a tradition of life on the land that reaches all the way back to the Druids of North Wales and it guides her on every subject from planting a seed in the ground to sealing the contents of a jar of jam. She makes weather predictions based on the movement of a leaf or the way a plume of smoke curls away from the chimney. Some of these observations are mystifying. I know spring is on its way when she comes into the kitchen and exclaims, “My, my, the house is cold! It must be warming up.” I know the heavy snows of winter are coming when she announces that “the swamps are full.”

Many of my neighbours are just like her. Eighteen summers ago, I went over to my neighbour Archie to ask him if I could buy a couple of weaner pigs to fatten in the barnyard for the freezer. Archie just shook his head and said in that dry way he had, “I don’t like to sell a man weaner pigs. Every time I do it, his wife gets pregnant.” 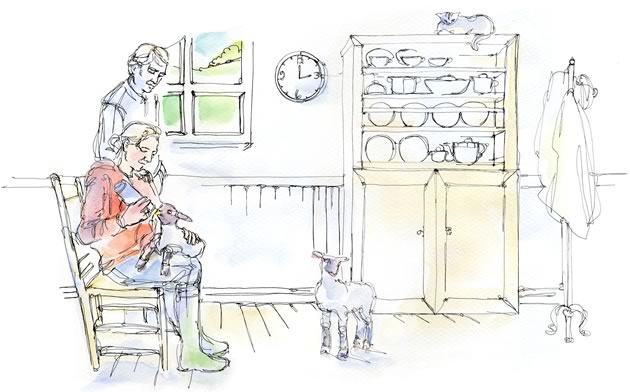 “Don’t scoff at Archie,” said Heath. “Looking after babies, even baby rabbits, is one of the best fertility treatments you can take.” Illustration by Shelagh Armstrong.

You could never tell with Archie if he was just having you on. I found myself assuring him that, in our case, this really would not be a problem. We had three kids on the ground at that point, which is what Archie would have called “a large Presbyterian family.” I explained to him that the purpose of the pigs was to help get my children out of bed on lazy summer mornings and away from the television set. After I made my case, he shrugged, hauled two six-week-old piglets out of the pen, and put them in the crate on the back of my Ford truck.

When I got home I told Heath about the conversation and she saw nothing odd about it. She told me a story about her favourite teacher in high school, an art teacher who made a special connection with her and often came out to visit her family farm. One spring morning, the teacher dropped by the store where Heath had started working and Heath noticed something was bothering her.

The teacher confided that she and her husband had been married for several years, but still had no children. This was before the days of in vitro treatments and there were very few options apart from adoption or accepting life without children. That weekend, Heath turned up at the woman’s house on a country road just outside town. She opened the door of her ancient Rambler and pulled two orphan lambs out of the back seat.

“I think you’ve just got to quit fretting,” Heath said. “I want you to bottle feed these lambs for a month and try not to think about anything else. I find lambies take your mind off everything.” Then she handed her a little porcelain elephant with its nose turned up. This was an ancient symbol of good luck to the Romans, who lived just up the road from her family back in Wales about two thousand years ago.

At the end of the summer, Heath’s friend made another visit to the farm, this time to report that the treatment had been successful. She was pregnant. She kept the lambs as pets and because there was no ram and therefore no baby lambs, the spinsters lived to be the two oldest sheep in Simcoe County. A few years later, she and her husband came to our wedding.

“So don’t scoff at Archie,” said Heath. “Looking after babies, even baby rabbits, is one of the best fertility treatments you can take.”

I put the little pigs in the barnyard and the kids all ran out to play with them for the afternoon. They played with them every morning for the rest of the summer and hardly turned the television on once.