From Mystery to Modern

Solving a mystery was just the first step in transforming a tired Pan-Abode into a contemporary, eco-friendly dwelling. 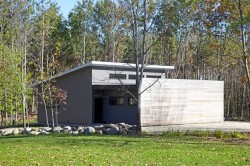 The screening at the south end of the garage protects the insulating membrane, and links the design to the house. Photo by Pam Purves.

Everything about this property involved labour. A labour of love, physical labour and mental labour. The couple who now own it had spent some disappointing months searching before they discovered the well-wooded hillside property on a seasonal road in Mulmur. Its 27 acres of hardwood and conifer, with the potential for a big view over the Mad River, included everything the couple had been seeking. Unfortunately, it was not for sale.

But it also appeared to be abandoned. All in all, it was a bit of a mystery.

Finding the owners was challenging. The resident of the house had died, so the property hunters left a note on the door. Nothing happened. Some time later, when they had all but forgotten about the property, they received a call from the heirs who said they were not interested in selling.

But after this initial contact, the heirs initiated some curious telephone conversations that appeared to have nothing to do with the property. One of the current owners said he felt as if they were being interviewed. If so, they clearly passed muster because once it was determined no one in the family wanted the property, they were allowed to buy it.

When the current owners entered the house – a 1,600-square foot, two-storey Pan-Abode probably erected sometime in the 1960s – they found all the former resident’s possessions. Furniture, journals, hand-drawn maps of local trails and so on were lying where he had left them. It was a poignant discovery, to say the least.

A more practical consideration was that the house had been occupied by squirrels and mice for long enough that the critters had become quite comfortable. It looked like a teardown. But as the new owners cleaned up and sorted through the old man’s belongings, they began to fall in love with it – and the game was afoot!

Research quickly linked the new owners to the Pan-Abode company in British Columbia, where staff generously provided advice on construction, as well as the original plans for the building. Armed with this information, the couple decided to take on the renovations themselves. 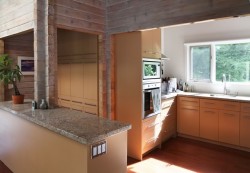 The kitchen is small but efficient with a handy servery to the dining area. Photo by Pam Purves.

They are grateful to the local suppliers and contractors who helped them through the process. Staff at Home Hardware, for example, freely offered advice, as well as the contractor’s discount; Shelburne Kitchens designed the modern kitchen; and Greg Rayner of Renos by Rayner helped install new windows and sliding doors.

Several interesting features have completely altered the appearance of the home. Some of them also protect the structure and lighten the burden on the environment.

The most striking transformation is that the house no longer looks like a Pan-Abode. The first thing a visitor sees at the end of the long lane that leads to the house is large cedar rain screens. To the uninitiated, these appear to be a decorative covering over the original prefabricated log walls.

But they are much more than that. The exterior of the original building is covered in a tough membrane that breathes, increases thermal insulation, reflects heat and protects against the weather. The rain screens help keep this membrane intact by adding additional protection against the rain and sun. Not only is the building preserved, but heating and cooling costs are also lower.

The owners had noticed the rain screens in an article in Azure magazine. They located the designer, who generously shared the plans with them. They then tracked down the membrane manufacturer, Cosella-Dörken Products, a German company. The screens were milled by Gregory Ryback of Millworks Custom Manufacturing. 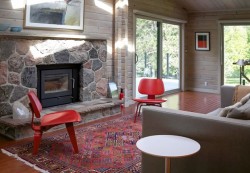 The fireplace heats the entire main floor in the winter months. Photo by Pam Purves.

The house now has large windows that flood the rooms with light and provide views of the surrounding woods and rolling lawns. Four skylights admit light from above. The dark-stained floors and stone of the fireplace provide passive solar heating during winter, and an enlarged entryway has added 195 square feet to the space.

A purely cosmetic change has also helped brighten the appearance of the house. The exterior is painted a mid-grey that, combined with the rain screens, completely transforms the look. The owners also painstakingly applied a pale grey stain to the interior log surfaces. The newly light and bright rooms have lost none of their original coziness, but they are more relaxing.

There are now three buildings on the property – the house, a garage/workshop, and a pool house. The large swimming pool is ingeniously and efficiently heated by a purpose-built wood-burning stove, part of a system developed and installed by Wood Stove Pools, located near Alton. When fed with good, dry hardwood, the stove heats the water at the rate of one degree an hour.

Despite all the help they received, the owners did most of the heavy work on the original building themselves. Learning as they went, they spent countless hours cutting through walls and drilling channels for wiring. One of them credits his surgical training with helping him work through the night when other deadlines were looming.

Labour and love went hand in hand in this renovation, and the owners have created a home of which they are justly proud. Always thinking about the environment they cherish, they are still brimming with ambitious plans that include installing a green roof on a section of the original building. Clearly, this is a labour that may never end. 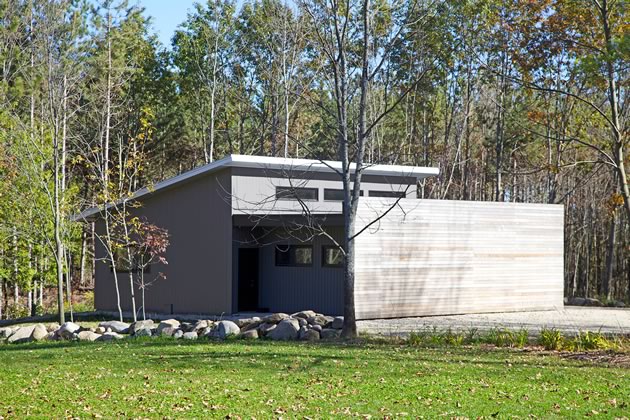 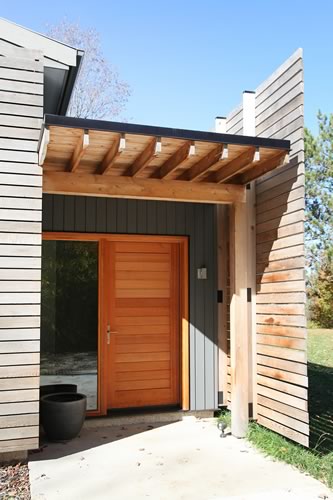 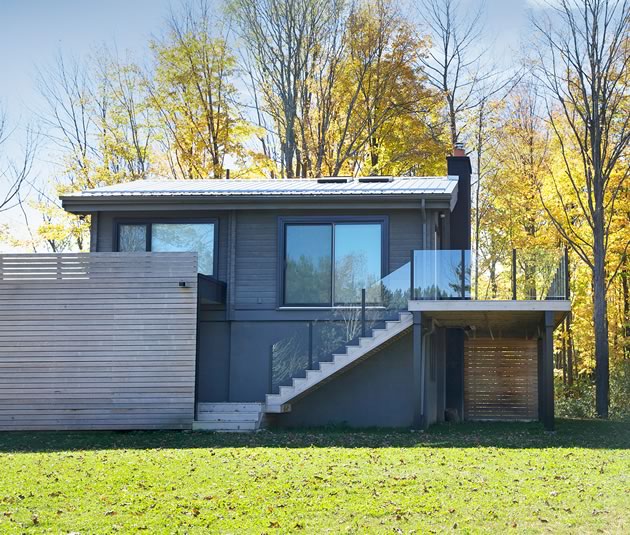 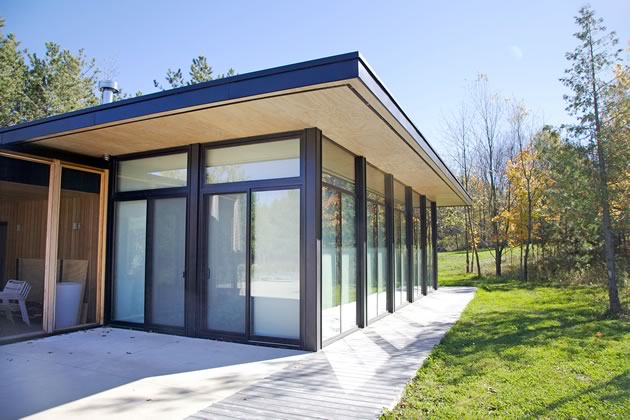 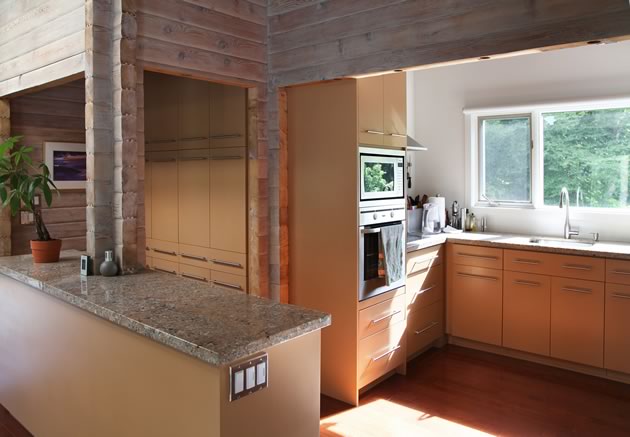 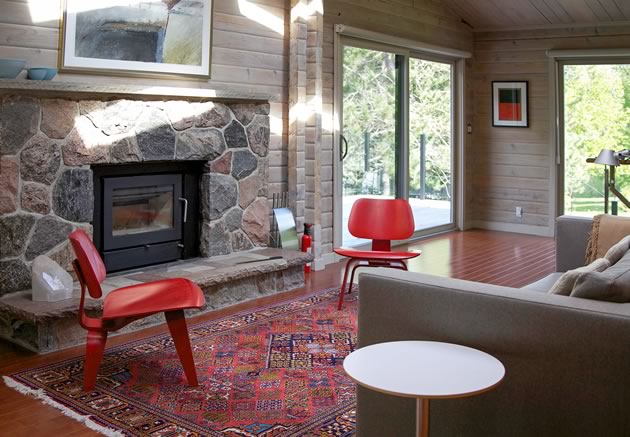 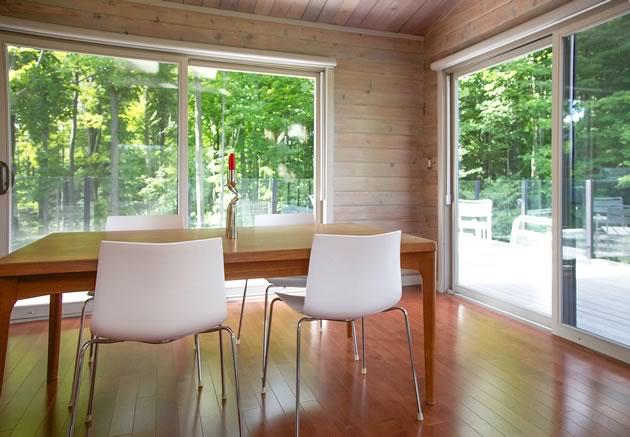 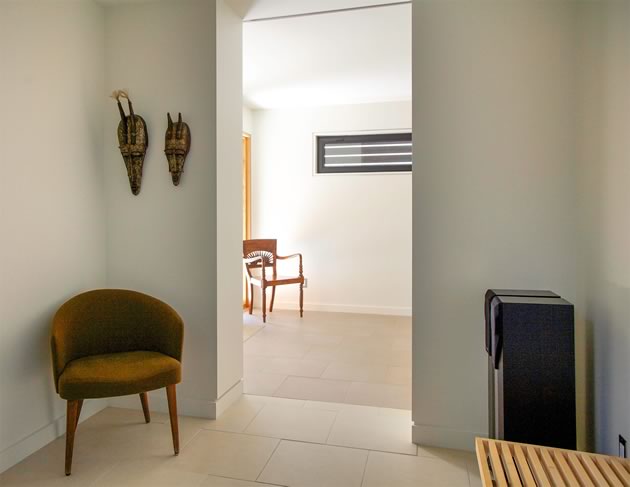 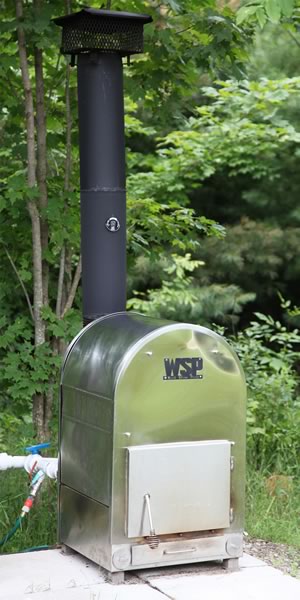 <
►
>
The screening at the south end of the garage protects the insulating membrane, and links the design to the house. Photo by Pam Purves.