Get Up and Dance!

The Dufferin Dance Network brings dance to people – and people to dance.

The Headwaters region is rich in the arts. Every sideroad and hamlet seems home to a potter, a painter, a singer, a musician, a thespian – each of them part of a local community of like-minded enthusiasts. Except dance. Dance, for some reason, tends to be the poor cousin of the arts. With no script, no score, no canvas, no lump of clay to anchor it, elusive dance is often billed as “also appearing” at jazz festivals, theatres and choral events.

But Dufferin Dance Network aims to change all that. The nonprofit group spearheaded by Catherine Carpenko is determined to raise the profile of dance on the Headwaters arts scene – to place it centre stage, so to speak.

DDN’s approach is two-pronged: to involve the community in dance and to involve dancers in the community. “We’re motivated to animate dance in our community for people of all ages, including families,” says Catherine.

As a first step toward achieving these goals, DDN recently teamed up with Orangeville’s parks and recreation department to present a series of monthly workshops designed to build interest in dance.

At the workshops, local dancers offer a one-hour lesson in a particular style and follow up with an hour of social dancing so that participants can try out what they’ve learned. Family oriented, pay-what-you-can and open to dancers of any ability, the first four workshops were well received. Forty people shook their booty at Michele Johnston’s salsa class, and 29 foot stompers hailing from Orangeville, Shelburne and Arthur joined line-dancing instructors Hope and Robert Young of Croc’s Country Kickers.

And then there was Catherine’s discomania workshop, bringing back memories of the disco classes she taught in the late 1970s and early ’80s in Orangeville, Erin and Shelburne.

In July, Ayrlie MacEachern led a workshop in Nia, short for “neuromuscular integrative action,” a sensory-based fusion of movements drawn from martial arts, dance and the healing arts. Two more workshops are still in the works, one at the end of September and the other at the end of October.

“This is to launch us and to help build some momentum to develop a broader interest in dance in the area,” says Catherine. “Surveys are being done of everyone who attends to find the needs of the community.” 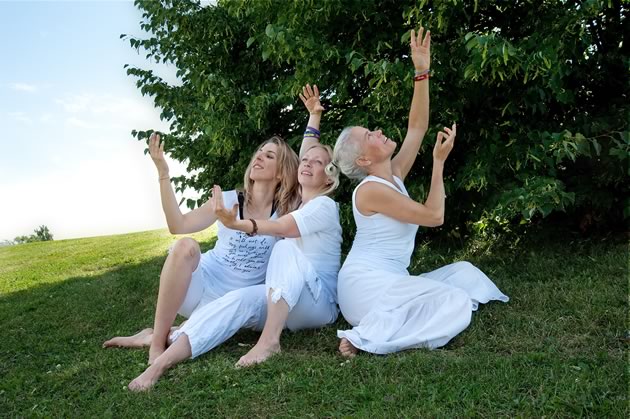 So far, the surveys have confirmed that the workshops are a hit, says Lisa Headley, recreational programmer for the Town of Orangeville. Comments from participants, who range in age from 9 to 90, have been enthusiastic and include requests for more and longer classes and workshops in 13 other dance forms. Clearly, there is pent-up demand for more dance. To meet it and expand the program, DDN is looking for volunteer teachers in various dance disciplines.

Catherine has been involved in dance and the arts all her life. She attended York University’s dance program before moving to Adjala in 1977. Soon after, she opened a dance and theatre school in Orangeville while designing and teaching dance programs for Georgian College and Dufferin’s board of education.

Involved in the startup of Theatre Orangeville, Catherine served for a time as the theatre’s choreographer and assistant artistic director. She now runs two arts retreats: one in Caledon and the other at her studio in Mulmur, where she now lives. She also returned to school to earn a master’s degree in education and psychology, and she works as a therapist in Orangeville and Toronto.

In 2001 Catherine joined the board of Dance Ontario, where her special interest is promoting dance in rural communities. But it was a 2012 Toronto conference called Connecting the Dots that really started the ball rolling.

Catherine invited some like-minded Orangeville-area residents to attend the conference with her. “It was really clear that there was an interest and potential in the community for us to have a network to advance dance in our own community,” she says.

And so DDN was born. The group held its first meeting in September 2012, and after receiving funds for specific initiatives from the Dufferin Arts Council and TD Bank Orangeville, as well as support from Dance Ontario, the current DDN board was formed: Catherine, as founder and liaison; Michele Johnston, dance instructor from Orangeville; Ayrlie MacEachern, Nia and kundalini yoga teacher and expressive arts therapist from Singhampton; Jennifer Damianidis, dance instructor from Orangeville; and Sarah Felschow, a professional dancer, choreographer and instructor from Mulmur.

Now, let me come clean about Sarah Felschow. I’ve known Sarah most of her life. She attended my dance studio in Stouffville from the time she was three until she left town to study dance at George Brown College. I was her teacher when she took her first faltering ballet steps and felt something akin to parental delight as she matured into a talented dancer.

Over our years together, we put in countless hours of blood, sweat and tears, and celebrated moments of joyful accomplishment – and these have formed an unbreakable bond between us. Since her time at George Brown, Sarah has danced professionally for 13 years with Motus O dance theatre and become a versatile teacher. So I jumped at the chance to reconnect with her.

Sarah’s desire to work with DDN illustrates why the network is needed. Living in Dufferin County and commuting back and forth to Motus O’s home base in Stouffville left her feeling artistically isolated here in these hills. “I aspired to have a dance community to relate to,” she says.

So she contacted local dance studios and taught at Orangeville’s Academy of Performing Arts for a time. Then her eye was caught by an In The Hills article on No. 369 Dance Collective, and she made other contacts. Eventually she met Catherine – and the plan that led to DDN was set in motion.

This past June, Sarah travelled with Motus O to Lewiston, New York, to stage an outdoor performance of Alice, the dance company’s version of Alice in Wonderland. After the performance, audience members – many dressed as characters from the story – were invited to wander the stage, look at the props and take photographs.

“Motus O has taught me the importance of interacting with the audience in a community,” Sarah says, recalling how the children were thrilled to be allowed to touch the wildly long pink eyelashes she wears in the show. “And there are lots of windows of opportunity for programs of this sort in our community as well.”

So outdoor dance programs have been added to DDN’s to-do list. And the ideas keep coming. Until mid-October DDN is collaborating with the Orangeville Farmers’ Market and three local restaurants – Soulyve Caribbean Kitchen, Coriander Kitchen and Euphoria – to stage events they have dubbed “Food ’n’ Motion.” At the market, dancers perform in a style related to each restaurant’s specialty.

Longer-range plans involve working with Dufferin County Museum & Archives to organize a dance festival that coincides with next January’s Dance Ontario conference. The Dufferin Dance Extravaganza will include workshops, performances and a special event. The dream is to make this an annual feature on DDN’s calendar.

“We plan events that we think will serve the community,” says Catherine. “Then we see if we have qualified people who can help, and if not, we go farther abroad for teachers or companies.”

At the DDN board’s monthly Skype meetings, ideas flow thick and fast. How about making dance a more prominent part of the Orangeville Blues and Jazz Festival? Or promoting dance for the enjoyment and well-being of the over-50 crowd? Or enlisting a street dancer to demonstrate moves to kids at the local skateboard park? Or a weekly social dance to bring the community together, in much the same way as the barn dances of bygone days? Or bringing “dusk dances” to the Headwaters region? And so the list grows.

DDN’s goal is to offer community dance events for everyone, regardless of age and ability. Whether people choose to play an active role or watch, these dedicated artists hope everyone will enjoy what they offer. But most of all they hope, as the saying goes, to get everyone dancing as if no one is watching.

Put on your dancin’ shoes

There’s still time to catch at least one of the DDN workshops organized in partnership with Orangeville’s parks and recreation department. Both workshops take place from 2 to 4 p.m. in the banquet hall at the Tony Rose Memorial Sports Centre.

And at the Orangeville Farmers’ Market on Saturday, October 18, you can enjoy the final Food ’n’ Motion event of the season. Ayrlie MacEachern will team up with Euphoria to demonstrate Nia (neuromuscular integrative action). 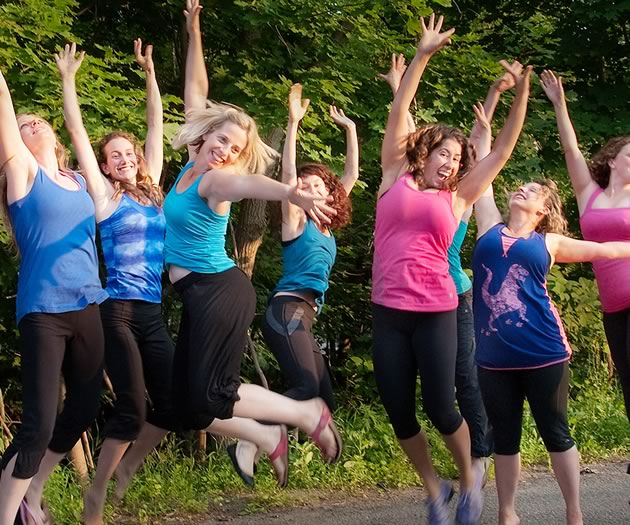 Former dancers rediscover the passion of their youth. 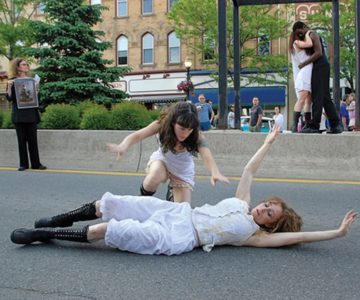 Dancing on the Edge

Michelle Grierson and Kerri-Ann Paradis Hutton use bold, contemporary dance to explore emotional and social boundaries. The result will be performed by a collective of young dancers this summer.