Dancing on the Edge

Michelle Grierson and Kerri-Ann Paradis Hutton use bold, contemporary dance to explore emotional and social boundaries. The result will be performed by a collective of young dancers this summer.

It is a poignant moment when teacher and student reunite after years apart. In 2008, when Kerri-Ann Paradis Hutton returned to her hometown and made contact with her dance teacher Michelle Grierson from Orangeville District Secondary School, the stars aligned and a creative partnership blossomed.

An excerpt from “Cinch,” by No. 9 Dance Collective, featuring Kerri-Ann Hutton Paradis and Michelle Grierson

Currently the two women are working with a group of eight young men and women with the goal of presenting an outdoor dance performance entitled Falling Dark in early July.

The dancers – some with previous experience and some without – auditioned in early April to become part of No. 6 Collective.

Through dance, meditation, mental imaging and energy work, the program aims to explore body imagery through improvisation, as well as to teach some solid dance techniques.

“We initially worked with the dancers to see what they would bring out, because the piece will be based on their expression,” says Kerri-Ann. “We just help them along and then we come together and create.”

By the third rehearsal they had settled on the imagery of sleep and dreams and the concept that dreams can jump from person to person. Character-building and choreographed movement round out the work. 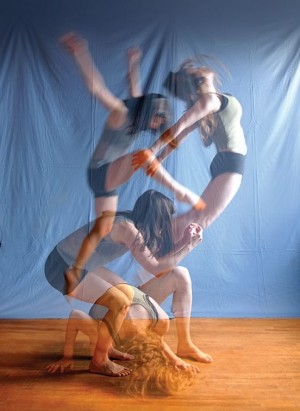 This is the second major project Kerri-Ann and Michelle have developed since Kerri-Ann’s return with her husband and young daughter after a decade in Toronto. “I just felt I had to be here for some reason – that something was going to happen in Orangeville,” Kerri-Ann, 32, says.

That “something” turned out to be the creation of a small company called No. 9 Collective and a performance, entitled ‘CINCH,’ at the Rosemont Hall last summer. The company of four dancers will be part of this summer’s performance with No. 6 Collective.

Michelle Grierson, 39, always had a soft spot for Kerri-Ann who was one of her Grade 11 dance students fifteen years ago in the newly formed ODSS dance program. After graduating, Kerri-Ann became Michelle’s first student to pursue dance professionally, receiving a coveted spot in Toronto Dance Theatre’s student training program. Al-though not an arts high school, ODSS boasts a solid arts program that includes visual arts, dance, music, film and drama with a good base of instructors.

“The statistic is that over 80 per cent of the stu-dents are taking arts training at some point, not just because of the one credit that is required,” Michelle says. She has been teaching contemporary dance to Grade 11 and 12 students since 1994. The program does not require an audition or previous formal training. For many years it was a “girls only” group, but recently more and more male students have joined in. This year there were seven young men in the Grade 11 program. Possibly, Michelle says, due to exposure to the phenomenal success of such TV programs as “So You Think You Can Dance.”

The ODSS dance program has matured over the years along with Michelle, who was only twenty-five when she returned to Orangeville with a Fine Arts degree from the University of Guelph. She began teaching visual art and the following year, after receiving dance qualifications through the University of Toronto, began the dance program.

“I teach a generic breath, spine, fall and recovery,” Michelle explains, “combined with a bit of [Martha] Graham, [José] Limón and some contact improvisation, so they receive exposure to various contemporary techniques.” Her interest in organic movement and authentic expression has led her to international study, most recently with a journey to Bali, Thailand and Cambodia to experience art and dance as a form of divine worship and meditation.

About half the dance students at ODSS are studio trained and half have no formal training when they begin the Grade 11 program, but they soon find that it is not technical expertise that Michelle is after.

“The idea is for them to find new ways to explore body awareness,” Michelle says, “and often the trained dancers find it just as difficult – or more difficult – to express themselves honestly and relate to one another.”

The continued success of the dance program is proof that Michelle is filling a gap in Orangeville’s dance community. “By the time they come to me they are getting frustrated with the lack of depth and meaning in their home studios. Teens need to feel that they have ownership over their work. They aren’t quite ready to choreograph their own show, but they are certainly ready to take a concept and interpret it into choreographic sequences.” Field trips to Toronto allow the students to experience cutting-edge dance performances that Michelle says “stretches their perspective in a useful and productive way.”

Michelle’s classes did just that for Kerri-Ann. She had taken dance classes for years as a child, but had not been introduced to contemporary dance before joining the ODSS program. Michelle encourages her students to explore difficult subjects and worked with that first group of young women to deal with social and emotional body issues.

“I threw myself into it and it was the most amazing experience for me,” Kerri-Ann recalls. “It was expression through movement that we had never experienced before.”

After reconnecting, Michelle and Kerri-Ann realized that their personal lives and interests outside the world of dance had also grown in parallel during their decade apart. Both had received training in physiology and healing in the arts and do ongoing work with special needs children in a therapeutic, dance-oriented environment. They have an interest in yoga and both are married and mothers of toddlers.

Kerri-Ann worked as director of a City of Toronto creative movement program and was lead dancer and choreographer for Famous People Players. She is also a child and youth worker and, for four years, has held a full-time job as a residence counsellor for the National Ballet School. Meanwhile, Michelle completed a Master’s program at ISIS Canada (International School for Interdisciplinary Studies), the country’s first integrated arts therapy training program, and for several years she has taught a specialized expressive arts program for special needs students at ODSS. 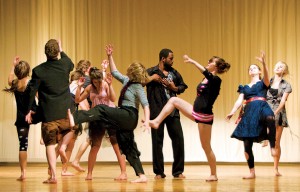 These experiences have coloured their choreographic bent. “We think and feel outside of the box of what’s expected and how we’re supposed to be-have as dancers, as women, as part of society. And we go places where maybe other people might feel uncomfortable,” Michelle says.

Forming No. 9 Collective and presenting ‘CINCH’ allowed them to delve into a subject that touched on sexual, physical and emotional abuse – work that they agree would not be appropriate in the school or dance studio settings where they teach. Along with Bronwyn Stanowski (a former student of both Michelle and Kerri-Ann) and Claude Dunkley, they created a haunting, thought-provoking piece that explored the repression of women in the 1800s.

During the 2009 Orangeville Blues & Jazz Festival they decided to do a guerrilla outdoor performance based on an improvisation of ‘CINCH’ material. They had not been hired as part of the festival program and some spectators did not know what to make of strawberry-eating dancers dressed in Victorian lingerie.

“We didn’t realize it was the night of the antique car rally and it was perhaps not the best crowd to perform to,” Michelle says with a shrug.

They consider ‘CINCH’ to have been a success despite having left a few uncomfortable audience members scratching their heads at the end of the performance.

“I like to see how a captive audience will react when they see a piece,” Michelle says. “Kerri-Ann and I both like to break the frame of the performance space to connect more directly with the audience.” They find that this is an interesting way to approach performance – not all the time perhaps – but in particular pieces.

All this might ruffle a few feathers in the still largely rural-conservative milieu of Orangeville. But Michelle’s and Kerri-Ann’s interests lie well out-side the more conventional smiling, sequined dance entertainers/competitors. Instead, they offer local audiences dance as an art form that is raw, emotional and often explosive. 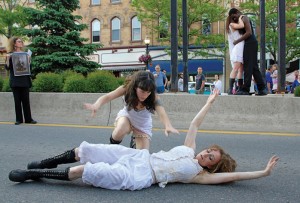 The No. 9 Collective: Michelle Grierson (foreground) and Kerri-Ann Hutton Paradis, along with Bronwyn Stanowski and Claude Dunkley (rear) performed a guerrilla dance improvisation to the surprise of strollers on Broadway during last year’s Blues & Jazz Festival in Orangeville. Photo by Bohdan Petryk.

They agree their approach does not always generate a positive reaction, but that is not necessarily their aim. Like intense drama, evocative music or unsettling art, the goal is to en-courage spectators to contemplate what they are seeing – and any reaction is better than no reaction.

With the experience of the No. 6 Collective’s summer program and performance, Michelle and Kerri-Ann have plans to expand the program, possibly applying for funding for an ongoing summer project that offers a variety of dance experiences, similar to Guelph’s dance festival.

“It’s a nice long-term goal to shoot for,” Michelle says. “I don’t know what is possible with the local studios, but it would be fun and not competitive – just a space and a form for groups to contribute work. Especially teens – they have so much to say through movement and rarely have the opportunity to create their own work.”

Michele Green is a freelance writer who lives near Belfountain.
Show 1 Comment