A Hymn to the Small Hall

The community hall is one of the very last places where we are allowed to get together and make something out of nothing, just for the fun of it.

In 1853, a group of elders met in the tiny community hall in our little village to discuss the growing problem of youth vandalism in the neighbourhood. Teenagers had far too much time on their hands during the long, dark winters and they needed diversion. The elders had the bright idea of forming a Literary and Debating Society.

At the first meeting of the Society, the membership debated the question of whether “the cow is superior to the horse.” The debate erupted in a fistfight, which turned into a riot, and the little hall was wrecked. The elders met again and this time they suggested the debating club be reconfigured as an agricultural society and urged the membership to put on a fall fair. Then they set about to build themselves a new town hall.

Duntroon has smashed up, burned down and worn out three halls in its history. The fourth one we have now is lasting better than the other three because building materials are improving and young people aren’t using it quite as hard as our ancestors did. But it still needs constant attention to keep it going.

The small hall is the centrepiece of many rural Canadian neighbourhoods today. Each one of them has a gatekeeper, the formidable Hall Committee Secretary, a whisky-voiced virago who has ruled the building since before anyone can remember and has never taken a dime in compensation.

Hall food is famously simple and rugged: grey roast beef, pale peas, mashed potatoes and pie. This is a tradition that goes back to our grandmothers and their grandmothers before them who knew that food was dangerous and could kill you. Food went into the oven to make it safe to eat. The longer it sat there, the safer it got. The only thing on the tables that didn’t have the bejeezus boiled out of it was the whipped Jell-O salad with the pink and green marshmallows.

The hall of my childhood was an Orange Lodge in the hamlet of Rosemont. I sang in choirs on that hall stage, performed in plays, learned to dance, had my first swig of rye in a stubby Coke bottle out in the parking lot, got kissed for the first time under the horse chestnut tree in front of the hall.

We had an amateur theatre troupe that performed at every Strawberry and Fowl Supper put on by the church ladies. The neighbours were a wonderful audience and they didn’t mind seeing us do the same play over and over again. One of them remembered riding horseback to the hall one winter during the Depression to perform his own small but memorable part in a play on that stage. He hoisted an axe on his shoulder, went to the door and announced, “I’m goin’ out to split some peas for the split pea soup!” That brought the house down, and he was called Split Pea Thompson for the next 50 years. 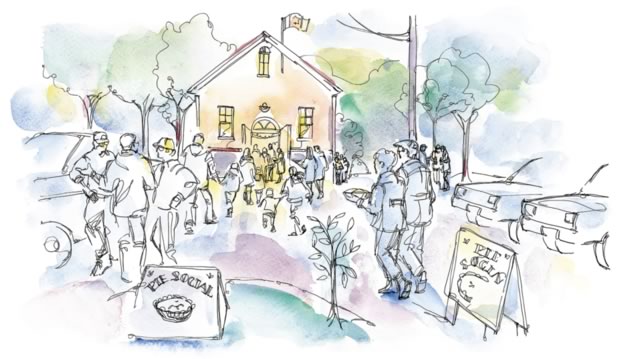 I consider myself fortunate to live in a neighbourhood that still knows how to do practical things like design a flying outhouse. Illustration by Shelagh Armstrong.

Life expectancy in North America has actually fallen down the world ranking over the last 50 years and psychologists tell us this is because we have become increasingly isolated by our phones and our screens and our stuff. We have lost sight of the fact that we are social animals and need to belong to a group.

Researchers have studied what happens when like-minded people take up a good cause and gather in overheated halls to raffle off pies and perform silly skits in front of the neighbours. They have found it makes them less anxious, boosts serotonin levels, increases energy and gives them greater resilience to stress – exactly the sort of effects associated with powerful antidepressant drugs.

I consider myself fortunate to live in a neighbourhood that still knows how to do useful and practical things like race chickens or design a flying outhouse. We listen to live music, put on plays, and we pile plates high with boiled Canadian food that nourishes the soul.

The community hall is one of the very last places where we are allowed to get together and make something out of nothing, just for the fun of it. It is a setting where real friendships are made, strong links are forged, and we are granted what poet Robert Frost once called “a momentary stay against confusion.”

Above all, they give us a wonderful sense of place.

Small Community Halls in the Hills