An abandoned stone church in Caledon is blessed with a second life. 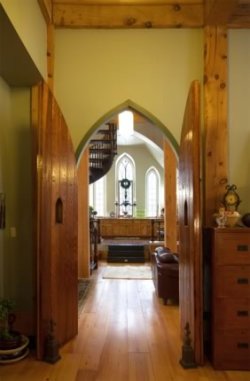 The church aisle now leads to a kitchen – divine in its own way. Photo by Pam Purves.

Many of those drawn to country living are also often attracted to the beautiful old stone houses so carefully crafted by early Ontario settlers and stonemasons. But these houses are too few and highly coveted, which means they are very expensive. And because they were built in an age when heating was room by room and labour intensive, they also tend to be small. For contemporary homebuyers, this usually requires extra expenses for additions and knocking down interior walls.

Lena Lemieux began her search for a stone house in the mid-1990s, but those she saw either lay in ruins or had long since been renovated and restored. In both cases they were out of her financial reach.

But serendipity has a way of intervening in home hunts, and Lena’s search was no different. By complete fluke she stumbled across an abandoned stone church in one of Caledon’s hamlets. The location wasn’t what she had envisioned, but the church was beautiful and under threat of demolition. Deconsecrated three years earlier, the building had been up for sale ever since and was deteriorating.

Young, naïve and undaunted, Lena had the building inspected and was told it was salvageable. At a price of $67,000, the deal for the building and the surrounding quarter acre seemed too good to pass up.

Lena’s first step was to apply to the Town of Caledon to have the church designated a heritage building so it could never again be threatened with destruction. During this process, she learned that her future home was probably the only limestone church in the Caledon area.

Then reality set in. To make the building a home, it needed a new roof, windows, insulation, wiring, plumbing, a kitchen, a bedroom … With a team of family and friends, Lena began the work by stripping the building to its stone walls. Two false ceilings were pulled down, and two oil burners and a coal burner were removed. The gutting took a year and a half.

During the demolition, the team made an “archeological discovery.” Original stencils of Church of England symbols remained on one of the walls. Lena has preserved the plaster in this area and hopes it will serve as a model for future stencilling on the new walls.

A major task involved replacing the original stained-glass windows. Along with the pews they had been removed earlier for use in another church. Martin Windows and Doors, a small, family-run Quebec company, designed and built handsome new windows and installed them within a year. More recently, Todd White of Pine Ridge Contracting replaced the rose window that graces the gable above the main entrance. 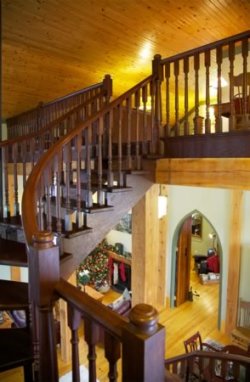 The master bedroom in the loft sits right under the eaves. Photo by Pam Purves.

With the windows in place, the team inserted an internal skeleton of fir beams crafted by John Post of Post Farm Structures. These beams, which increased the strength of the original stone building, support the second-storey loft bedroom and a staircase.

Five years and about $100,000 later, what had started as “a little jewel” of a church became a little jewel of a home. In fact, over those five years, which involved serious blood, sweat and tears, as well as despair and injuries, Lena had to keep reminding herself, “It’s a little jewel. It’s a little jewel.” And it is entirely likely that the building’s ghostly sanctity was disturbed by the oaths muttered during construction.

The advantage of a church over a stone house was the scale of the interior spaces. Ideal for open-concept modern living, the central part of the building is one large open space that once housed a raised chancel, which accommodated the altar and the choir, and the nave where the congregation gathered. Sixteen-foot ceilings add to the sense of space.

The former chancel is now the kitchen, while the living and dining areas occupy much of what was the nave.

When Lena first moved in, the transformation from church to home was far from complete. To reach the loft bedroom, she climbed a 20-foot ladder. And though the bathrooms and kitchen were in working order, she knew she would be living in a construction site for a few more years.

Her intent was to maintain the visual integrity of the church while converting the space into an efficient and comfortable residence. She spent much time sourcing fixtures and Victorian pieces to suit a building erected in 1867. Identical milk glass church fixtures were found in very different locations: one in Quebec and one online. And searching out furnishings of the right scale for the unusual space was a time-consuming but enjoyable challenge. An oversized Irish armoire, for example, was discovered in the Niagara area.

A large and whimsical iron light fixture hangs in the kitchen. Fuelled by oil and attached to a winch so it can be raised and lowered for lighting, it sheds a lovely, soft, flickering light throughout the main space.

A dominant feature of the central room is an impressive oak staircase that winds up to the master bedroom and bathrooms. The design was inspired by a set of oak rails Lena picked up when the old Tip Top Tailors building in Toronto was being gutted for redevelopment. Railmaster Stairways of Guelph duplicated the rail motif in the stair design and used the heritage pieces as a railing to separate the kitchen from the living-dining space.

As in many old churches, congregants entered through double oak doors. The neo-Gothic doors were weathering badly and needed constant refinishing, so Lena decided to move them into the vestibule to separate the living area from a space that now accommodates a small bedroom and office.

This means the main entrance is now recessed, creating a charming covered area – very European in feel. And the original doorway is marked by a set of iron gates, built and designed by local iron worker Pat Flick to mimic Gothic-style church fencing.

The result of Lena’s hard work is a small masterpiece of re-imagining. The home is warm and atmospheric, a place ideally suited for snow and Christmas and the smell of baking. It has provided great joy to Lena – and to her neighbours, who often drop by to reminisce about when they attended services there. All are thankful the building was saved and has achieved a second, possibly eternal, life. 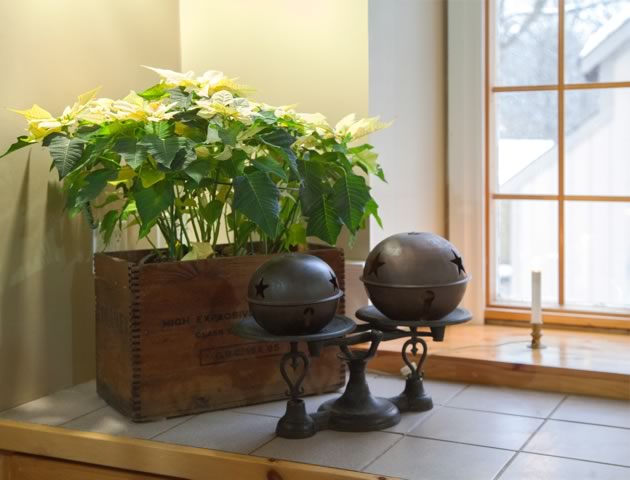 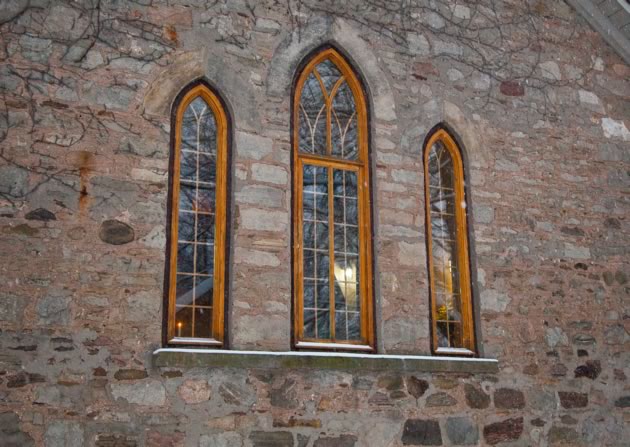 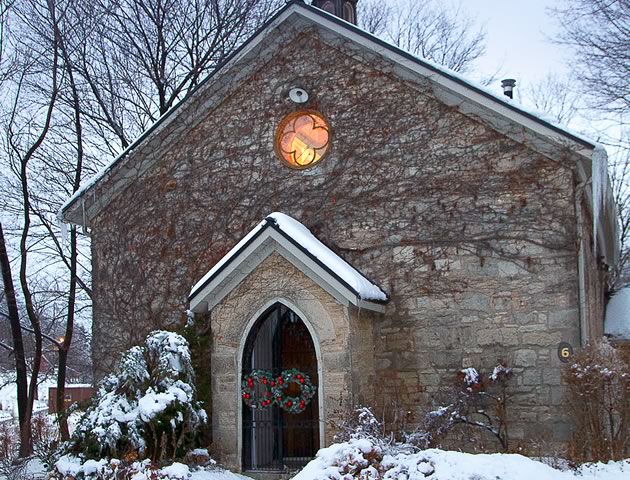 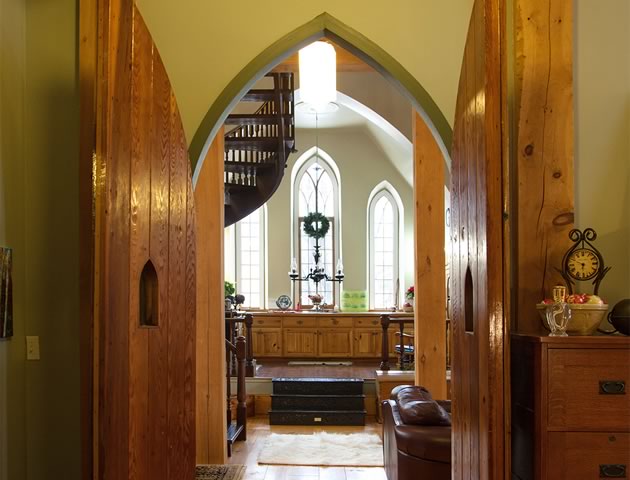 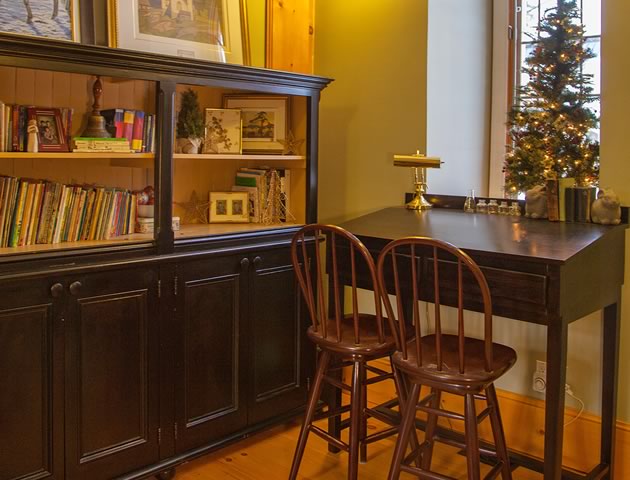 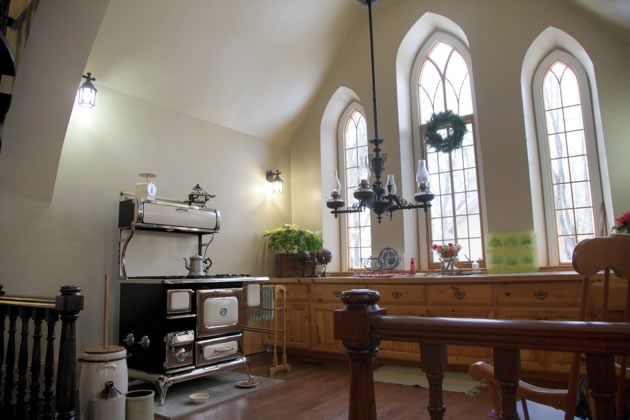 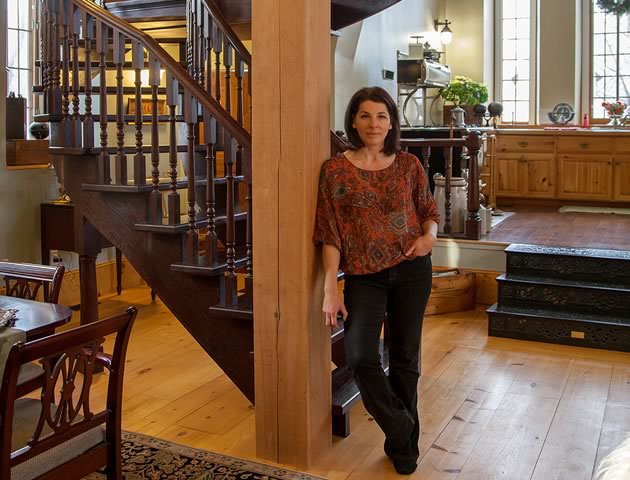 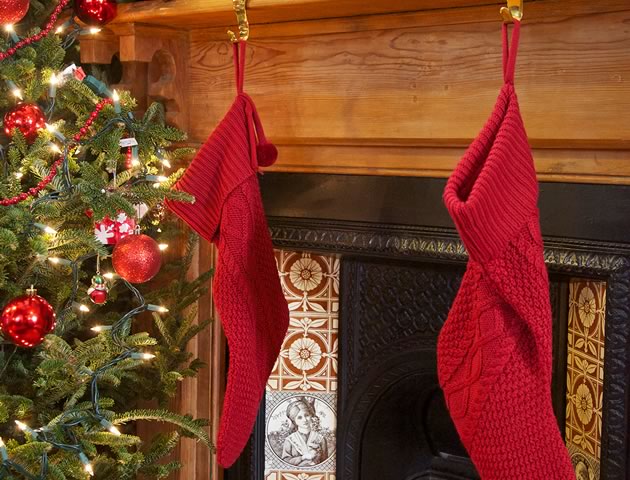 <
►
>
The magnificent windows were custommade to fit the Gothic stone frames by a small Quebec company. Photo by Pam Purves.