Nineteen years ago, Erin resident Chricket Yule didn’t exactly set out to create a long-term recreational program for kids with special needs, let alone one that has galvanized her community and sparked lifelong friendships.

Chricket Yule: One of our 2014 Local Heroes

Chricket was first inspired to improve the lot of one particular teenager, the daughter of a close friend. Barb Perkins confided in Chricket that her teen daughter, Becky, was aware enough to recognize that she was missing out on the hang-outs and sleepovers her peers enjoyed.

“We just thought, wouldn’t it be great to start a friendship circle for Becky?” Chricket recalls. She and Barb knew of three similar teens in the area and together they cooked up a six-week program of activities overseen by qualified caregivers.

“It was pretty evident from the smiles on their faces how much they thoroughly loved being together,” Chricket says. “It was just for them. They were able to pick up on that.”

Fast-forward almost two decades and the “Special Friends of St. Andrew’s” (the group uses the Hillsburgh Presbyterian church’s basement and kitchen) is a year-round fixture in the community, supported by the local Optimist, Rotary and Lions service clubs, by individuals who drop coins into cans at area businesses, and by innumerable bake sales and car washes.

Special Friends now comprises a Saturday drop-in program and a summer day camp. The program also serves as a respite for parents and caregivers. Activities include pyjama parties, hikes, Christmas parties, field trips to Blue Jays games – even a limo ride after one participant noted he would likely never get to experience one.

To illustrate the program’s impact, Chricket recalls a parent telling her that a pyjama party was their child’s best day ever because “he’d never had a sleepover. He’d never been in his pyjamas watching a movie with his friends. That has always stuck with me.”

Becky moved away a few years after the group was formed, and Chricket, a retired teacher who is a “shade over 60,” has co-ordinated the program ever since. Membership is fairly constant, as participants don’t “age out” of the program. The 11 current members are from 18 to 53 years old. Their challenges include developmental delays, autism and Down Syndrome, but they are “high-functioning,” says Chricket. 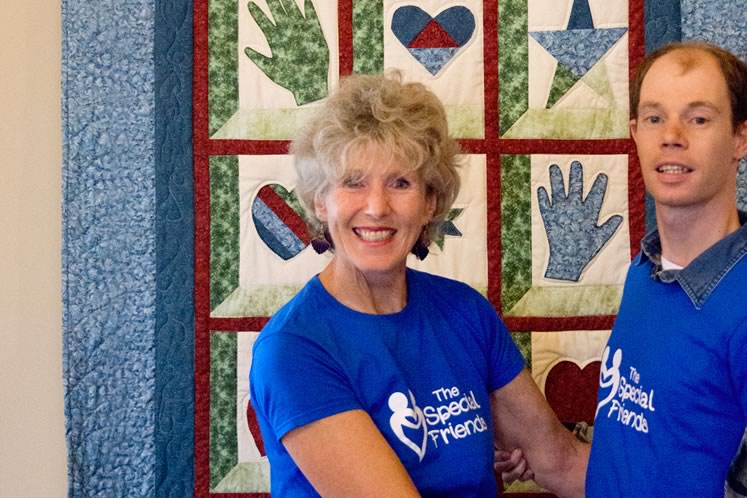 To see Chricket in action, trying to pose for a photo with Scott McDougall (who has been a Special Friend from the start) is to glimpse her devotion.

Scott, now 33, has developmental delays and is nonverbal. He is also bright eyed and fleet footed, not much interested in sitting still for the camera. Chricket knows how to communicate with him, holding his hands in hers, her voice upbeat and respectful. At the same time, she cheerfully tells the photographer that Scott alone will determine how much time there is to snap a shot.

This ability to take a backseat appears to be a trademark. In conversation she is sure to thank her husband, Mac, and their three adult children. She is quick to shift the spotlight to the staff, St. Andrew’s, the service clubs and the community.

“I just plan it from my kitchen table,” she says.