Imagine a tutu-clad hippopotamus carrying a flowered parasol pedalling around a circus ring. Now picture the bicycle on which she teeters. If a colourful two-wheeler with fat, perhaps white, knobby tires comes to mind, then you’ve conjured up a pretty good image of what’s firing the latest trend in mountain biking circles. Fat-tired bikes look ridiculous, but their popularity is rising as fast as a magician can slip a card up his sleeve.

Hardcore cyclists unhappy about hanging up their bikes when the snow flies are behind this phenomenon. They’ve discovered that the combination of four-inch-wide tires, which are about twice the width of mountain bike tires, and very low tire pressure – about 8 psi compared with 30 psi for a mountain bike – allows fat bikes to roll over the white stuff. Add metal studs and you have traction, even on ice.

The first fatty models built to handle these extra-wide tires rolled off the assembly lines of two American boutique manufacturers more than five years ago. Tyler Hollema, who lives in Rosemont and is now riding his fatty for a third season, was an early adopter. 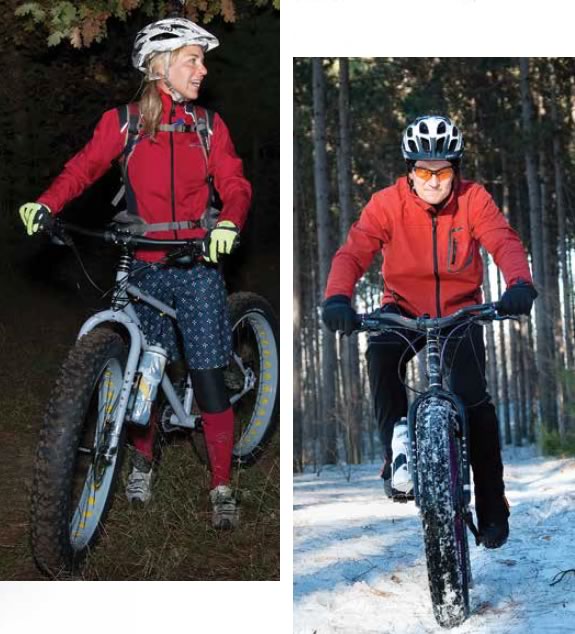 “It came about as sort of a contest between Johnny [Yeaman] and me,” Hollema said. “We always wanted to be the last one to hang up our mountain bike for the year and my fatty let me do that.” Tyler loves having the option of riding all winter, though he misses the nimbleness of his mountain bike. “But if I could get a lighter fat bike with suspension, maybe I’d switch,” he said.

A few pricey new models offer suspensions similar to those of mountain bikes, and their weight has dropped from more than 40 pounds (about 20 kg) to as low as 21 pounds (about 10 kg), but the only cushioning on most fat bikes comes from the squishy tires. These shortcomings might change quickly now that Specialized and other mainstream bicycle manufacturers are producing their own models. They’re aware that what looked like an activity limited to a handful of cyclists crazy enough to spend upwards of $1,200 to get out on the trails when it’s 20 or more degrees below zero could become a mainstream market.

Rosemary Hasner, who took the photos on this page, is so keen on her fatty that she insisted I had to write about this new trend – now. “You are going to love it,” she said, assuring me that after one time out I’d be hooked. Of course, she didn’t know that my road bike had left the shed only twice in the past two years and the last time I’d been on a mountain bike was three years ago, when I’d come away from the experience with a dislocated finger.

So on an overcast day in early October, I was invited to join Team Van Go for their regular Wednesday evening ride. I showed up at Dufferin County Forest just north of Mansfield to find more than a dozen cycling enthusiasts zipping around on their new fat-tired toys. The resplendent autumn orange and red maples were no competition for the brightly coloured bicycle frames and similarly toned “accessories.” 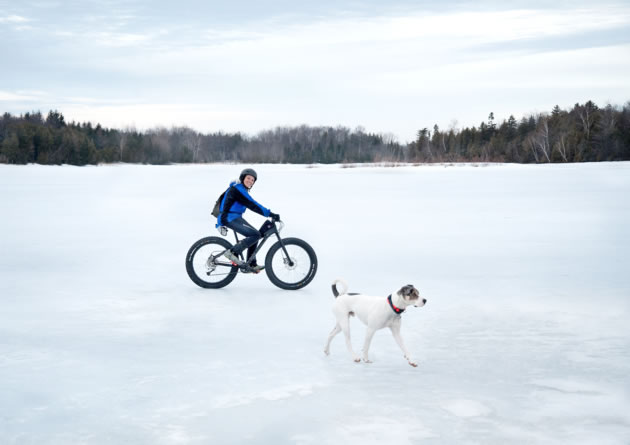 Fat bike enthusiast Rosemary Hasner takes a spin on the frozen ice of Island Lake with her dog Jackson. Photo by Janet Eagleson.

With minimal ado, we set out along a trail carpeted with leaves. Nice, I thought. But almost immediately, Johnny Yeaman, Team Van Go’s leader, deked into the forest – and so began a mad dash along a sinuous narrow track between handlebar-catching maple trees.

When I came to the first of many tree roots that criss-crossed the path, I stiffened. These obstacles look innocent, but often cause the wheels on mountain bikes to slide out from under you. Much to my surprise, my “summer” fat tires, with no metal studs, held as they passed over the slimy roots. They held the next time too, and the next. When I crossed a bridge-like structure made of small logs, I didn’t lose traction, and when I pedalled hard up a hill, my fat tires stuck to the trail, making the climb easier. Hmm, I thought, I can see why this sport is gaining momentum as a year-round activity.

Emily Gibson gets out most Wednesday nights with Team Van Go, but this was her first time on her new fatty. Unlike her partner, Tyler, Emily is cautious on a mountain bike. “I don’t like going downhill or skidding – skidding makes me stiffen up,” she said. Her experience that night mirrored my own. “I went over stuff that would normally have intimidated me,” she said.

Emily’s decision to invest in a fatty to boost her confidence seemed to be paying dividends, and she proudly showed off her intensely red Salsa Mukluk, a smart-looking 2013 demo that cost $1,300. She has spruced it up by adding purple brake cables, handlebars and seat post.

Recognizing that it’s hard to look cool while astride a bicycle fit for the Ringling Bros. circus, fat-bike enthusiasts enjoy playing up their gawkiness. Karen Yeaman, who is both an accomplished cyclist and Team Van Go’s fashionista, was also debuting her fatty that night. Made by Surly, her bike is steely grey. She has added yellow cable clips and threaded a yellow ribbon through her “drilled-out” tire rims, giving them an eye-catching checkerboard appearance. “I’ve ordered white tires,” she said.

Over time, I think that fat tires would help me, like Emily, gain a level of confidence that has been missing the few times I’ve negotiated a twisting single-track trail on a mountain bike. Speeding around the forest with Team Van Go was enjoyable, and having the option of another outdoor winter sport appeals to the Canadian in me. I might even catch on to cycling in the dark, though that’s another story. But what really won me over was thinking about the fun I’d have decking out a fatty. Beaded spokes and handlebar tassels, anyone?

Team Van Go’s Wednesday rides continue all winter. For news about these and other rides, visit teamvango.ca.