In its few short years, Big Life has established itself as an important anti-poaching leader in East Africa. 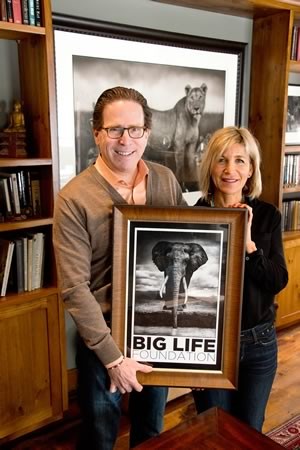 Greg Gubitz and Elise Solway in Caledon. The elephant in the Big Life logo photo by Nick Brandt is Igor, age 49, killed by poachers in 2009. Photo by Pete Paterson.

Over the past two years countries around the world have been waking up to the fact that the slaughter of elephants for their ivory tusks is rapidly threatening to drive the world’s largest land mammals to extinction. As a result, the U.S., France, Hong Kong, the Philippines and other countries have crushed tons of illegal ivory so that it cannot be sold on the black market.

That is sweet news to Caledon couple Greg Gubitz and Elise Solway. Greg is chairman of Big Life Foundation Canada and Elise an active volunteer, which puts them on the front lines of the struggle to stop the slaughter at its source.

Working on the ground in Kenya and Tanzania, the nonprofit organization collaborates closely with people in local communities, other NGOs, national parks and government agencies to protect and sustain wildlands and wildlife, including one of the largest populations of elephants remaining in East Africa. Trade in ivory was banned internationally in 1989. However, the worldwide supply of tusks stockpiled before the ban was acquired by the Chinese and Japanese governments and, particularly in China with its rapidly burgeoning middle class, the demand for ivory took off.

Although China has also crushed illegal ivory, Greg and others worry the move is more show than commitment. The government-owned factories control the supply, while the volume of ivory products available on the international market far exceeds that which the original stockpiles of so-called “legal” ivory could support.

Considering a pair of large tusks can fetch as much as $500,000 on the street in China, it’s no wonder the black market for ivory is booming and organized crime syndicates have muscled in on the action. As well, elephants are increasingly targeted by rebel militia organizations which use the pillaged ivory to fund their wars.

In 2012, an estimated 35,000 elephants were illegally killed (about 10 per cent of the entire African elephant population), largely by poachers cashing in on the ivory market. At that decimation rate, experts predict elephants will be extinct in Africa in as little as 12 to 15 years.

To make matters worse, local African wildlife protection groups are chronically underfunded and poorly equipped for the battle. And it’s not just elephants at risk. As the demand for animal parts continues to grow, primarily from the Far East, lions, rhinos and cheetahs are also threatened with extinction.

Greg’s Caledon office is warm and charming, a reflection of the man who sits behind the desk talking about his passion. A former lawyer, businessman and venture capitalist, Greg now volunteers a significant part of his workweek to Big Life Canada, creating awareness and raising funds to save the dangerously dwindling wildlife populations in Kenya and Tanzania. And he says he has never done anything quite so rewarding in his entire business career.

The two organizations work together in a highly co-ordinated fashion toward the common goal of protecting wildlife in the sensitive Amboseli-Tsavo ecosystem.

It’s a daunting task. The area under protection covers over two million acres.

Nevertheless, in its few short years, Big Life has established itself as an important anti-poaching leader in East Africa. It has in its employ 315 rangers across the two countries of Kenya and Tanzania, making it the largest employer in the core region of its operations.

It has set up 31 ranger outposts, and bought and equipped 15 anti-poaching vehicles. It uses aerial support for monitoring in both countries, night-vision equipment to search for cooking fires, GPS devices, video cameras with motion sensors, and regularly plugs into its large network of informers and connections. Four trained tracking dogs are invaluable assets. 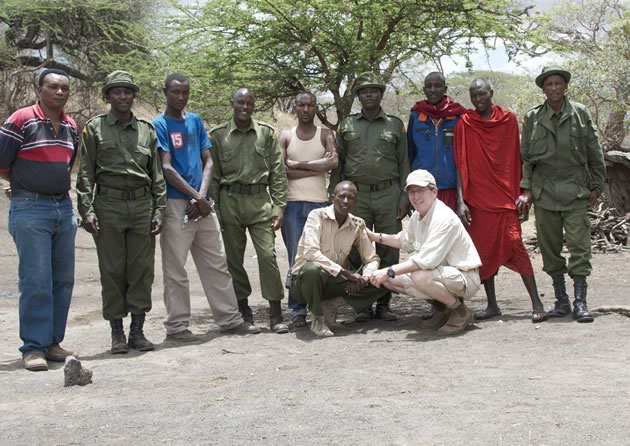 Greg with some of the Big Life rangers and community members who are working together to eliminate elephant poaching. Photo courtesy Greg Gubitz.

Since its inception, Big Life has made more than 1,600 poaching-related arrests and seized more than 3,000 poaching weapons.

Two things have led to these results: the skill of the Big Life teams on the ground and the co-operation of local communities incensed by the poaching taking place in their area.

Greg reads a report from the field written by Richard Bonham:

“The crack of a heavy rifle, designed specifically to kill elephants, is unmistakable. It’s a little like a sonic boom, a crash followed by a roll of sound not unlike thunder.

“This is what the Big Life rangers, manning an observation point on the Tanzania border, heard late one Sunday afternoon. Three shots in quick succession.

“The radio network burst into life as the rangers called for support from Kenya Wildlife Service and other Big Life teams in the area. In less than 90 minutes, teams were scouring the area, but soon ran out of daylight.

“The search renewed at sunrise. After an hour and a half of fruitless searching, the trackers received news that a fresh tusk, still covered in blood, had been found on the poachers’ tracks. The follow-up team split up, some continuing with the poachers’ tracks, others backtracking to find the carcasses.

“At midday the gut-wrenching news arrived. Three dead elephants had been found, their faces hacked away, their ivory gone.”

“Murder for profit,” mutters Greg, as he resumes our conversation in his Caledon office.

“The real problem is the insatiable demand for ivory, primarily from the emerging middle class in China and other Asian countries. Carved ivory has become a status symbol, and there are assembly line factories in China carving tusks into all manner of trinkets and ornaments.”

He then adds grimly, “People don’t seem to equate these objects with the life of a magnificent animal. Ivory is not a status symbol. In reality, it is a symbol of shame and ignorance.”

Rangers employed by Big Life are recruited from local communities, instilling a sense of pride, commitment and devotion to the protection of local wildlife that extends not only to the rangers themselves, but also to their mothers and fathers, wives, children and extended families. Often it’s these connections who supply valuable information as to the identities of suspected poachers or suspicious activities in an area.

And some of the men who now wear the Big Life ranger uniform with pride are former poachers themselves. They have been caught, served their time and decided that the promise of a regular paycheque is a better way to live than the dangerous, uncertain and socially unacceptable life of a poacher.

Big Life Foundation also supports programs designed to encourage conservation and education in local communities. In a culture where it is not unheard of for families to sell their last cow in order to finance an education for their child, the Big Life Education and Wildlife Scholarship Program has been well received by local communities, sponsoring over 200 students’ primary, secondary and tertiary education. These students often return to their home communities to provide leadership and much needed skills and services.

Another program, the Predator Compensation Fund, was designed and developed in close collaboration with the local Maasai community. The fund acts as an umbrella of protection for persecuted species such as lions, hyenas, leopards, wild dogs and jackals that are viewed by livestock owners as dangerous.

Retaliatory killing for livestock predation is a major threat to Africa’s lion population. The goal is to replace conflict and retaliation with tolerance and cohabitation. The compensation fund pays farmers 50 per cent of the value of predator-killed livestock, but only after 90 days if they, or anyone else in the community, have not killed a predator. 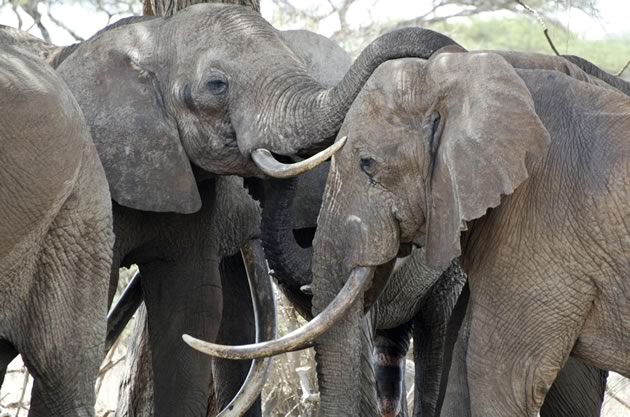 At the current decimation rate, experts predict elephants will be extinct in Africa in as little as 12 to 15 years. Photo courtesy Greg Gubitz.

“We believe it is the most effective conservation strategy in Africa,” says Greg, noting that a community that killed 22 lions just 18 months prior to the introduction of the project is now routinely protecting them. In the last quarter of 2014, he says, no lions were killed in the region of the project, and the Amboseli lion population, which numbered a mere handful a few years ago, has grown to about 200.

The Maasai Olympics, a sports competition based on traditional warrior skills, is another Big Life initiative. First held in 2012 it is hoped that through sport, a shift in the Maasai attitude can be engineered to promote a broader commitment to wildlife and habitat conservation as a preferred way of life in the 21st century.

However, a downside to the success of Big Life’s anti-poaching initiatives within the Amboseli-Tsavo region is that it is causing pressure on surrounding areas. The poachers are moving farther afield.

To avert further devastation just outside the range of its protection, Big Life has established an elite rapid-response mobile team to cover areas identified as high risk over an additional 500,000 acres.

These teams, composed of the best rangers, set up camp at a different location each night. Their potential presence is a strong deterrent to poachers on foot.

Greg was first drawn to elephant conservation when he went on a photo safari a few years ago and now returns at least once or twice a year. While other countries are taking action to crush ivory and announce zero-tolerance measures to halt the ivory trade, he bemoans the fact that Canada has remained silent on the issue.

“Elephants are highly developed and live in family units,” he says. “They have feelings. They take care of each other. They know suffering and mourn their dead. They are killed for trinkets, their tusks hacked out and their carcasses left to rot. I do not want to be part of a generation that sees these gentle giants wiped off the face of the earth.”