The Art & Therapy of Storytelling 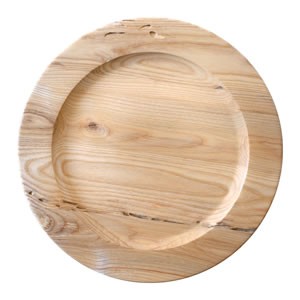 Just as every person has a story to tell, so does every piece of wood, says Jim Lorriman, a wood turner whose gift is bringing those stories to life. Using found wood – flooring, window frames, dock planks and the like, much of it of sentimental value – his goal is to both preserve history and reinterpret it as art. And he’ll often write a brief history of the wood’s provenance on the underside of the piece. It’s the stories that make each piece unique, he says.

So when the Mulmur artist was approached to contribute a piece of his work to Wellies to Wishes, the annual fundraising auction for Dufferin Child and Family Services, he agreed – with a proviso. Like many artists, Jim is frequently asked to contribute work to local charities. He frequently does, but feels that artists’ efforts are often undervalued. So this time he said he wanted to create something that was meaningful to the cause. That connection is important to his inspiration as an artist, he says. Moreover, its relevance to the charity means it will likely fetch a higher price at auction.

He first asked to be supplied with wood that had a story, but DCAFS staff expanded on the idea – to also tell the story of the people they help. After all, helping people is the purpose of both the organization and the event. Money raised at Wellies to Wishes goes toward additional support for the families DCAFS serves. Such support may include funding toward post-secondary education or other skills training, sponsoring recreational or creative activities, purchasing medical supplies, and providing respite for families who need a break from caregiving.

A couple from Port Elgin, Anne Judd and Doug Hamm, heard about the fundraiser and donated two pieces of wood – one light ash and one dark walnut – for Jim to create two large plates. The wood originated on land they had cleared for their home in 1994 using sustainable harvesting and work horses – no machinery was allowed in their forest.

Hailey Harrigan and Robin Blakely, two members of Shed the Light, shared their stories for the plates. Shed the Light is a youth-led group at DCAFS focused on reducing the stigma surrounding mental health through education. Hailey, Robin and other members of the group tell their personal stories to young people at local elementary and high schools, colleges and community events, making 30 or more presentations a year. In that way they hope to spread the word to other youth with mental health issues that they are not alone in their suffering.

The group began in 2009 through the efforts of a high school student who wanted to bring mental health into the light of day. With the help of a grant, she pulled together a group of students who were willing to talk to others about their personal struggles. Together they designed a logo, website and T-shirts.

The group has grown to eight kids – the largest yet – including two boys. It’s a socially diverse group, so every kid in the audience can probably relate to one or more of the members.

Hailey has been with the group since its inception. As a child, she remembers feeling different, alone and “weird.” When she was ten, she was diagnosed with attention deficit/hyperactivity disorder (adhd). The label explained her impulsiveness and difficulty with concentration, but didn’t help with her self-image or anxiety.

She joined Shed the Light for the same reasons others do – to gain an understanding of who she is and where she is at. “Some of them may not be in a good place when they start,” she says. Speaking to others about her challenges felt empowering and developed her self-confidence. It helped her get over her fears and believe in herself. 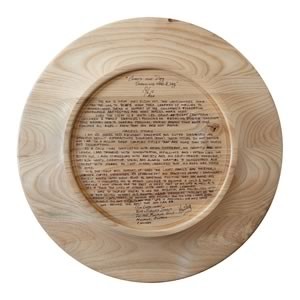 Jim Lorriman’s plates will be auctioned at Wellies to Wishes on April 18. Click to read the story. Photo by Rosemary Hasner / Black Dog Creative Arts.

Inspired by Hailey’s story, Jim Lorriman’s ash platter is titled “Comes the Day, Showing the Way.” It’s symbolic of the way Shed the Light showed her the way to accept the differences that make her unique, and how she now shows the way to others. The platter includes some visible wormholes. Jim explains he could have hidden them, but they are like the pitfalls in our paths – we need to see them to avoid them. Like Hailey’s healed scars, they are also part of the platter’s beauty.

On the reverse of the platter, Jim has transcribed Hailey’s story. It reads in part, “I am 20 years old. A student, daughter and sister diagnosed with attention deficit/hyperactivity disorder. These titles do not define who I am. I’m a million deep complex titles that are more than just words and descriptions.”

Robin was one of the teens who wasn’t in a good place when she joined Shed the Light. She had battled anxiety her whole life, but nobody realized what it was. “They just thought I was a neurotic kid,” she says. She was bullied at school and her home life was difficult. She suffered severe panic attacks and acted out in fear. As a result, she was suspended from school several times before the problem was diagnosed – nearly too late.

The day before her 16th birthday, she found out a friend had died. She blacked out and woke up in hospital. That night, she tried to end her own life.

Fortunately, she didn’t succeed. During her month-long stay in the hospital, she began to receive the help she needed, learning coping strategies and gaining an understanding of her mental health.

Robin’s story is now one of recovery. She says that after treatment she started seeing the world in a completely new light. She could see beauty she had never noticed before because she had been so focused on the negative. “I never thought I’d get to this point,” she says. “I found hope in the stories I heard from the Shed the Light kids, and hope in the stories of the youth who approached us [at the presentations].” She says that by sharing her story to help others, she has also helped herself.

“All these terrible things brought us [the Shed the Light kids] together,” Robin says. “But we’re there for each other, and that’s a beautiful thing.” The walnut platter that tells her story is aptly titled “Comes the Night, Stars Shining Bright.” Jim wanted to capture the beauty of the night shining through – not the dark and scary parts that Robin has come through, but the beauty – the stars and the light – she has found in it.

On the reverse of the plate, Robin’s story concludes, “Now, I strive for my courage to triumph over fear and I love and care for as many people as my heart will let me. I know I will be okay.”

“It’s been an incredible journey seeing them grow through their passion for helping,” says Tina Pryce, Shed the Light’s adult ally and co-ordinator, referring not only to Hailey and Robin, but all the teens in the group.

With the idea of spotlighting the artists’ special contribution to Wellies to Wishes, organizers invited only two other artists to contribute to the auction. (The name originated with the first fundraiser, which featured the sale of artfully painted Wellington boots, and many attendees still sport wellies with their eveningwear.) 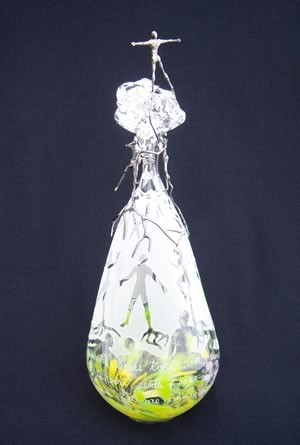 Kathryn Thomson, a seasoned glass blower from Amaranth, symbolically captures the journey to health with a vase that features figures climbing a tree, then reaching to the sky and freedom. The design of the sculptural piece, titled “Take Flight,” incorporates sandblasting and patinaed copper. It is inscribed with a poem Kathryn wrote to capture the theme.

Take Flight
Plant my feet like seeds in the ground.
Seeds take root; then skyward I am bound.
Hand over hand, heart to heart,
seeds of hope will set me apart –
to stand on my own, until I have grown.
Let me climb to new heights.
Set me free to take flight.

The third piece of art has been donated by another wood turner, Taylor Ledden, who lives in Tiny Township. Still in progress, he is creating a bowl made from an attractive yellow cedar burl and embellished with bronze and woolly mammoth ivory. The ivory, which is between 10,000 and 50,000 years old, comes from Dawson City, Yukon, here miners found it while working underground. Taylor says he inserts such distinctive features in his work to emphasize their unique quality.

All the artwork will be promoted on the DCAFS website as well as on the Wellies to Wishes Facebook page. Jim Lorriman has also created a website to showcase Robin and Hailey’s journey to recovery and his own journey in understanding their stories and creating the plates.  Learn more at thejourney.jimlorrimanwoodturner.com.

The event features artisanal foods as well as a live and silent auction. Items for the silent auction include a home-baked pie a month for a year, a flight for three over Georgian Bay in a Cessna, and a daytrip package to four restaurants.

Along with the artwork of Jim Lorriman, Kathryn Thomson and Taylor Ledden, the live auction will include experience packages.

In addition, Dufferin Piecemakers Quilting Guild has partnered with DCAFS to make a quilt after the event. Squares will be available for attendees to sign or add their well wishes for a donation.

Tickets are $60, available at Dufferin Child and Family Services, 655 Riddell Road, Orangeville, or online at dcafs.on.ca.

A freelance writer and mother of five, Laura LaRocca lives in Laurel. 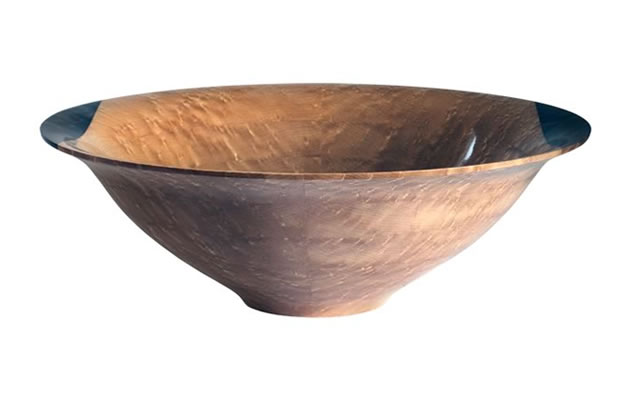 Jim crafts his pieces from fallen branches and other found wood, including remnants of docks, flooring and window frames. 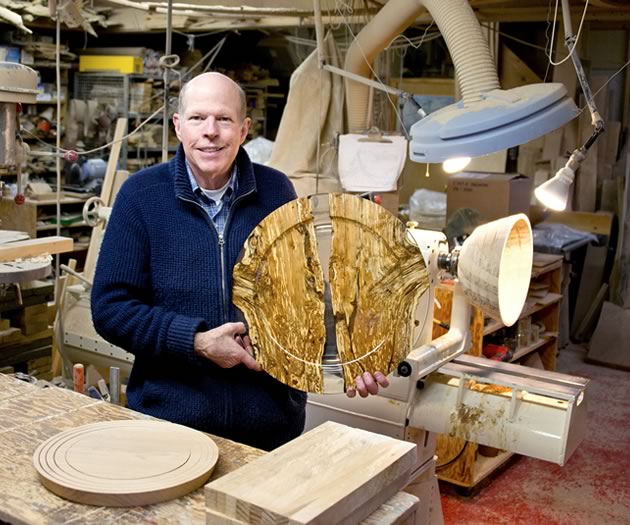 The single most important thing I wish to accomplish – is to encourage artists and craftspeople to preserve their craft by making videos spelling out the intricacies of their talent.