Ferdinand followed Duke around all day, trying to chase cats with him and bark when visitors arrived.

I have learned the hard way that writing about a favourite animal can be dangerous, even fatal. Any attempt to preserve the image of a furry friend for posterity always ends in tears. I once transferred a photo of a dear dog onto a coffee cup for my wife, and we buried the dog within the year. One summer, two artists came to the farm, one to paint our black sheep in egg tempera and the other used acrylics to immortalize Mrs. Trotter, the nanny goat who nursed all of our children. By the time those paintings were hung on the wall, both animals had entered into rest.

The rule only applies to animals I like. We inherited a despotic Appaloosa mare named Zooey who ate all the boards off the barn and beat up every companion horse we gave her. She was an escape artist and a fence jumper and a tree eater and a complete pain. For years we maintained the public fiction that she was “a dear old thing.” But I quietly painted and photographed and wrote about that horse for 15 years hoping to do her in. She was indestructible. A sculptor working life-size in bronze could not have killed that horse. Zooey lived to be 35 and died a completely natural death.

Many years ago, when my daughter Hannah was five years old, she took her pet duck Ferdinand to the fair and won first prize. We were all thrilled for her, but when she stuck Ferd’s picture up on the fridge with the red ribbon, I had an ominous feeling. I knew Ferdinand kept strange company. He thought he was best friends with Duke, the old collie dog who lived in the barn. Ferd followed Duke around all day, trying to chase cats with him and bark when visitors arrived. Duke did his best to tolerate this, but he made it clear that he would rather not be seen with a duck. One night, when Ferd climbed into Duke’s bed in the barn and tucked himself in beside him, I noticed the dog’s lip start to curl. I worried I might come out in the morning to find a mauled duck on the floor, so I took Ferd to the other barn. He promptly decided he was best friends with a sheep. 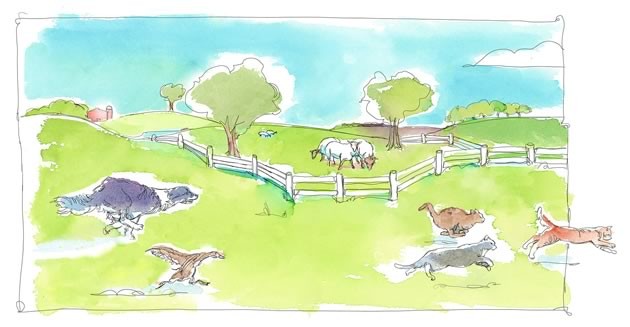 Ferdinand followed Duke around all day, trying to chase cats with him and bark when visitors arrived. Illustration by Shelagh Armstrong.

This, too, was risky behaviour. A sheep is not careful about when and where it decides to flop down for the night, and once down it is deaf to all suggestions about getting up. Sure enough, one morning after the sheep had struggled to their feet and gone out to the barnyard, I found poor Ferd pressed flat into the straw and very stiff.

Hannah was heartbroken. She sat for a long time on the garden wall cradling Ferdinand in her arms, tears rolling down her cheeks, begging him to wake up again. We buried him under the crabapple tree in a moving ceremony attended by all staff and planted crocus bulbs over him that continue to bloom to this day.

A short time after Ferdinand’s passing, Hannah and I were sitting in the dentist’s waiting room, reading one of those New Age children’s books out of Kansas City, the type that celebrates uplifting examples of sharing and goodness. This thin volume had reworked the story of Humpty Dumpty to give it a happy ending, showing how all the king’s horses and all the king’s men, using teamwork, co-operation and respect, managed to repair Humpty and set him back on his wall.

The story failed to impress Hannah who, at age five, already knew that when eggs break there is nothing to be done. Stuff happens. A favourite duck dies and you must gather yourself up and go on. Very rarely do we get a chance to put the Humpty Dumpties of the world back together again. It was an important lesson and although it was painful to watch it happen to a child, I knew I must not try to shield her from it.

The Stoic writer Epictetus told us that we should be careful not to hold those things we love too closely, for the day may come when we have to live without them. If Epictetus had owned a duck like Ferdinand, he might have added that it is also important not to date outside your species.