The Little House Down the Lane

The owner knew from the start that she wanted a small stone house and looked for two years before learning of this one from a friend in the area. 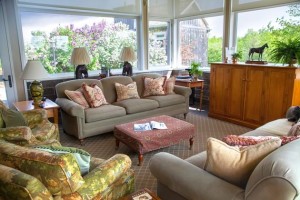 Bathed in light all day, the living room addition looks out to The Lounge and a spectacular lilac garden. Photo by Pam Purves.

Set well off a quiet gravel road, at the end of a long driveway, sits a small early 19th-century stone house in a setting that is both expansive and intimate.

Described as “magic” by the owner, it has a hardwood bush to the east, the remnants of an old barn foundation and rolling hills to the northwest, and gardens everywhere in-between.

This house started as a home for one and became a home for two, so you could say its magic is quite powerful.

The owner knew from the start that she wanted a small stone house and looked for two years before learning of this one from a friend in the area. She liked everything about it and bought it an hour after it was listed.

The previous owners had invested in making the old home work for contemporary living, adding a modernist living room addition with large windows, and renovating the kitchen with fine custom cabinetry and French doors leading out to a patio and small pool. They had also planted a small, elegant parterre at the original front of the house, surrounded by a hedge and backed by old-fashioned hollyhocks and Scotch thistles.

Although the stone walls and deep window casements were the initial attraction, the new living room and refurbished kitchen clinched it. There was little she wanted to change.

But change is inevitable as owners find their way around a home and get a feel for how they’ll live there. 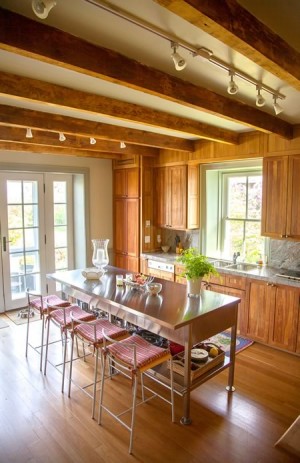 Custom cabinetry plus steel and stone surfaces make for a perfect kitchen to work in. Photo by Pam Purves.

The first challenge was how to maintain the exquisite gardens. The owner was sure she couldn’t, but wanted to preserve as much as possible. The second was the realization that mosquitoes and other creatures thrive in the countryside – so a screened porch became a priority.

Working with contractor Mike Vito of Renditions Design Build, a substantial three-season room was added to the west side of the house. It incorporated one of the original entrance doors for direct access to the kitchen. This meant removing half the parterre garden and moving plants with care to another spot on the property. The main entrance was now from the parking area by the living room addition.

Another important change was investing in a pool heater. With Erin’s unreliable summers, the water was often too cold to enjoy. So in went the heater.

Finally, the patio was enlarged. Like the screened porch it adjoins the kitchen, making it easily accessible for the cook when fine weather allows for outdoor gatherings.

Beyond that, not much was changed in the original house. A tiny room at the bottom of the original stairs is called the “wee” room and accommodates a bed for a guest. Under the eaves on the second floor, which once must have had rooms for children, the master bedroom is one open space with a good-sized dressing room and bathroom en suite. In the kitchen, space was modestly reconfigured to accommodate a larger refrigerator and stove, and add a pantry. The owner loves how the kitchen works and flows so easily from screened porch to patio.

So the house was complete, but an additional structure was added later to the property. And therein lies a tale.

For 50 years the owner’s family had one of the premier stables for hunters in the country. The building that would eventually find its way to Erin was first constructed in 1930 by her grandfather as part of the barn on the family farm in Toronto. 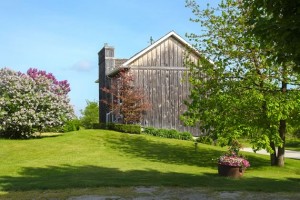 The Lounge structure was moved from the owner’s family farm and rebuilt on her Erin property board by board. Photo by Pam Purves.

Fondly called “The Lounge,” it served as a weekend retreat for her father when he was a young man, and was the changing, smoking, drinking and joking room for the gentlemen who visited. When the family moved to a farm in Brampton in the late ’50s, the barn went with them.

With the aroma of horses, cigar smoke and leather so strongly and lovingly identified with her grandfather and father, the Erin property owner was determined to move The Lounge once more when the family’s Brampton farm was sold.

Working again with Mike Vito, the building was carefully deconstructed. Each piece labelled and numbered – rather like an archaeological exercise – and just as carefully reconstructed in Erin.

The original Lounge had a stone fireplace that was central to its design and the enjoyment of the space. However, the massive stones were so thoroughly cemented in place that the fireplace was impossible to move. Still, remaining faithful to the building was critical. Ingenuity was called for. By transporting some key stones and replacing the rest with a much lighter product with a granite veneer, they were able to reproduce the fireplace so faithfully that her visiting brothers gasped, “How on earth did you get the fireplace?!” 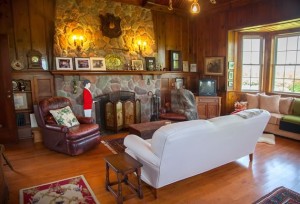 Well aged woodwork and lots of western light warm the sitting room in The Lounge. Photo by Pam Purves.

And there is even more interesting history to this sentimental story. The Lounge featured prominently in the 1977 film Equus, directed by Sidney Lumet and starring Richard Burton and Joan Plowright. Later, it was almost lost when it caught fire during a tornado. Drivers coming up the road after the storm spontaneously pulled into the farm and formed lines to help get animals and goods out of the buildings. The Lounge sustained some water damage but was otherwise fine. So this little building is also a precious reminder of the kindness of strangers.

No longer a setting for gentlemen’s evenings, it is used as a guest room for friends and family.

The current project – because there are always projects on country properties – is to plant a vegetable garden in the foundation of the property’s original barn. Already bedecked by forsythia, glorious in May, the foundation provides a sheltered and defined growing space. Time will tell what the harvest is like.

This home, like so many others in the country, is well loved and well lived in. Perhaps the country provides a particular kind of solace for people who live in the city during the week. Perhaps for those who have grown up with horses it is only natural that the country continues to be a draw. People seek the quiet and the opportunity to take their lessons from nature. It takes a special type. Here is a meeting of just such a type and just such a place. 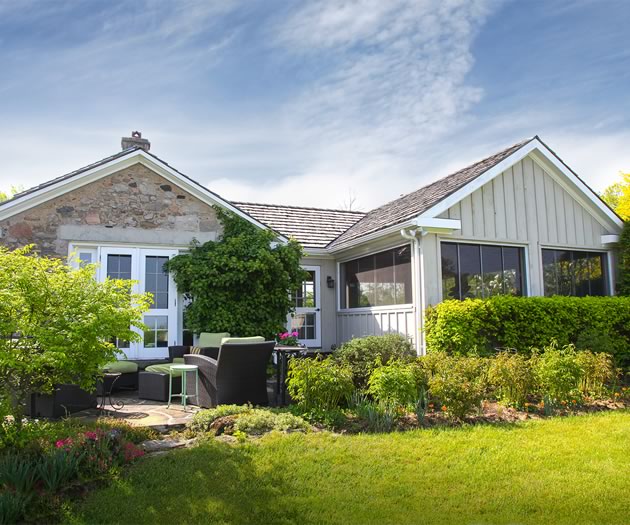 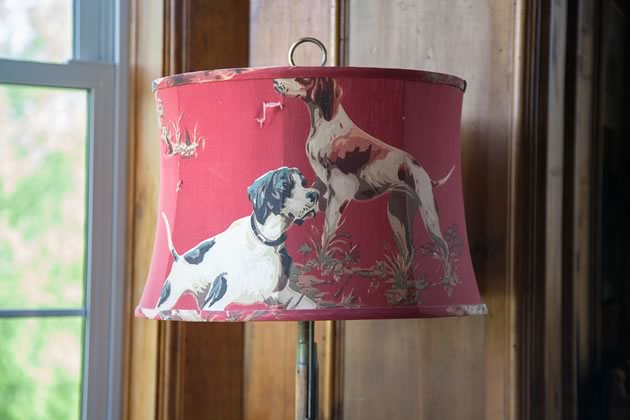 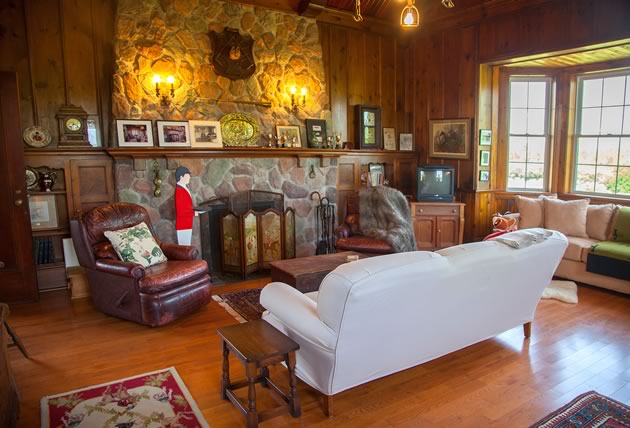 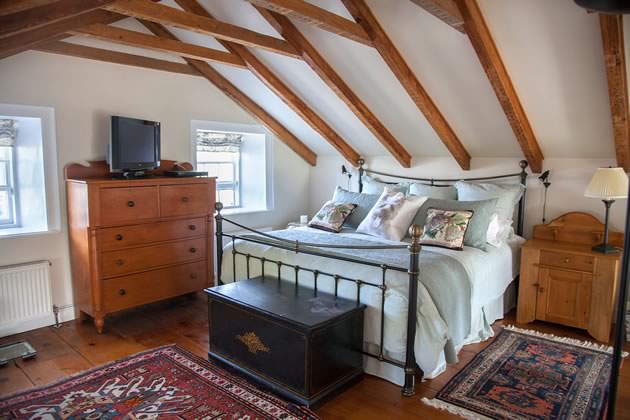 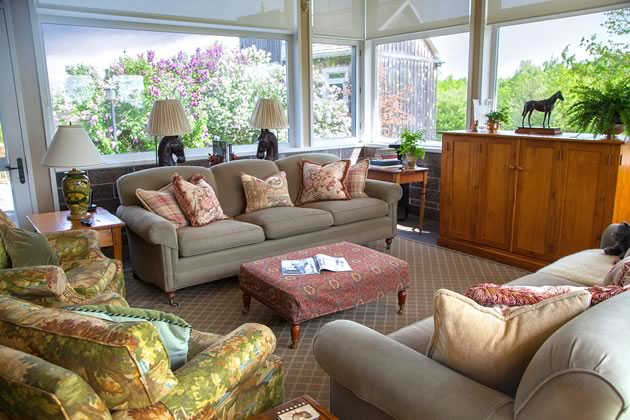 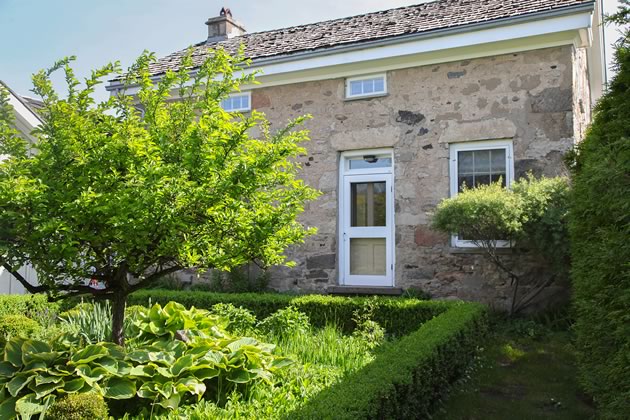 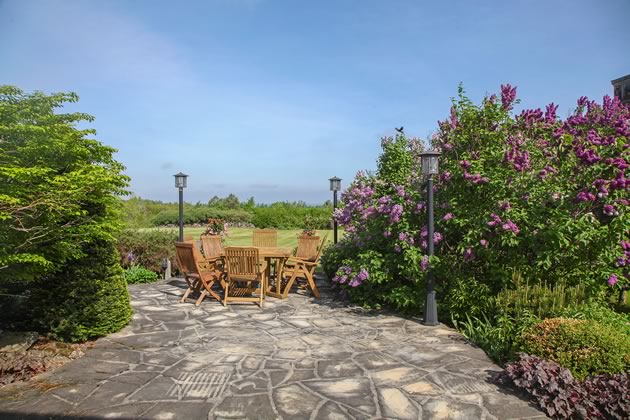 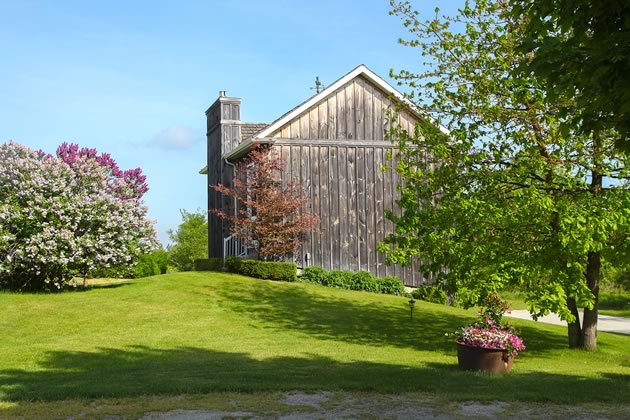 <
►
>
The Lounge structure was moved from the owner’s family farm and rebuilt on her Erin property board by board. Photo by Pam Purves.