I shared a party line with Kenny for 20 years. It was a forerunner to the Internet chat room and I found it essential for staying abreast of current affairs.

One of our neighbours died last winter and we didn’t hear the news for nearly three weeks. This never would have happened in the days when Kenny Jardine was responsible for keeping us up to date.

Kenny lived across the Blind Line from us at the end of a long lane in a little white house hidden by willow trees. I met him in the spring of 1978, just after I had taken possession of the property, and he brought me up to date on the abandoned farmhouse I planned to restore.

“You know it’s haunted,” he said. Then he told me about a woman who contracted rabies and jumped out the upstairs window. This was the sort of story he loved, because it required expanding a thing to proportions that satisfied his imagination.

Kenny’s observations often found their way into my “fables,” as he used to call them. It’s a good word – fables. I’ve never found a better one to describe this occupation of writing. I’ve lost count of the ideas he gave me, sitting in his kitchen beside the woodstove or leaning on the box of the pickup truck at the mailbox. Like me, he was vague about dates and always looked for colour and dialogue that brought a story to life.

One time we were standing out at the mailbox in a howling wind off the lake and Kenny reported that one of the neighbours had driven south to Orlando to escape the winter and died there the week before Christmas.

“Terrible time to die in Florida,” he said. And after a pause he added, “Pretty good time to die up here.”

I shared a party line with Kenny for 20 years. It was a forerunner to the Internet chat room and I found it essential for staying abreast of current affairs. Every morning I would log on with Kenny and his friend Helen Kenwell, who lived up in Maxwell, to listen to the news and their comments. They covered the hard news first: births, deaths, break-ins, traffic accidents and barn fires, lost cattle and rabid foxes. Once he was loaded with all the current events, he would set off like a postman to spread the word. He had a milk and cookies route that took him across the fields to the kitchens of the Jardine Sideroad and the Blind Line. I have several photographs of him, but the image that sticks in my mind is a bent figure moving across the field, tilted slightly forward, his legs moving quickly, almost in a trot and eating up the miles like a coyote. 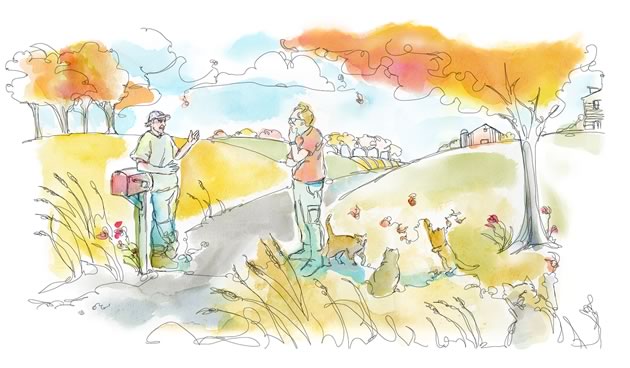 I shared a party line with Kenny for 20 years. It was a forerunner to the Internet chat room and I found it essential for staying abreast of current affairs. Illustration by Shelagh Armstrong.

If we knew each other well as neighbours in those days, it was because Kenny laid down the fibre optic cables between our houses. He pollinated from flower to flower, checked to see that smoke was coming out of the chimney. He remembered birthdays and anniversaries, reflected over a hot biscuit, patted the dog and moved on.

Because he walked everywhere and didn’t carry an ounce of fat, Kenny enjoyed basically good health for 84 years. When he finally made the trip to the hospital and received a terminal diagnosis, the doctors worried about the possibility he had picked up some superbug and put him in isolation. Cutting Kenny off from human contact was about the best way to torture him. I had to don a gown, mask and gloves to get in to see him, and when I finally opened the door, he said, “Huloo! Did you hear they saw a moose on the Min Baker Sideroad yesterday?” I had not heard that. This was breaking news and I must have looked astonished. “I still have the phone,” he shrugged.

He returned to the hospital after Christmas and went down quickly. I watched the room fill up every night with his extended family – an extraordinary thing for a man who lived alone for much of his life. When Kenny was past the point of talking, the visiting went on around his bedside until the nurses eased us all out and we stood yakking in the parking lot. It was a shame Kenny couldn’t join in because it was the kind of evening he loved best.

As a writer, I have always felt charged with the safekeeping of all items of worldly and unworldly significance, as if I will be held personally accountable if any of them were to be lost. Kenny understood this perfectly and fed my habit.

The Information Age of Instant Everything has overtaken Kenny and his like. Now that I am reduced to the Globe and Mail and Twitter, I feel dangerously under-informed.