When I bolted from the insurance company in the city nearly 30 years ago, the idea of a home office was a fairly novel concept. People had studies and dens in their homes, but employers snorted at the notion you might do all of your work from there. Wouldn’t you spend all day in your pyjamas watching General Hospital?

When my friends heard I was moving north of Highway 7 to a farm to write, they worried my brain would atrophy without the stimulation of “people friction” and I would become unproductive. I assured them that if my brain didn’t have to think about life insurance ever again, it would probably thrive. Besides, I argued, once you took the commuting and all those pointless meetings and martini lunches out of your day, you gained a seven-hour time advantage over everyone else.

“Yes,” they said. “I suppose you would have lots of time to think and write out there.”

I wasn’t sure about that. I had tried writing a novel once before and I knew a cabin in the woods in winter was a tricky place to concentrate on anything but survival. In 1974, I dropped out of school two credits shy of an economics degree and took the train north to the cabin thinking the great silence of the Canadian forest would help me think long uninterrupted thoughts and commit them to paper by the light of a candle while the wind sculpted snowdrifts around the house. Omar Sharif did this very well in the movie Doctor Zhivago. He scribbled feverishly with a pen and inkwell in front of the fireplace late at night while Julie Christie slept and the wolves howled in the moonlit field in front of the old chateau. There was a lot of crumpled paper on the floor, the theme music would falter, and you could see this was all pretty difficult for him. But then Julie Christie would appear at his shoulder in a lace nightgown with a mug of tea and the music would pick up again, and you just knew something really great was going to happen.

My log cabin had an open fireplace that pulled every cubic foot of warm air out of the house and sent it straight up the chimney. The drafts came in through cracks in the logs, making the cobwebs float up and hang on the air. I chopped wood and stoked the fire until the couch finally thawed out. Then cluster flies emerged from the logs in biblical numbers and buzzed around the lampshades. By the time I had finished swatting flies and chopping more wood, I was very hungry. The cycle of eating, chopping, napping, chopping, swatting, picking flies out of the soup, and scanning the horizon for human company took up quite a bit of a writer’s working day. After two weeks of this, I called a friend. We met at the airport and flew to a warm beach in Fort Lauderdale. I tried writing at the hotel bar, but that didn’t work either.

The conclusion I came to was that writing in a cabin in the woods or anywhere else is not a good idea unless Julie Christie is there and thinks you are adorable. And so I took a job at the local paper and waited for her to show up.

Thirteen years later, she did. After a whirlwind courtship we got married, and straightaway packed up the apartment to head north in pursuit of that stubborn fantasy of a writer’s retreat. That was 27 winters ago and we are still here in our little farmhouse. People friction followed us, because we have neighbours. Add the friction of children, animals, machinery, appliances and weather, and you have a recipe for endless distraction.

E.B. White once wrote that “just to live in New England in winter is a full-time job.” He lay awake in the mornings marshalling the problems and projects of the day, none of which included sitting at the typewriter. He chopped wood, fed chickens, thawed pipes and plotted the murder of a fox that had been raiding his henhouse. If he ever got time to sit at his desk, it was often just to flip through seed and poultry catalogues and dream of gentle south winds and spring.

I have a lot of days like that. Somehow it all works and that may be because I know that, to be of any use, a writer must learn to live in the world, not retreat from it. 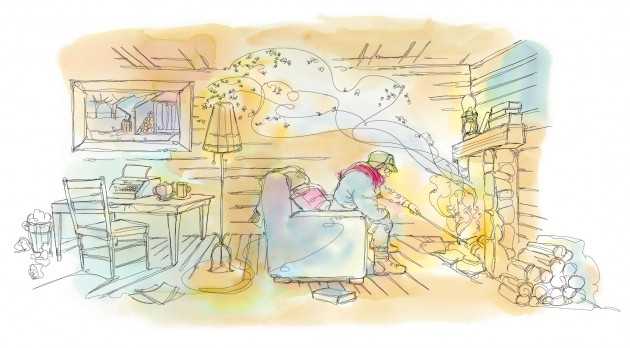 The conclusion I came to was that writing in a cabin in the woods is not a good idea unless Julie Christie is there and thinks you are adorable. Illustration by Shelagh Armstrong.