A Puff of Straw

Farming is currently the ninth most dangerous occupation on the continent. Statistically, it’s a lot safer than commercial fishing or garbage collection, but it’s more than twice as dangerous as police work or firefighting. I know very few farmers who have made it through to retirement without missing fingers or a limp.

On a cold night last November, I was climbing a ladder in the barn to get some hay bales down for the sheep, the same ladder I have climbed daily for over 25 years. I stepped over onto the haymow floor and put my foot down on a puff of straw that went out from under my boot like a bar of soap. Next thing I knew I was hanging by my fingers from the edge of the haymow. But fingers do not support me anymore and I dropped six feet down onto the arms of the loader tractor, bounced once and landed full length in the manure bucket.

This was not good. My right leg and my left arm wouldn’t work and it was very painful to breathe. I have never carried a cell phone around the farm and there was no way to signal the house. My trusty guard dog Dexter was sleeping on the chesterfield in front of the fire, dreaming of rabbits. I tried to pull myself up into a sitting position with my writing hand, which has never failed me yet, but the most I could manage was to slither out of the bucket like an inchworm and get my head up against the front tire of the tractor. There was nothing else to do but lie there patiently and wait until my wife noticed I was missing. She would likely send my daughter out to look for me first, so it was important not to alarm her too much. I tried to keep my head up and began practising an opening line.

Irony is lost on sheep. They studied me through the steel gate of their pen, puzzled as always by my behaviour. “Why is he lying on the floor talking to himself when we need a bale of hay?”

The temperature had dipped to the freezing mark and a stiff wind blew across the concrete floor. I was wearing a heavy barn coat but my legs were stretched out into that wretched wind. Within minutes I began to shiver.

Whenever I am in pain, facing extensive dental work or sitting through an evening of throat singing and interpretive dance, I close my eyes and go to a special place I call “airport mode.” The last time I whacked myself this severely was about 20 years ago, falling out of the same haymow and landing in the same place. On that occasion, I had an excuse because I was escaping from a nest of angry yellow jackets. I didn’t get stung but I did crush my heel and ever since, I have limped on rainy days, the way all my wife’s brothers and western cousins limp. Not quite the same, for they are cowboys, and a cowboy’s limp is part of his rugged charm. When a writer limps, people just assume it is stiffness brought on by too much deskwork. I tried telling people that my bull-riding days were over, but no one took me seriously.

The sheep gave up and lay down without their supper. The wind howled and the barn doors banged. My neighbour drove by in his truck, but he was scanning the road for my dog and not looking at the barn. I drifted in and out of consciousness and lost track of time. 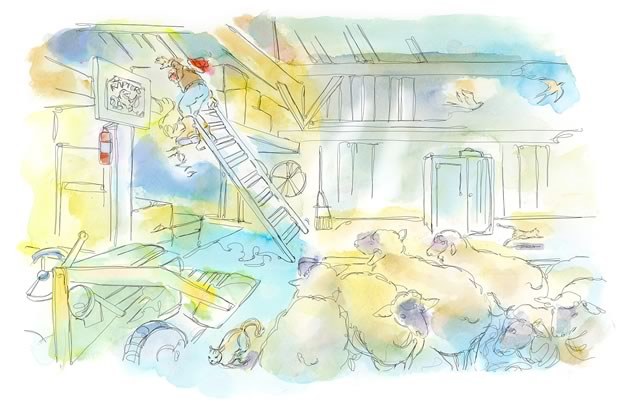 The sheep gave up and lay down without their supper. Illustration by Shelagh Armstrong.

Then suddenly, she was there in the doorway carrying a barn lantern, my very own Florence Nightingale. The dog was beside her, very sheepish that he had been dozing instead of dashing to the house to write “Fire” in the mashed potatoes. No citation for bravery for Dexter.

Farm women always curse their husbands for two minutes before they call an ambulance. That’s because they saw this coming and can’t understand why you would own a ladder and not learn to tie it off. Then she put a blanket over me and held my hand.

Some people sit on a waiting list for a year for a hip replacement. If you fling yourself off a cliff they will do it in eight hours, but I don’t recommend it. Thanks to modern science I am walking again without a cane, not quite sure which leg to limp on.