With the dairy herd gone, a farmer’s daughter reflects on memory and identity. 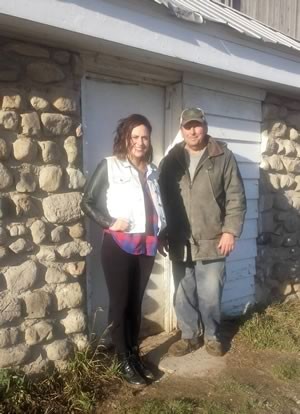 Hunter Andrews with Elizabeth not long before the dairy herd was sold last fall.

My father is the most private man I know and the perfect archetype for his farmer occupation. He is humble, hardworking, and fiercely independent, with the classic aversion to outside help and outside visitors. He started dairy farming full time at age 21, but from birth might be more accurate. By his own account his service began at age three. His first job was to go down to the barn with his sisters to switch on the milk house lights.

He grew up in Caledon in the same house I did, an old red brick with green shutters that had its centennial the year I was born. He has a stubborn horseshoe of brown hair, cool blue eyes, and a face etched by years spent sitting on a tractor seat underneath a hot sun. His worn hands reveal a life of labour – scarred palms and callus-capped fingertips – hands like his late father’s, and unlike mine and my two older brothers. None of us will be farmers and none of us will inherit those scars.

My dad sold his dairy herd of 64 cows on October 1 last year, after nearly four decades of farming. He wasn’t alone. At the time of his departure, roughly 40 Ontario milk producers had left in the span of a couple of months. The motivation behind their decision depends on the farmer and is born from a variety of factors.

The consequential threat of trade deals like the Trans-Pacific Partnership is one. Such deals open up the market and jeopardize Canada’s current supply management system. Supply management adjusts production to fit consumer demand and maintains stable milk prices, ultimately ensuring fair and predictable revenue for farmers. Without this security, farmers are at the mercy of a fluctuating market. Mandatory regulations are another factor. Many aren’t willing to upgrade to expensive machinery and technology in the face of such uncertainty, especially in small-run operations. For some it could also be the farmer has no interested offspring to take over.

About a week after the milk cows were sold, I visited home from Toronto. My parents were away for the weekend, a luxury previously barred by 4:30 morning and evening milkings. It was the second week of October and the trees along the laneway were rich in red, copper and yellow leaves, illuminated by late afternoon sunlight. My dad had been tight-lipped about the auction the week before. He didn’t go, but seemed satisfied with the outcome. His satisfaction was, as he said, because things went about as well as he expected. The cows sold for what he thought they would. He felt there was no sense in going. All he could have done was watch. What he didn’t say, and what I knew he meant, was there would be pain involved in a goodbye that hurt too much to endure so passively.

I’m not sure what I was expecting when I headed down to the barn. Part of me envisioned ruins, a gutted mess of split boards and rot, a tangible parallel to the change in my parents’ lives. It wasn’t like that, of course. The physical space was the way it had always been, but there was a newfound stillness that disturbed the sameness. 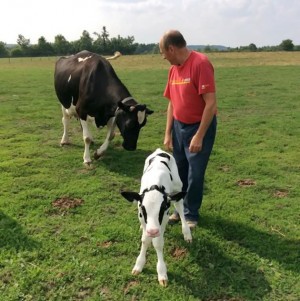 Our identities are often composed of spun narratives – a series of memories plucked and strung together. Our stories and the recollections we choose are based partly on experience, partly on the mesmeric haze of retrospection. When I moved to Toronto for university, I swapped fields for a concrete jungle. Suddenly my agricultural upbringing had its own exoticism. It was a change from the normalcy it had in Caledon. In a crowded city that seemed to breed anonymity, my background helped me carve out a sense of myself. I embraced this difference and felt proud of where I was from.

It was easy to let my former farm-kid tether slacken and to let go of some childhood bitterness: Can’t go out after school – gotta go home and feed the calves. I set aside the tedium of hours picking stones out of the fields. I ignored summer days on a wagon, sweating in the heat and geting pricked by straw as I sent square bales up the squealing elevator to the loft. Now when I thought of home, even the weeds seemed dreamy.

I envisioned fields filled with spheres of dandelions seeds, ephemeral and soft, shaken by wind and erupting into wishes along the fence line. Milkweed and purple thistle brightened in memory. Surrounded by the high rises of the cityscape, thinking back to the farm was a comfort. In the smog and city lights I’d think about the soft-belted redness of the changing skyline spilling over the escarpment. I missed the emptiness of 150 acres of land, the darkness and serene silence when I slept. I’d idealize and filter out the bad bits: the stressful calf births, broken-down machines, unexpected rains running over unbaled hay. Not that these were ever truly my burdens. Only ones I felt secondhand.

From the outside, the milk house was the same – all grey stone and white wooden boards, a roof of slanted, wavering metal. Inside, faint yellow light poured through the window, revealing strips of listless debris. Barn cats rubbed my legs, purring madly, meowing to be fed. I heard the taps run, steady drops of water leaking from corroded copper.

I noticed the milk cooler had yet to be removed. Still against the wall, it was now empty and purely ornamental. Washing it used to be one of my childhood chores. I’d hold the brush in my hand and scrub hard blue bristles until my reflection bounced back in the clean chrome. Once, when I was a kid playing, I’d accidently kicked off the cooler’s stopper. I watched the floor rise with rushing pools of white as the milk flooded underneath the door and out into the barn. The memory still makes my stomach turn.

Under these familiar sounds were the absent ones. The unheard noise of the milk machines being cleaned, the whirl of the fan blades spinning on the whitewashed walls of the barn. There were still leftover calves in the pens that needed feeding, but I felt the missing Holsteins in a palpable way. (My dad couldn’t let go of farming entirely. The calves will join the heifers and steers as he transitions to a beef herd.) 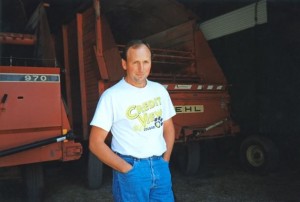 Hunter Andrews as a young farmer.

I knew I’d never see my dad pull back from behind the warmth of their black-and-white coats as he milked them, the same way my grandpa had. I thought about my dad spraying milk at me straight from the udder and his childish laughter as I rubbed my face, the cacophony of calls when my whole family brought the cows in from the field.

When the cows were sold, I felt a loss. It was more than just their physical departure from the farm. I thought about the greater loss of small-run operations like my dad’s and what I see as the imminent loss of the supply management system that has kept farmers secure. Canada’s individuality often gets mangled up in statistics from south of the border through news reports and other media.

In the city, I find most people are not aware of Canada’s high standards in milk production and tend to confuse policies and practices they hear are going on in the States. I still feel compelled to argue with strangers about Canadian dairy standards, to express our differences from American policies, and explain the way it is for many farmers with small operations. Of course, not everyone wants to talk about supply management in Toronto bars.

Maybe with the cows gone I’ll feel less compelled to debate, but as they say, you can take the girl out of the country, but you can’t take the country out of the girl. My fear is not so much that we will lose the high-quality dairy industry we currently have in Canada. To me, this loss feels unavoidable. My main fear is that the sacrifices of farmers like my parents have been undervalued and ignored to a point where it is too late.

Change is scary, especially when it forces us to take stock of our lives. It wasn’t until my dad lost his identity as a dairy farmer that I realized how much of myself had become tied to his occupation. Off the farm and on my own I clung to my childhood memories. As I considered who I was and who I wanted to be, I realized my upbringing had changed the way I look at the world and continues to inform the way I live my life. As I’ve grown up, I find myself re-entering these experiences from the perspective of the person I am now, and understanding how meaningful they are and how lucky I am to have these memories.

When I moved away I took comfort in my lineage. In the anonymity of the city I was proud of my parents and my own trivial assistance and contributions on the farm. All the same, I respect the convenience of retrospection. Like first loves, recollections of our past are rarely honest. They are often on one side of the spectrum, both uglier and more beautiful than any truth. 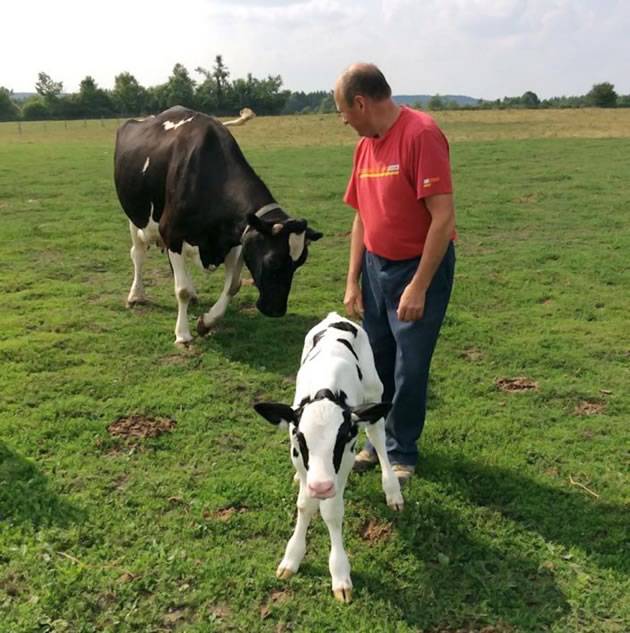 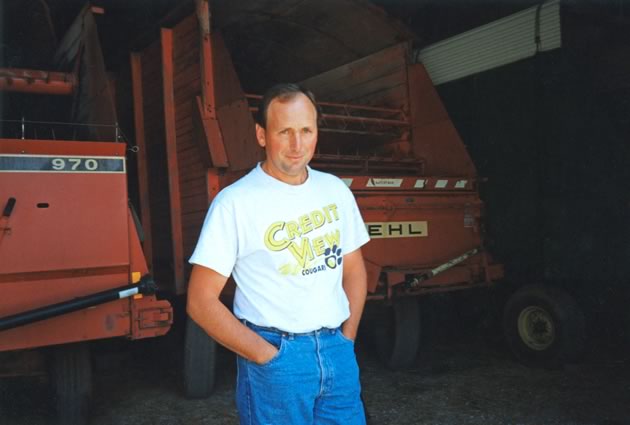 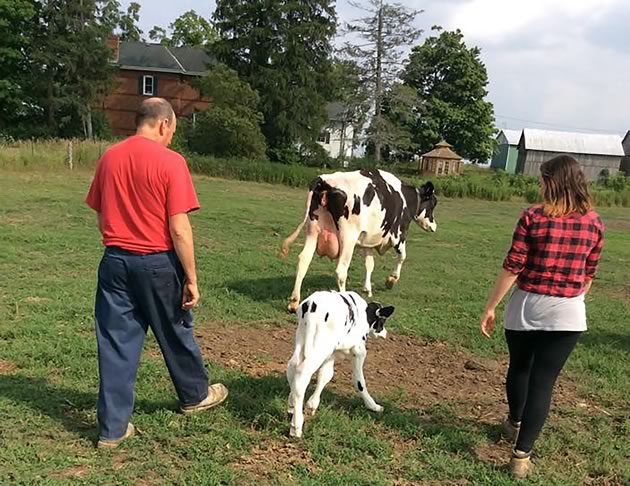 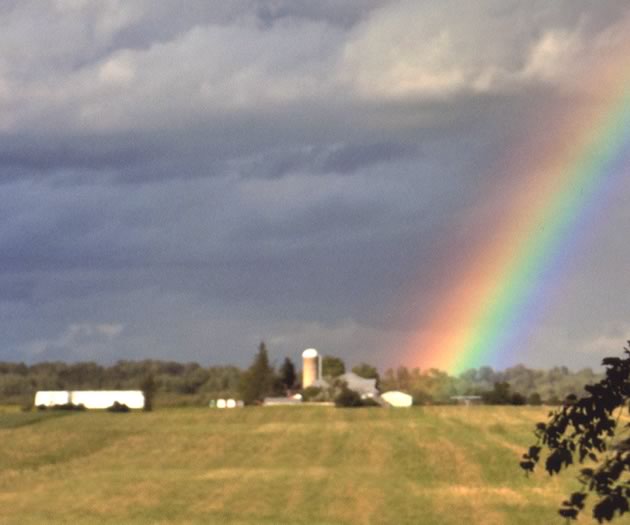 <
►
>
This Caledon farm has belonged to the Andrews for well over a century.

About the Author More by Elizabeth Andrews

Elizabeth Andrews has a BA in English and is currently studying writing and communications at Humber College. 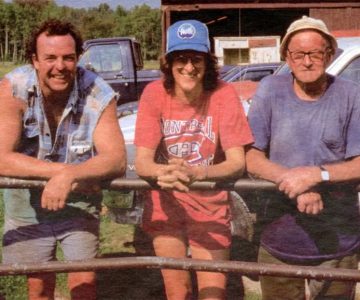 His Jersey cows have provided Art Bracken with a good life. And as the community changes around him, the daily routines on his Caledon farm remain the same.