Home on the Range

Need to soothe your soul and focus your mind? Try a cattle drive! 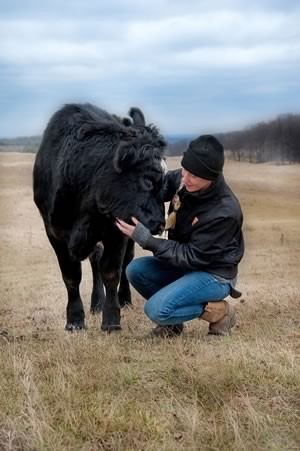 In the 1991 comedy City Slickers, Billy Crystal’s character decides that a cattle-wrangling adventure is the antidote to his midlife crisis. Mid-movie and suffering from saddle sores, he belts out, “Rollin’, rollin’, rollin’, keep them dogies rollin’, man, my ass is swollen, rawhide!” This is Crystal’s take on the theme song of the popular 1960s TV western Rawhide, that introduced Clint Eastwood as a hunk in a cowboy hat.

Peace Valley Ranch, where Carl “Crusty” Cosack, his wife Natalie Kotyck and their 25-year-old daughter Nikki operate a business called, fittingly, Rawhide Adventures, is a kinder, gentler sort of operation. But it too can ward off the slide into midlife – and beyond – while providing a valuable diversion from hectic lives. Cosack, who is widely known for his central role in the battle against the Melancthon mega quarry, says, “We’re Ontario’s last authentic cattle ranch.”

Peace Valley Ranch is home to some 40 horses and more than 120 black Angus cows on 1,200 acres of rolling hills, open fields and hardwood forests in Mulmur. The “natural horsemanship” techniques they employ mean the Cosacks’ horses are calm, gentle and nothing like the defeated plodders or headstrong runaways typical of many dude ranches. When training her charges, Nikki’s goal is to gain their utmost respect so they come to trust rather than fear people. The outcome is that her horses are as trustworthy as they are lively and alert.

The Cosacks’ cattle ranch depends on its reliable horses and guests in part because they drive the cattle. “On the four main drives of the year, we need the help because we move cattle over public roadways, over other people’s private lands and past many laneways. So keeping control of the herd is paramount,” says Carl.

The idea of a cattle drive is what drives Michael Flynn. A forensic engineer who is new to horseback riding and lives near the ranch, Michael says, “My dream is to become a decent rider who is useful on the farm.” Carl believes Michael will soon achieve this goal. “Michael is ready this year for sure, and we will assign an experienced rider to him to help with the uncertainties and surprises that seem to always be part of real-life outings.”

Vanessa Morgan, a Rawhide veteran who escapes to the ranch for relief from the stress of her duties as CEO of a Toronto-based investment firm, has taken part in at least 30 cattle drives. “You forget you’re riding,” she says. “You’re so focused on watching the cattle and anticipating their next moves that you’re not consciously thinking, I’m going to ask my horse to speed up or slow down or turn. You just do it.”

To foster trust and respect in her paint gelding Oklahoma, which Vanessa leases from the ranch, she employs the Cosacks’ natural horsemanship training techniques. In a sort of equine obedience class, she is teaching Oklahoma to walk over a tarp, climb onto a pedestal and balance on a teeter-totter.

When I visited the Cosacks to head out for a ride, it was a blustery, dramatic day with steel grey clouds crowding the horizon. As Carl and I left the farmstead, the gusty wind rattled a piece of loose tin siding on the barn. Up ahead, a dust devil turned a plastic bag into a twirling ballerina. Weather like this can cause less well-trained horses to go squirrely. Ears twitching, nostrils flared, they want to flee these “demons.” A day like this would normally be a nightmare for a trail guide, but not at Rawhide Adventures. Kalijah, the striking 17-year-old leopard Appaloosa I was riding, was alert but not afraid. 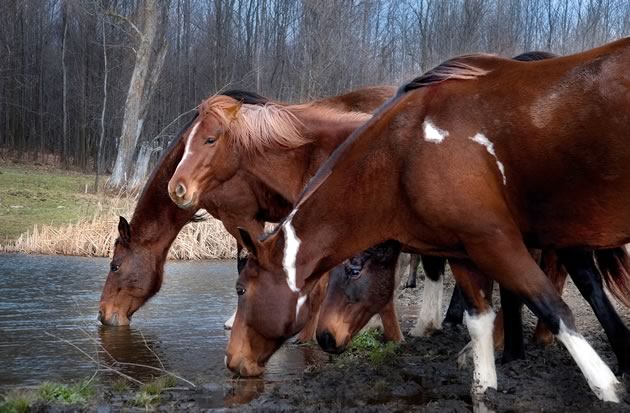 We left the open fields dropping down into the forest, crossed streams and rounded a small pond. As we ambled along, Carl explained that their trail rides are private. You can head out on your own with a guide or bring a group of friends. “It’s not the best model for making money, but where else can you go out on the trail one on one?”

Another of Rawhide’s strengths is its access to land beyond its fencelines. Kelly Heshka, who boards her quarter horse with the Cosacks, says, “I’ve been riding at the ranch for 16 years and I still don’t know all the trails.”

Kelly described her experience on a night ride – another highlight that made me want to stick around until dusk. With only the moon showing the way, her group wandered through the forest and across open fields. “You just had to trust your horse,” she said.

As Carl guided me around the property, he offered a few pointers on natural horsemanship. Our sedate pace offered a peaceful respite from life, but I was intrigued by descriptions of the cattle drives and Rawhide’s Rider Challenge. It’s a half-day trip that takes participants over the area’s “most intense ravines and ridges” on a “western bushwhacking” ride.

Rawhide takes in boarders, trains horses for others, and generally offers a service not dissimilar to what you might see on Heartland, CBC TV’s popular show set in the Alberta foothills. You can camp overnight or stay in the ranch’s bed and breakfast, which has two bedrooms, a kitchenette and the “saloon,” a comfortable communal room panelled in pine boards cut and dried on the ranch. Cowboy paraphernalia adorns the walls, giving the saloon an authentic ranch feel – the Cosacks have not fallen prey to the allure of kitsch.

At the end of City Slickers, dude ranch owner Clay Stone says, “When the three of you first got here, you were as worthless as hen shit on a pump handle. Now look at you – you’re cowboys.” The challenge of learning new skills had made Billy Crystal’s character at least forget about his midlife crisis.

Vanessa explains that a fellow rider once asked her how often during a cattle drive she thinks about work. Never, was her answer. “The task at hand,” she said, “required my full concentration.” 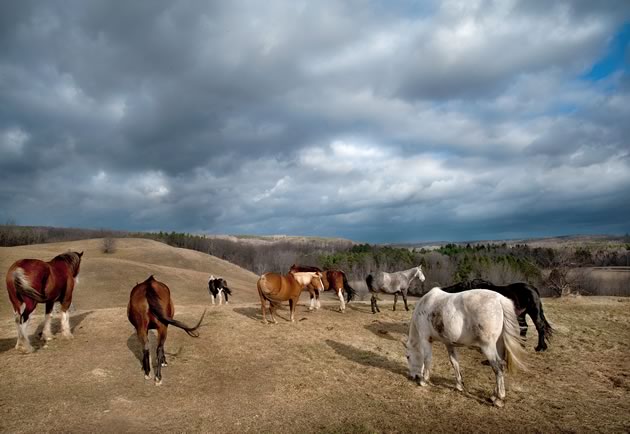 Kelly Heshka, who boards her quarter horse with the Cosacks, says, “I’ve been riding at the ranch for 16 years and I still don’t know all the trails.” Photo by Rosemary Hasner / Black Dog Creative Arts.