How design can make a house a home with pattern language. 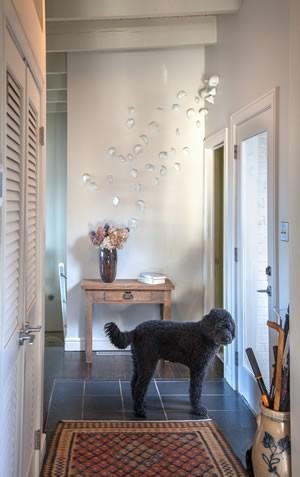 The 12- foot ceiling in the hallway designates this as public space where noisy greetings are enjoyed. Photo by Pam Purves.

How do we live in our home? Does it work? Does it help us feel relaxed and happy – or anxious? How many of us have any idea what makes a built space great to live in?

Nearly 40 years ago Christopher Alexander and a group of California architects attempted to answer these questions in both a philosophical and pragmatic way. They published their theories in A Pattern Language, a book that has become a bible for architects. It examines much more than the private home, and it’s worth reading if you’re interested in sustainable community development. But this column will limit itself to the home, and I’ll use my own to provide examples of the principles outlined in the book.

How many times have you approached or walked into a space that just felt right? You might have felt inspired, or cozy and comfortable, or at peace, or energized. You might not have known exactly how to express it, but somehow you felt good. You might have said to yourself, “I just love this house.” Though you might have liked the décor, it was probably the elements of the structure that struck an emotional chord.

In 1993, I purchased the home I currently live in after seeing it a few years earlier and being impressed by its “potential.” An unprepossessing example of 1950s modernism, it had been unused for a couple of years and was built of orange brick with brown and orange trim. My directions to visitors were simple: look for the A&W. It did not seem to be a house that dreams were made of. And yet, I dreamed.

What immediately attracted me to the house was the light. There was light everywhere. It reminded me of an art gallery, an art gallery set in parkland with woods and streams. Not only was there light and modernism, but there was also natural beauty. A bonus was that the house was set at the top of a rise among the treetops.

It was only some time after I’d bought the house that I discovered A Pattern Language and started reading about individual patterns. It was then I realized this homely house felt wonderful to live in because it had been built on enlightened principles. It became a kind of game for me to see how many patterns were represented in the house. 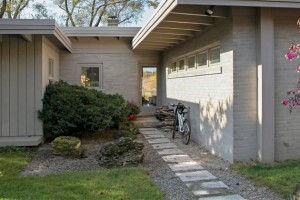 There are many. The first is the way the house draws you from the public area of the parking space to the privacy of the interior. A narrow stone path from the driveway pulls you into a yew-dominated courtyard, which leads to a porch. This gradual transition from public to private space feels welcoming and safe.

According to A Pattern Language, this is not accidental: “In every case, the entrances create a transition between the outside – the public world – and some less public inner world.”

“People will always gravitate to those rooms which have light on two sides.”

Once inside, you see that light in my house comes from three sides of the principal rooms. Not only are the rooms filled with natural light, but they also connect to nature everywhere you look. The book explains the importance of having light come from a minimum of two, and ideally three, sides and of having something to look at. “Rooms which are too closed prevent the natural flow of social occasions, and the natural process of transition from one social moment to another. And rooms which are too open will not support the differentiation of events which social life requires.” 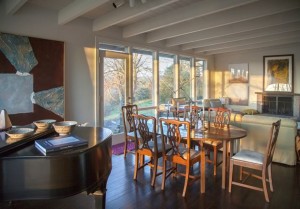 If you let your eye follow through the windows of my house, you see “outdoor rooms” – a porch off the kitchen, a terrace off the living/dining area and a small deck off the master bedroom. Each is defined by railings or leads the eye to views. They are inviting spaces that make you want to enter and use them. “Rooms without a view are prisons for the people who have to stay in them,” says the book.

In addition, my house offers an open-concept layout in which the foyer, kitchen, dining room and living room flow from one to another. The spaces are defined by a freestanding closet and a kitchen counter. Although it is a modest-sized home, the flow makes it feel large, yet with spaces clearly identified for various uses.

The energy in the house changes from room to room. The most energy is where the ceiling is highest, just inside the front door. From this door the ceiling slopes slightly downward through the living/dining area to the rear. This slope is met by a strong upward thrust of floor-to-ceiling windows next to the back door, an arrangement that creates three stages of atmosphere within about 800 square feet.

The lofty space at the front door is welcoming to guests and family as they congregate while shaking off coats and boots. Then the sloping ceiling generates a sense of coziness, enhanced by a fireplace. And finally the eye is taken again to defined spaces outdoors. It is a physical invitation to move forward and, in good weather, outside again.

I added to the flow of light, and this outside-inside rhythm, by replacing the solid wood exterior doors with glass.

“Vary the ceiling heights… so that the relative intimacy of different spaces can be felt.” 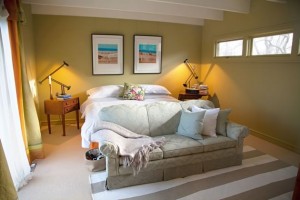 The lower ceiling in the bedroom makes the space feel cozy and safe while windows on two sides admit lots of light. Photo by Pam Purves

In the bedrooms and den, where a “lift” isn’t necessarily wanted, the ceilings are lower, making the space feel more intimate and safe. Even here there are windows on two sides, but on one side they are clerestory, providing a lot of light while maintaining privacy. This strategy of designing higher ceilings in public spaces and lower ones in private spaces is quite deliberate and adds qualitatively to the enjoyment of the space.

“No one can be close to others without also having frequent opportunities to be alone.”

The arrangement of rooms is also important. In my house the private spaces are the last part of the house you see. This coincides with the advice in A Pattern Language: “Place these rooms at the far ends of the intimacy gradient – far from the common rooms.”

The bedrooms are at either end of the building, so each is private. Although the distance between these rooms is short, the idea of separation is created.

On the lower level of the house is a large den or studio. This area is mostly below grade, but it too has light at both ends and connects to an outdoor terrace. This is the inner sanctum, the office, the most private place for someone who needs a place of her own.

Planning or choosing good space for yourself isn’t easy. We may not think in terms of patterns, but we know when something is right. There isn’t a room in my house that isn’t used, and that’s because all are rooms you want to be in. It is the first house I’ve ever lived in where this is true. If you are planning to build or to buy, you can’t go wrong if you have a copy of A Pattern Language to help guide your decision. ≈

A Pattern Language is available on Amazon. Or you can go online at patternlanguage.com to learn more about and explore ideas for creating houses, buildings, streets, neighbourhoods and gardens that work. 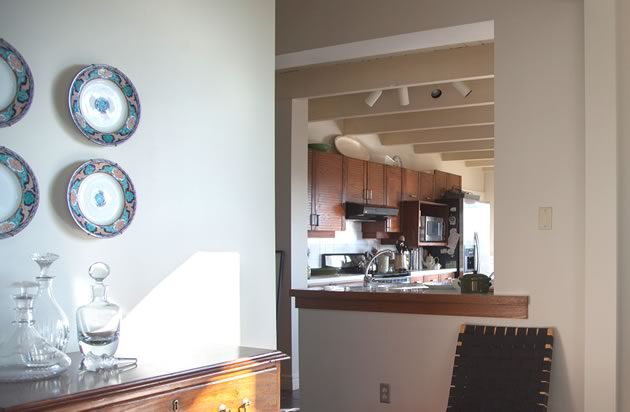 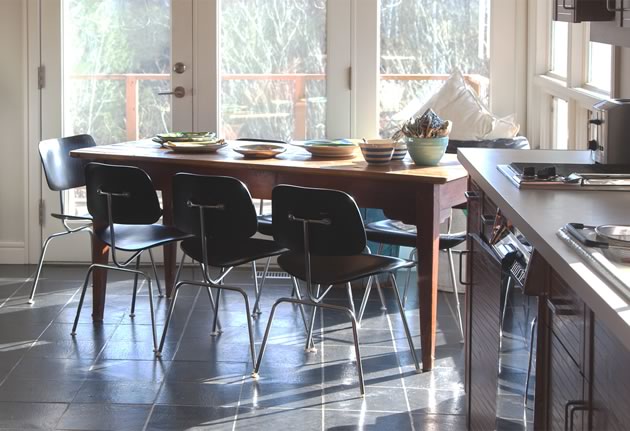 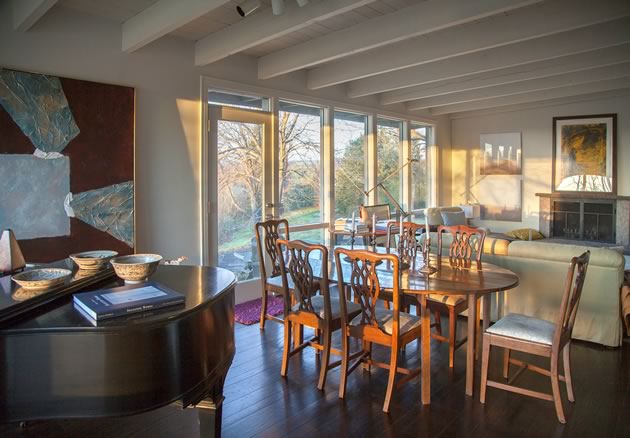 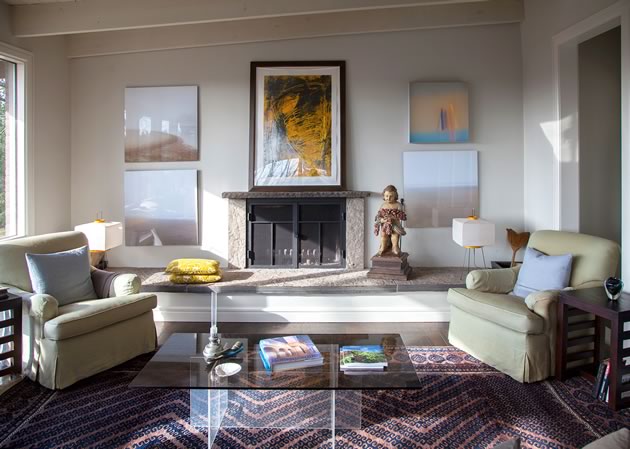 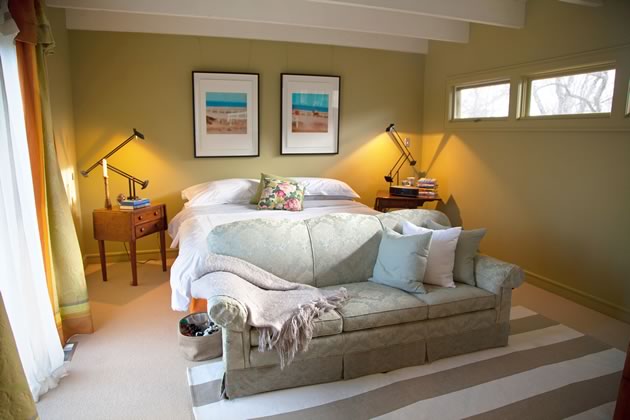 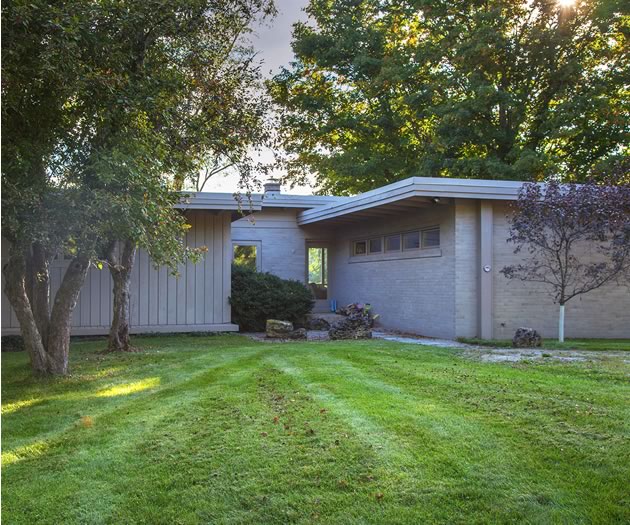 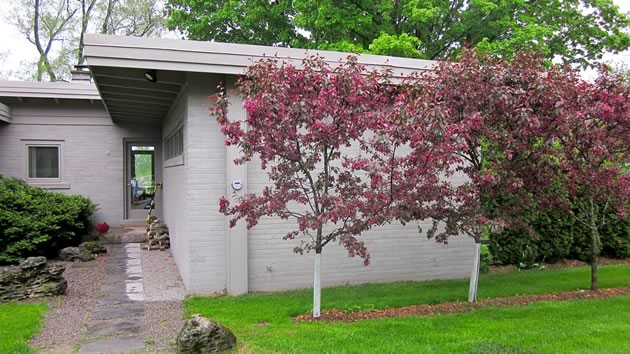 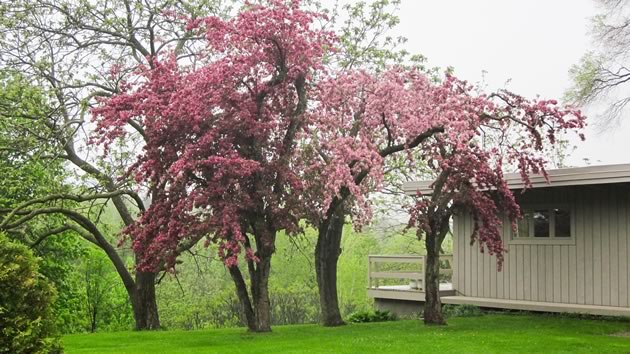 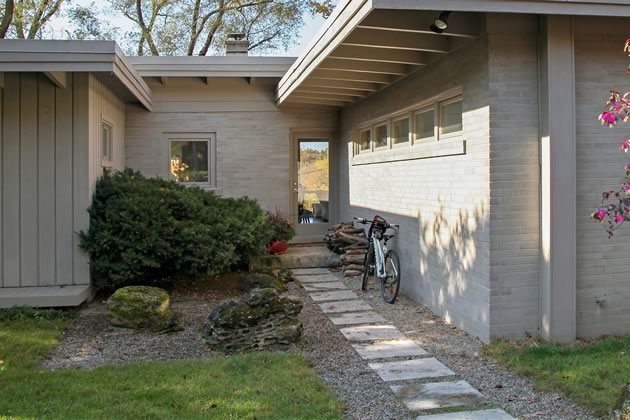 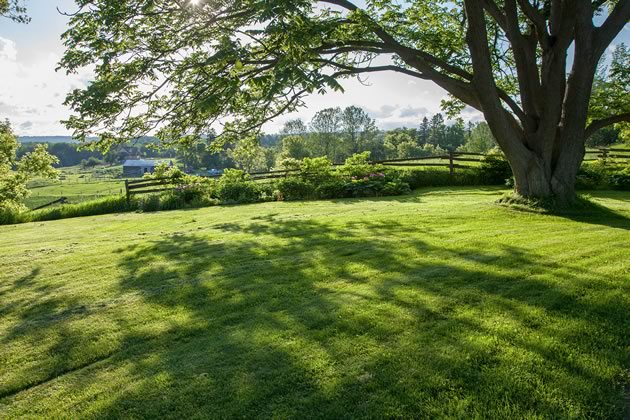 <
►
>
The lower ceiling in the bedroom makes the space feel cozy and safe while windows on two sides admit lots of light. Photo by Pam Purves