How a local feed mill has become the go-to resource for zoos across North America. 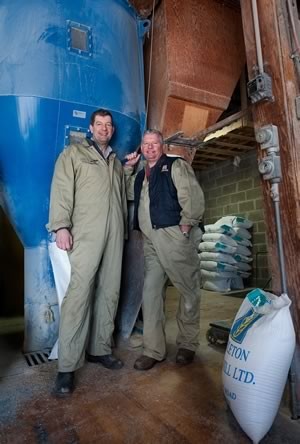 Brothers Alf (left) and Dave Budweth, who grew up helping out in the family feed mills they now own, have evolved their custom equestrian feed business into supplying nutritional blends for zoo animals such as flamingos, elephants, spotted toads and bearded dragon lizards, including food for the crickets the amphibians eat. Photo by Rosemary Hasner / Black Dog Creative Arts.

Keeping flamingos “in the pink” may not sound like a serious job, but brothers Alf and Dave Budweth, owners of Budson Farm & Feed Company in Erin and the Nobleton Feed Mill, have turned formulating food for zoo animals into a vocation.

Tall and affable, with a youthful grin, Alf is the company president and chief spokesperson, while Dave looks after operations: scheduling, deliveries and everything else that goes into looking after the nitty-gritty of their thriving businesses.

Their line of zoo food is called Züküdla, Alf’s conflation of zoo and ukudla, the Zulu word for food. (The umlauts are just a quirky embellishment.) Alf takes Züküdla seriously, but in a most engaging and entertaining way, and his enthusiasm is infectious. His experience creating Gorilla Muffins (simply add water, bake at 350°f for 15 minutes and serve), CricketMax2 and Veggie Bites, meant for zebras, hippos, bison, camels, tapirs and more, is material for a book – or at least a magazine article.

Take Züküdla’s special formulation for flamingos. These iconic birds are pink – orangey pink, really – because their diet in the wild includes copious quantities of brine shrimp and algae that contain carotenoid pigments, which are deposited into their growing feathers. These pigments are what turns shrimp pink when they’re cooked, and they are also responsible for the colour of carrots, beets and other vegetables. (The skin of people too will turn yellowy orange if they eat too many carrots. This harmless condition is called hypercarotenemia or carotenosis.)

When brine shrimp are not readily available, as in a zoo, keeping flamingos their characteristic coral pink is a challenge. Zookeepers often fed flamingos carrots and red peppers until they discovered that adding canthaxanthin, a carotenoid, directly to the birds’ feed keeps them colourful and improves their general health and reproductive success.

With a diploma in agricultural business and a degree in animal science, Alf couldn’t resist the challenge of converting this knowledge into a feed that not only keeps the birds pink but also supplies them with the nutrients they require. Züküdla’s Flaminglo Daily is formulated to ensure strong bones, healthy plumage and vibrant colour. In fact, Alf warns, “You can make flamingos too pink or too pale if you don’t get it right.”

The Budweth brothers’ entry into the zoo-food market was built on their father’s approach to feeding horses. In 1978 Alf Budweth Sr., a King Township farmer, bought the feed mill in Nobleton, a village just east of Bolton.

The senior Budweth, who steered clear of added drugs, hormones and animal byproducts in the livestock feeds he milled, was ahead of his time. His focus on healthy nutrition led him to question the then common practice of feeding a glorified cattle food to horses. With a growing equine industry on his doorstep, he considered the specific nutritional needs of horses, and from this created a line of specialized equine feed. “The horses that ate this food began winning [on the racetrack],” Alf explains. “When you start winning, people start coming to you.”

“When we started,” says Alf, who was nine when he started working at the mill, “we had eight horse products. Now we have more than 40.” By 1985 the modest-looking building erected in the 1950s had become one of Masterfeeds’ leading North American outlets for horse feed.

Alf encourages customers to feed the mill’s formulations to their horses when it is really fresh. “We make the feed in the morning and they dish it out in the afternoon,” he says. And as if it were newly baked bread, the horses love it. Some thoroughbreds stabled at Woodbine Racetrack often refused to eat anything, but they cleaned up the nutritionally correct food – and began performing better as a result.

Züküdla is supplying nutritional blends for zoo animals such as flamingos, elephants, spotted toads and bearded dragon lizards, including food for the crickets the amphibians eat.

This attention to detail and focus on specialty feeds that meet the particular nutritional requirements of individual animals caught the attention of nutritionists at the Toronto Zoo. Consider the task of keeping up with the nutritional needs of zoo animals. Jaap Wensvoort, who leads the zoo’s team of animal nutritionists, explains, “The Toronto Zoo feeds about 5,000 animals some 450 different menus every day.” That’s enough to make any chef’s head spin.

Not many feed mills take the time and have the expertise to come up with the specific formulations required by elephants or gorillas, much less spotted toads, bearded dragon lizards or crickets. So the zoo called Alf because they wanted him to transfer his dad’s exacting approach to producing horse feed to the formulations their nutritionists had devised for zoo animals.

Lydia Attard, the zoo’s curatorial keeper of invertebrates, relied heavily on Alf. Their relationship dates to when Attard, who was already working at the zoo, was conducting research at the University of Guelph for her master’s thesis, which involved studying the nutritional needs of insect-eating amphibians and reptiles.

In North America these animals are often fed domestic crickets, the same near-black ones often heard chirping away in the corners of kitchens during a short Canadian summer. But amphibians and reptiles raised in captivity and fed crickets often have health problems, including bone disease. Attard speculated that a healthier diet could alleviate some of the symptoms. Though the amphibians and reptiles she studied seemed to be getting enough protein, she determined they lacked calcium and were deficient in vitamin A.

So Attard set out to see if she could improve their health by “gut loading” the crickets they consumed with more of the nutrients reptiles and amphibians need. (Gut loading is a practice whereby an animal’s prey is fed the nutrients needed by the animal that eats the prey.) 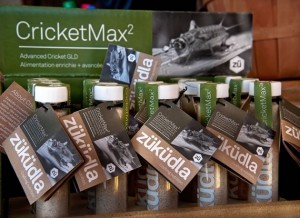 Gut loading is a practice whereby an animal’s prey is fed the nutrients needed by the animal that eats the prey. The result is CricketMax2, one of Züküdla’s hottest products. Photo by Rosemary Hasner / Black Dog Creative Arts.

The result is CricketMax2, one of Züküdla’s hottest products. What Attard formulated and Alf produced is a flour-like feed that crickets love. They gobble up CricketMax2 until their guts are loaded. Then, sadly for the crickets, the amphibians and reptiles have their turn. They devour the fat, juicy crickets, which are chock full of calcium, vitamin A and other nutrients they require. Attard notes it’s best if the crickets are consumed immediately after they gorge themselves on CricketMax2 before they’ve had a chance “to poop it out.”

“The palatability of insect food is not tested much,” she says. Her eureka moment came when the crickets gorged themselves on the feed she and Alf had created. Attard credits much of this success to Alf’s use of a detailed spreadsheet that recorded the exact percentage of each ingredient, though he modestly plays down its importance. Crediting Attard as “the brains behind the diet,” he adds, “She did so much work, it’s unbelievable. She’s taken gut loading to a whole new level.”

No matter who deserves credit for the breakthrough, the two managed to manipulate the mix of calcium, vitamins, minerals, protein and other components until they found the magic combination the crickets liked while serving the dietary needs of the zoo’s insectivorous amphibians and reptiles.

Some of the brothers’ zoo food is still produced at the mill in Nobleton, but as word of Züküdla spreads, Alf finds himself fielding inquiries from across North America. Several Canadian zoos and a half dozen in the United States, as well as a number of private breeders and collectors, now feed Züküdla products. The growth in demand has led the brothers to expand their production facilities to a couple of Nobleton-area warehouses. 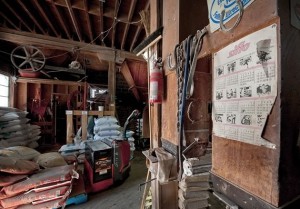 Alf’s enthusiasm for Züküdla doesn’t mean he has forgotten his mainstream business. Both the Nobleton Feed Mill and Budson Farm & Feed cater to livestock owners, providing them with an array of high-quality, carefully formulated feeds.

You can also pick up Züküdla’s latest product, Dog Biscotti. It epitomizes the brothers’ commitment to quality. This “crunchy Italian favourite for your pampered pup” is made from a list of ingredients that would make most health-conscious humans smile: quinoa flour, arrowroot flour, chickpea flour, sprouted ground flax, calcium carbonate, pumpkin purée, whole egg, canola oil and vitamin E.

The impact of the right formulation on your dog or horse, or on a spotted toad or bearded dragon, may not be as readily apparent as on a flamingo, but this doesn’t make it any less important. Regardless of an animal’s colour, the brothers’ goal is to keep them all “in the pink.”

We are a Canadian company crafting superior quality feeds that address the challenges faced by zoos, breeders and collectors alike. Collaborating with animal nutritionists at top institutions and combining talents with our own comparative animal nutritionists, means that Züküdla can design and tailor diets for customers in a quick and cost effective manner. We focus on researching, creating, and marketing the highest quality diets for extraordinary animals.