Can a building have a split personality? If so, the Bolton seniors’ centre might require therapy. A proliferation of signs, mostly Rotary related, at the entrance declare I am about to enter “Rotary Place,” “Caledon Seniors Recreation Centre” and “Rotary Place Seniors Centre.” Mild perplexity about the official name aside, the building has a comfortable and settled look that somehow reminds me of a faintly dowdy but well-loved favourite auntie.

Walking through the entrance doors, I spot what I initially think is a euchre group settling in for an afternoon of cards. Did I say euchre? Not at all. It is in fact a poker game, with each of the four players wearing the intense and focused look of a high roller.

The dream of building the centre began in the early 1990s when an anonymous donor gave the Bolton Rotary Club $100,000 earmarked for seniors. For the club, the donation was something of a mixed blessing. “With just 44 members, the magnitude of financing and building a seniors’ centre was somewhat daunting,” says Don Ogden, who was president of the club at the time.

“But with the help of an extremely supportive community, plus untold hours of volunteer time logged in the planning and execution of golf tournaments, dream auctions and galas over a four-year period, our club managed to raise approximately $250,000,” he says. “With in-kind donations, financial support from other service clubs in the area, plus help from the federal government’s New Horizons for Seniors program, the club finally reached its $500,000 fundraising goal.”

Despite the hairpin turns and dead ends that projects of this magnitude inevitably experience, the building officially opened in 1995.

Activities as varied as table tennis, line dancing, art classes, bridge lessons and games, darts, shuffleboard, and exercise and computer classes are available. The centre is also the meeting place for an outdoor Nordic walking group and men’s and women’s golf in season.

And then there are the excursions. Over the past few years, a group from the centre travelled to Ireland; others enjoyed the fall colours in Haliburton; and still others took in Oktoberfest in Kitchener-Waterloo, as well as theatre events in both St. Jacobs and Toronto. There is a book club and an Italian club, as well as woodcarving, sewing and craft groups. For $5 you can enjoy a soup-and-sandwich lunch three days a week.

Marg Patterson is a sprightly 78 and one of the poker players on the day of my visit. The mother of nine, grandmother of 21 and great-grandmother of 18 is at the centre at least four days a week. She’s usually there by 7:30 in the morning to get everything ready for the centre’s 8:30 opening, and she is rarely home before 4 p.m.

As is the case for many people who use the centre, Marg’s involvement is a mix of volunteer duties and participation in scheduled activities.

For her a typical day starts with setting up the coffee station and prepping the lunch soup. Tuesdays are devoted to baking or making preserves. She ensures the lottery tickets for the group who buy them are in hand, serves coffee and cookies to the table tennis group, and organizes local catering jobs, an additional revenue source for the centre. Depending on the day of the week, Marg will also fit in some bridge, euchre or poker, and often takes part in carpet bowling.

The centre’s mandate is to provide the opportunity for older adults to come together to fulfil their social, educational, cultural and recreational needs. But according to Marg, she is there to meet new people, enjoy her friends and have fun. “I love my involvement at the centre,” she says. “It defines my week. It is my sanity.”

Longtime Bolton resident Henry Maag, 80, echoes Marg’s sentiments. He has volunteered in the centre’s kitchen from the beginning. “Any day I can help out at the seniors’ centre is a good day for me,” says Henry, who has worked as a chef and restaurateur his entire career. He has watched the facility evolve from an “occasional-use” facility in the 1990s to a bustling building bursting with activities that appeal to seniors.

Paraphrasing Napoleon’s words, Henry says with a chuckle, “A seniors’ centre runs on its stomach.” Henry has found his place orchestrating the centre’s busy kitchen.

With the ballooning cohort of active seniors now living in the area, it seems certain that the centre, by whatever name, will continue to be a lively place where old friends meet and new friends are made. 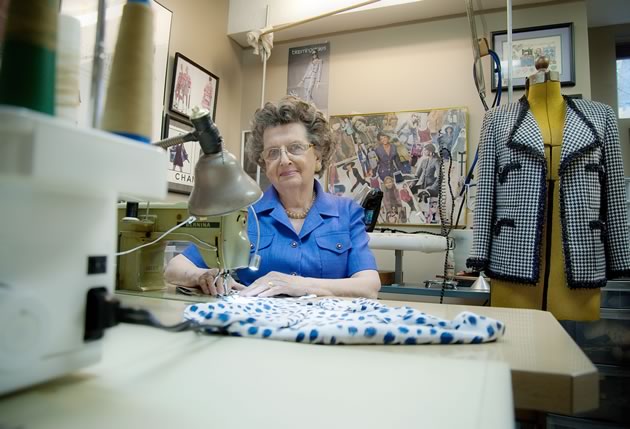 Susan McNeill doesn’t understand boredom. From the moment she opens her eyes in the morning until she turns out the light in the evening, she’s on the go. She believes in making the most of each day.

Her passion is sewing. She has been at it since she was eight years old, making stuffed toys on a treadle machine with her mother’s leftover fabric. She says that was the beginning of her lifelong passion for creative sewing.

In 1954, Susan became the first woman to complete a five-year men’s tailoring course at Toronto’s Ryerson Institute of Technology, now Ryerson University. Her passion led her to the couturier houses on Bloor Street, where she built a loyal following creating exquisite men’s and women’s suits, vests, blouses, coats, skirts and dresses.

After her marriage and the birth of her three daughters, Susan brought her sewing machine, and her business, home.

She sees every piece of fabric as a creative challenge and has made lampshades, purses, wall art, quilts, an oriental robe and even a room divider.

“I can’t stop sewing,” she says with a laugh. A widow for six years, Susan is happiest creating in her sewing room, with the sounds of Benny Goodman, Glenn Miller and other big bands playing in the background. She takes particular joy in Chanel designs and is in the process of creating a designer outfit for each of her daughters.

“Give me a piece of fabric and I’ll show you what I can do,” she says with a twinkle.

Meet one of our community elders in this first of what will be a regular companion piece to Over The (Next) Hill. If you know an elder who should be profiled, send your suggestions to gailgrant at rogers.com.