As much as we might disparage dandelions, the cheerful yellow flowers are a fact of life in Caledon and throughout Headwaters. Spring couldn’t arrive without them. They are as embedded in our landscape as beavers, herons, porcupines and ferns. So it is inconceivable that a dictionary would not define “dandelion” – or any of the words in that list. But such is the case. The Oxford Junior Dictionary, intended for children in the primary grades, has eliminated all those words, along with a host of other nature-related terms to make room for tech terms such as “blog,” “chatroom,” “broadband” and “MP3 player.”

Some even argue that the term “conservation” – as in Credit Valley Conservation or Toronto and Region Conservation Authority – is partially to blame for society’s distancing itself from the very organizations and initiatives that set out to protect nature.

The objective of “conservatism” is to conserve, to maintain the status quo, which is often not what motivates people who revere a particular landscape. What they want, suggests Macfarlane, author of the widely acclaimed book Landmarks, is “nostalgia,” a term he says “laments the prevailing state of things and agitates for change.”

Glenn Albrecht, an Australian academic and environmental philosopher, is similarly dismayed by the shortcomings of our vocabulary. On his website he explains he is developing “a language and conceptual landscape to match the rich range of emotions and feelings people have about nature and place.” His first attempt is “solastalgia,” a word he coined by combining “solace” and “algia,” which derives from the Greek for “pain.” As opposed to nostalgia, which he describes as a feeling of homesickness for a place where you lived in the past, solastalgia is the distress felt when the place where you currently live is destroyed or debilitated by environmental change.

Macfarlane writes, “The natural world becomes far more easily disposable if it is not imaginatively known, and a failure to include it in a literary regard can slide easily into a failure to include it in a moral regard.” In Landmarks, to sum up the role of language in protecting nature, Macfarlane quotes prolific American writer and environmental activist Wendell Berry: “To defend what we love we need a particularizing language, for we love what we particularly know.”

Having grown up in Caledon and spent the better part of two decades actively protecting my landscape, often through my writing in this magazine, I was intrigued by the idea of a “particularizing” language.

Stephen Quilley, a British-born professor at the University of Waterloo, blames Southern Ontario’s poor and shrinking countryside lexicon for our failure to adequately protect our farm fields, forests and villages. His theory is that whereas Canadians revere wilderness and have a rich language for and literature about it, we fail to similarly appreciate and celebrate what I think of as Caledon’s “near wilderness,” for lack of a better phrase.

Quilley is using Caledon as the central focus of a project he calls Hedgelaying in Southern Ontario. To help us revere and hopefully improve our ability to describe our landscape, Quilley took a small group of us to visit the National Hedgelaying Championships in England last October.

Those who grew up or have spent time in Britain will likely be familiar with the hedges that often line rural roads. These hedges are designed, among other things, to be impenetrable by livestock, to provide habitat for birds and small animals, and to improve links between villages. What you may not realize is that each region of England has its own style of hedge. Like local beers or cheeses, hedges in Devon, for example, are constructed differently from those in, say, Yorkshire.

Participants in the trip discovered hedgelaying has a particularizing language, including “pleaching” (a means of interweaving tree branches so they form a solid barrier), “tillering” (the act of making a tree or shrub bushier by cutting it so it produces “tillers” or suckers), and – my favourite – “hefting” (the process by which cattle and sheep learn to identify with a particular landscape so they don’t wander away).

“The natural world becomes far more easily disposable if it is not imaginatively known,”
writes Macfarlane.

Macfarlane admires the Gaels for the elegantly specific terms they use to describe their landscape. Given a copy of Some Lewis Moorland Terms: A Peat Glossary, he learned of some 120 Gaelic words used on Scotland’s Isle of Lewis. They include èit, which refers to “the practice of placing quartz stones in streams so that they sparkle in moonlight and thereby attract salmon to them in the late summer and autumn”; rionnach maoim, which means “the shadows cast on the moorland by clouds moving across the sky on a bright and windy day”; and teine biorach, which is “the flame or will-o’-the-wisp that runs on top of heather when the moor burns during the summer.” 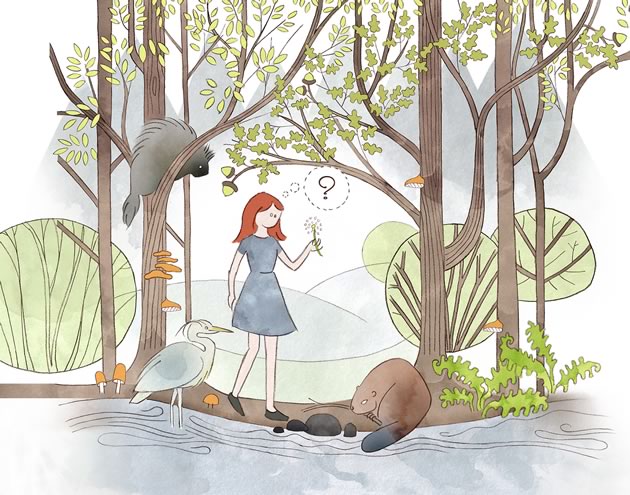 The Language of Nature. Without words, are we lost in the woods? Illustration by Kim van Oosterom.

Here in the hills we are not entirely bereft of a language for our natural landscape. We have “badlands” and “escarpment” and “moraine.” And though these terms aren’t specific in the sense of èit, they would please Monbiot because they elicit a picture when referred to in the context of Caledon. Many of us, for example, share a mutual image of the incised red clay hills banded by greenish shale along Olde Base Line Road, and as governing bodies have discovered, we care passionately about what is to become of that famous landmark.

Most rural residents have heard of the Niagara Escarpment and the Oak Ridges Moraine. But what about the Mayfield or Humberview students who are married to their iPhones, or urban newcomers attracted by spanking new subdivisions built on land where the topsoil has been stripped and farmlands or forests expunged? For them, does the word “badlands” conjure up an image of Cheltenham, or Arizona – or perhaps a bad case of acne?

And does it matter? Macfarlane says yes. “It matters because language deficit leads to attention deficit.” And he adds, “As we deplete our ability to denote and figure particular aspects of our place, so our competence for understanding and imagining possible relationships with non-human nature is correspondingly depleted.”

Journalist J.B. MacKinnon, one of Canada’s most thoughtful nature writers, worries about what he calls the “great forgetting.” In a Q&A with a Harper’s blogger, he wrote, “If you know that whales belong to Vancouver’s past then it becomes possible to imagine their presence in the future. If you aren’t aware of their history, then the absence of whales will seem perfectly normal – natural in fact.”

Already Caledon’s urban population, which outnumbers the rural one, suffers from MacKinnon’s great forgetting. For many residents, accident-proofed playgrounds and chlorinated drinking water are normal – natural in fact.

Although some 80 per cent of Caledon’s landscape is protected from development by one government policy or another, the town is slipping ever closer to becoming “Bramalea with hills.” People who live in the subdivisions that are sprouting like weeds in an abandoned garden may be fine upstanding citizens, but most will have no memory of walking freely over the badlands or across meadows. They won’t have duchthas, a Gaelic word that Macfarlane says means “the sense of belonging in a place” – for a wilder Caledon where nature is normal.

Concerned by the prospect of a Caledon swamped by urban values and frustrated by my inability to convey the passion I have for the place where I was born, I began compiling Caledon’s particularizing language. It would be my contribution to “geophany,” a term coined by British author and cartographer Tim Robinson to describe language that celebrates place.

Then my imagination switched to the idea of creating my versions of èit and teine biorach. This task was electrifying. It caused me to feel as though I radiated with the sunshine collected by a field of intensely yellow dandelions. It was hefting. The exercise required me to think about and picture the specific natural phenomena that make me love Caledon so much, and then invent words to describe them.

My contributions to geophany will never find their way into the Oxford Canadian Dictionary, much less the Oxford Junior, but this unique way of studying the things – great and small – that make Caledon so special may pleach our community, thereby helping us avoid being overwhelmed by solastalgia.

the act of removing the autumn leaf through which a spring ephemeral flower, such as a trout lily or bloodroot, has grown so that its leaves cannot properly unfurl

the delicate layer of opaque, sometimes patterned ice that caps small potholes in a driveway; it is impossible for children and adults alike to resist stepping on and breaking through clisp if only to hear that special crackle as it shatters

Do you have a word to describe a particular feature of the natural landscape in Headwaters?

Please add your own contribution to the geophany of the hills in the comments section below.