Last winter, I hadn’t given much thought to the Region of Peel’s new waste bin program slated for implementation the first week of January.

The three new bins delivered to residents in December did seem huge – they were supposed to accommodate alternating biweekly garbage and blue bin pickups as well as more organics – but I’d lived through a similar changeover in Toronto in 2008, so I wasn’t fussed.

Then came wintery gusts barrelling down Inglewood’s main drag on one of the first January pickup days.

My new four-foot-tall recycling bin toppled on its side, sending cereal boxes, newspapers and yogurt containers blowing in all directions. With the help of a neighbour, I righted the bin and captured most of its contents in a mad dash.

As I caught my breath, though, I worried. Was this going to happen every week?

There were plenty of other Town of Caledon residents miffed at the change – particularly in rural areas. They were perplexed by how to trundle the heavy bins down long lanes, or alternatively, how to lift them, or even fit them, into car trunks.

The new bins were a symbol of how different Caledon is from Peel cities, Brampton and Mississauga, where, we presumed, most residents could easily wheel their bins the short trip to the curbside. 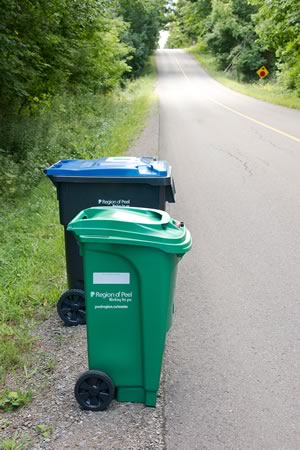 In neighbouring and mostly rural Dufferin County, residents still use the older style of open blue bins, green bins and bagged garbage, and there are currently no plans for any drastic changes, says director of public works Scott Burns. Dufferin also happens to be a leader in waste diversion – keeping items such as organics and recycling out of landfills. It diverted 55 per cent of its collections in 2014. Peel, which has a higher per capita volume of waste, diverted 45 per cent in 2014.

While 88 per cent of residents took Peel up on its offer of choosing bin sizes (small, medium or large) back in 2015, with an option to switch again later on, many of us were scratching our heads about how the change would work in practice.

Local newspapers ran stories about residents reporting their bins missing after following the region’s advice to store them at the end of their drives. Would there be car accidents when bins rolled into roadways? Of particular concern was how snowstorms could throw a wrench in the works, with bins disappearing under drifts or snowplows crushing them.

Then there were reports of broken wheels and green bin locks. And of raccoons easily mastering the loose lids, and squirrels gnawing their way in from the bottom.

What’s more, bucolic Caledon was taking a hit with all those grey and green blobs dotting the countryside. Many of those who see country life as the antithesis of suburbia were less than impressed when a cheery Peel public service advertisement proudly showed a street of houses fronted by neatly aligned bins as “A beautiful sight!”

“Is this what we want Caledon to look like?” Caledon resident Diana Hillman, who lives on a picturesque dirt road, recalls thinking at the time. But her concerns weren’t just aesthetic, they were logistical. She’d spent multiple frustrating e-mail conversations and a visit from the Peel waste staff explaining that while she needed the capacity of the new bins, without a pickup truck, she had trouble getting them to the end of her long, bumpy laneway each week. And thanks to a deep ditch, leaving them at the end of her drive was also a tricky proposition. No wonder Caledon resident Donata Morandi started a Change.org petition to fight the shift.

So, what was Peel thinking?

Erwin Pascual, manager of waste planning at the region, says one goal is to encourage the composting of organics by increasing the size of the green bin and decreasing the frequency of garbage pickup to every two weeks. The participation rate had been in the low 30 per cent range, with residents throwing organics in with their garbage and still staying below the weekly limit of two bags. The new program “makes it a little more difficult for people to hold on to organic material,” he says. Another goal is to reduce the litter associated with the open blue bins.

Cost savings are a major objective. With fewer trucks on the road and fewer workers, the projected contract savings are in the $5 million range on an annual budget of about $40 million. The new contractors are Progressive Waste Solutions and Emterra Group.

Since the bins were designed to be used with an automated lift system, one hoped-for benefit is decreased worker injuries. The new trucks are fuelled by compressed natural gas rather than diesel, for lower emissions.

With 1.2 million carts and kitchen containers distributed to some 320,000 homes in about three months, Pascual says it was one of the most aggressive waste program rollouts of its kind in North America. The department staffed up and revamped their website to promote the program and handle complaints on the phone, on the street and online.

While he won’t know the cost savings until a year of data has been collected, Pascual says the program is already a success on the organics front. About 60 per cent of Peel residents are now using the 100-litre green carts, and organics tonnes collected doubled from January to March, compared to the same period in 2015. (Caledon numbers are not yet broken out of the Peel total.)

“It has surpassed our initial estimates of what we’d see in the first year,” says Pascual.

And many people like their new bins. Caledon nursery owner Lorraine Roberts used to use a dolly to wheel her garbage cans to the roadside. “Wheels on the new garbage cans make it so much easier and faster,” she says. “It takes me a third of the time to put out the garbage. With this new program we have less waste going to landfill sites and more being recycled.”

Allan Wadley says in the first month of use two of his bins had broken wheels and the lock on the green bin was broken, but he saw swift action by Peel. “I reported the problems online and someone came that afternoon to repair the bins,” he says. A few weeks later someone came to check the repairs had been done properly.

Morandi’s petition, it turned out, had just 174 supporters. And while hardly a solution for everyone, Hillman realized she could put out two smaller bins due to a rental cottage on her property and reports she’s managing alright, although garbage day now takes much longer than ever and, unlike Roberts, she admits she’d love to turn back the clock.

Pascual says complaints have died down and many residents have come up with solutions that work for them. One enterprising resident devised a hitch to drive the bins down a long lane, which Peel is openly promoting to other residents.

“We do appreciate our residents’ efforts with this rollout,” he says. “We appreciate their patience.”

And while my bins did topple onto McLaughlin Road once more – rescued by a waste contractor who pulled up and fetched them for me – I haven’t had any other bin-wrestling moments. Here’s hoping my personal statistics hold steady come winter. 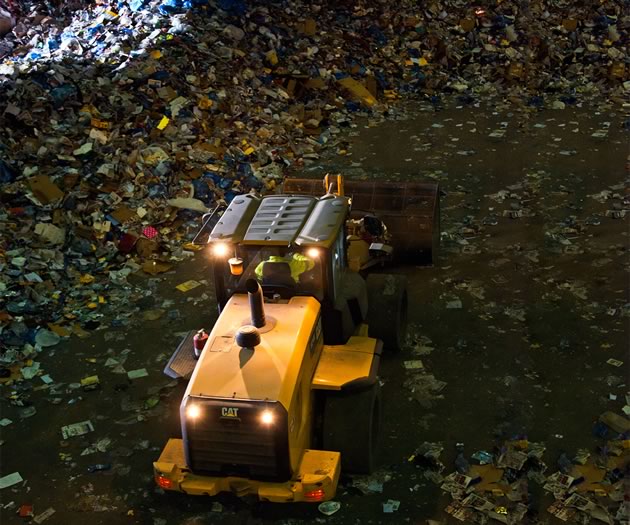 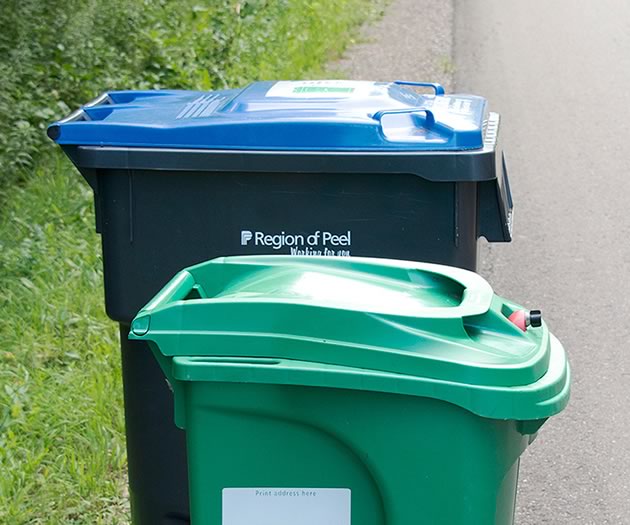 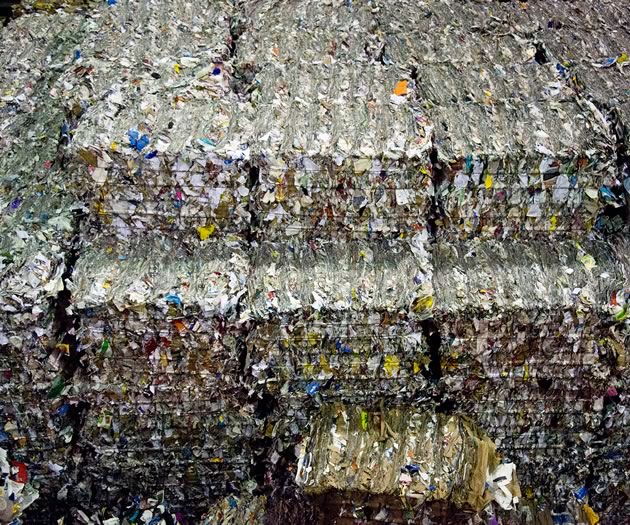