Beth Hunt and David McCracken: Two of our 2016 Local Heroes

Lunch is just wrapping up at The Globe Restaurant on a Monday in early November. Staff in long black aprons bus dishes from the well-worn pine tables as chef Beth Hunt emerges from the kitchen, signs of a busy service all over her black chef coat. 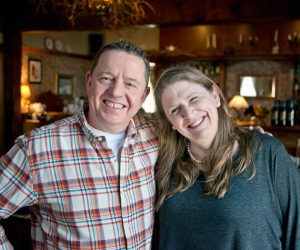 It could be any other day, but it’s not. On October 1, she and her friend and business partner David McCracken sold the restaurant they’ve owned since 1989, along with the Rosemont Hall which they bought about 15 years ago. Today is Beth’s last day.

Asked to reflect on an adventure that started when they were in their 20s, Beth says, “It’s all we ever wanted to do.” Growing up in the area, the two had worked at the restaurant on Highway 89 in Rosemont as kids, and shared a dream of taking it on.

They’ve never strayed far from the Victorian country ethos they inherited, describing the journey as a “tightrope walk” between maintaining continuity and introducing new ideas. Although Beth embraced brighter, fresher fare over the years, they hung onto menu stalwarts such as rack of lamb and steak and kidney pie – comforting old friends they daren’t ditch.

And for those of us who ate there as kids, some of that simple, carby fare is the stuff of Proustian memory – think fudgy “log cabin” dessert or buttery house-made biscuits.

During the time the two presided over a restaurant, a catering business and, more recently, the Rosemont farmers’ market, The Globe became deeply intertwined with the community. Beth and David have worked with local service clubs, kids’ teams and charity organizers, giving widely of their services. They’ve fed folks at church dinners, showers, weddings and funerals – marking all of life’s passages.

In return, customers and friends came to see the place as an extension of their own homey circle. “Our whole social life came to us,” says Beth.

As the new owners, who also run the Rosemont General Store and Kitchen across the street, take over, Beth and David contemplate the future. Immediate plans include some travel, more than a few glasses of Veuve Clicquot, and reinvesting in parts of their lives that all too often took a backseat to running the restaurant.

“Oh, the freedom to go celebrate a family birthday on a Saturday!” says David.

It’s the end of an era and Beth wells up when asked to reminisce about the best times they had. “It’s all about getting around the table. There’s huge gratification in feeding and nurturing people.”

But she and David are also quick to share the comedy that has unexpectedly emerged. David is bunking with Beth, her father and her 13-year-old daughter (her 19-year-old is away at school) because his house was part of the sale. Beth’s civilian kitchen isn’t up to snuff – it took them four hours to make a chicken dinner together. “I had to ask Beth, ‘Do you have a wooden spoon?’” laughs David. “And domestic sinks just don’t work.”

For now, that seems a fine place to leave them, having a laugh.

Tralee Pearce is an associate editor of In The Hills Magazine.
Show 18 Comments